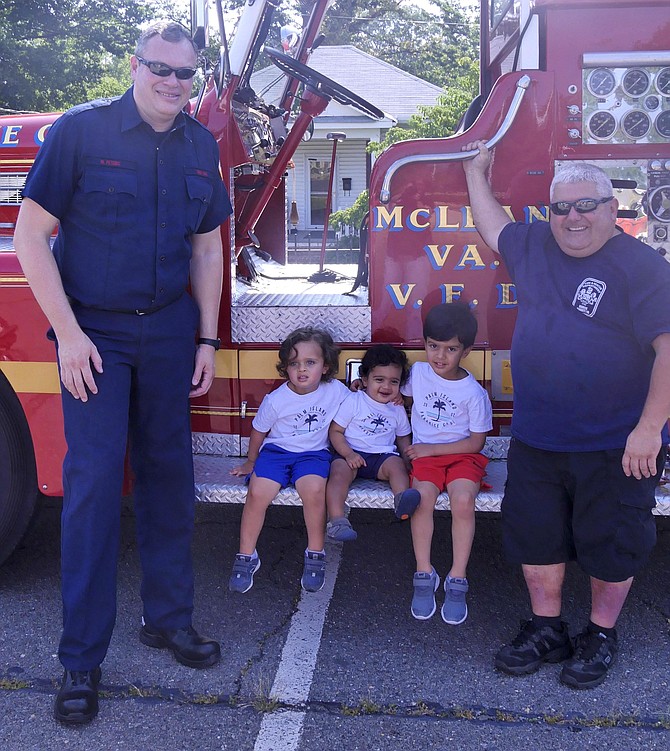 Fire engines lined up in the parking lot of St. Agnes Catholic Church on Randolph Street on Saturday, July 20. Arman, Zain and Rehan Smith stared up at the mysterious silver knobs on the side of the fire trucks while other children climbed into the driver’s seats for a pretend drive to a fire.

The parade would wind through the neighborhood streets and end up at Cherrydale Fire House, where the rest of the festivities included a chili cook-off, a moon bounce, fire truck demonstrations, raffles and Bingo.

The parade kicked off the day-long celebration of the 100-year anniversary of the construction of the Cherrydale Fire House on Lee Highway.

Mike Paris, a volunteer from McLean, says he just received his 30-year pin. He says the good thing about firefighting efforts today is that there is so much research and development to keep firefighters healthy. “So many have heart attacks and cancer.” Now he says they focus on clothing, how it is cleaned, hoses on exhaust. Today he says there are a lot more medical calls. “Fire safety is better and better so there are less fires.”

Cherrydale Volunteer Fire Department Chief Chris Jones said, “Today a lot of our job is fire prevention. We spend 80 percent of our time on education. Look at our area in Northern Virginia. It is one of the safest places in Virginia.” Jones said, “With the new construction materials, Arlington doesn’t really burn.”

Jones says in addition to celebrating their anniversary today, the event is a fundraiser to raise money to refurbish the historical building. “It will take a large dollar amount to keep it going for the next 100 years. For instance, to restore one of the historic windows probably costs $1,500.”