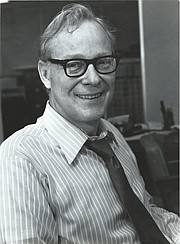 Randall Shoemaker, 91, a Washington journalist for 40 years, died July 6, 2019. He spent the bulk of his career as a reporter, editorial writer, and columnist for the Army Times, the flagship newspaper of the Army Times Publishing Company chain of military and federal government newspapers.

Born in Norfolk, Va., Mr. Shoemaker came to Washington in 1934. Upon graduating from Western High School, he went to work for the Signal Security Agency, the predecessor of the National Security Agency, and spent the summer of 1945 decoding Japanese messages. This experience won him quick promotion when he joined the Army in 1946. As a Specialist 4 during the occupation of Japan, he served as the night supervisor of the message center in MacArthur’s headquarters in Tokyo.

After leaving the Army, he went back to work briefly at the renamed Armed Forces Security Agency and took a bachelor’s degree in history at George Washington University. He began his newspaper career in 1952 as a researcher for Jerry Kluttz, a Washington Post columnist. That same year he married Dorothy, his wife of 44 years, who died in 1996, and began his 65 years of residence in Alexandria. In 1954, he became a reporter covering crime stories for the Alexandria Gazette.

Mr. Shoemaker started work as a reporter for the Army Times in 1956. One of his scoops concerning military policy during the 1960s made it onto Walter Cronkite’s nightly news broadcast. When Secretary of Defense Melvin Laird (1969-1973) made a national base tour as part of his overhaul of the Defense Department, Mr. Shoemaker was one of six reporters chosen to accompany him. He was also the face of the Army Times in a full-page branding ad that ran in the New York Times with the headline, “Pretty boring stuff … unless you are one of the 7 million readers …” He spent the last 10 years of his career writing editorials and a weekly column on retirement matters, which readers voted the most popular feature in the paper. After retiring in 1990, he continued writing the column on a reduced schedule for three years.

Mr. Shoemaker’s hobbies included reading (amassing about 12,000 books), Dixieland jazz, and popular music (of which he had an exhaustive knowledge). He was a longtime member of the Washington Science Fiction Association and, with his wife, of the Potomac River Jazz Club.

He is survived by two sons, Michael and Daniel, of Manassas and Arlington respectively; two grandchildren, Lori Anne and Stephanie; and two great-grandchildren. A private memorial will be held.