The Sting of Shakespeare’s Intent in Alexandria
Votes

The Sting of Shakespeare’s Intent in Alexandria

Metropolitan Homeschool Productions is optimistic about relationships in “The Taming of the Shrew.” 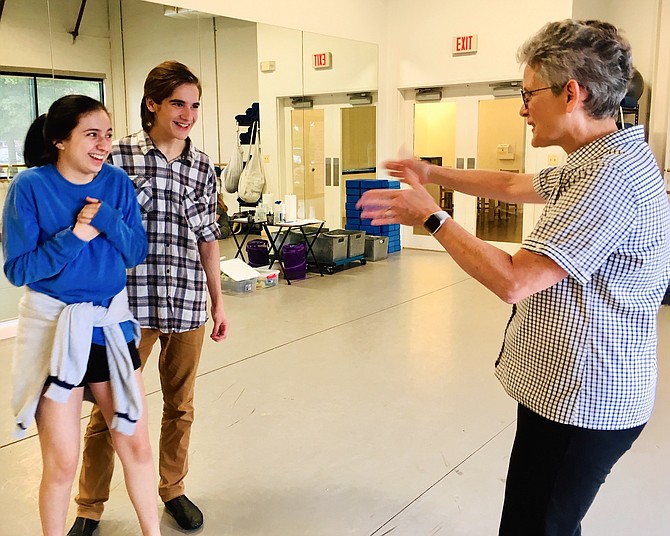 Annie Farias (as Katherina) and Lewis Bliss (as Petruchio) rehearse a scene from “The Taming of the Shrew” with director, Barbara Schwartz. Photo by Diane Sebastian

“If I be waspish, best beware my sting!” warns Katherina in “The Taming of the Shrew.”

The sting of Shakespeare’s “The Taming of the Shrew” is that it is a madcap examination of marriage, gender, and the social climate of the Elizabethan period. Sparking controversy because of the plot that, on face value, puts forward submission under abuse, Metropolitan Homeschool Productions (MHP) will bring the zany humor of this Shakespeare classic to life later this month at the Metropolitan School of the Arts’ Black Box Theatre in Alexandria with a production directed by Barbara Schwartz.

Set in Padua, “The Taming of the Shrew” relays how eager suitors — including the scholarly Lucentio — pursue the father’s, Baptista, lovely daughter, Bianca. Informed that Bianca’s ill-tempered sister Katherina (Annie Farias) must marry first, a negotiation for Katherina’s marriage with the “gentle” man Petruchio (Lewis Bliss) is made, and so the craziness begins.

“The Taming of the Shrew” is one of Shakespeare’s earlier comedies in the style of Commedia dell’Arte, which was an Italian theater form that relied on parodied characters and situations. For example, the vecchi were old selfish men like Baptista, and the innamorati were young lovers like Bianca and Lucentio who must overcome the vecchi. However, what makes this play unique is that the two leads, Katherina and Petruchio, don’t fit these stock parodied forms — they’re characters with complex motivations.

Schwartz believes that especially this play of Shakespeare’s should be taught and directed within its historical context. Bad-tempered women had to face punishments like carting — a public shaming by being carried through the streets in a cart wearing a metal bit. “Looking at it through an Elizabethan lens,” said Schwartz, “Might help us understand that, while treatment toward women in their society was not at all favorable (and things haven’t improved much in some parts of the world), we should give Shakespeare a little credit for trying to correct some of the sins of his time.”

“The Taming of the Shrew’s” main plotline is how Katherina and Petruchio find each other equals. Instead of trying to update the play, Schwartz would rather that the students “walk away from a period piece with a better understanding of that culture.”

With that being said, MHP will perform “The Taming of the Shrew” as the Commedia dell’Arte play it is — as Schwartz put it, “a tongue-in-cheek, slapstick poke on marriage and societal norms … all wrapped up in Shakespeare’s never-wavering theme that true love … should reign supreme.” Instead of being cynical about the Katherina’s controversial ending speech, in which she says, “Thy husband is thy lord, thy life, thy keeper, thy head, thy sovereign,” (Act V, Scene II) Schwartz chooses to be optimistic.

“The script suggests,” Schwartz said, “that as the final curtain falls, Petruchio and Kate are in harmony with each other. The lesson learned is that a balanced partnership in marriage is preferable to one that manipulates or dominates.”

“I hope that our audiences will be less quick to judge the play if they understand that there is a logical transformation in Kate and Petruchio’s relationship,” said Schwartz. “Ultimately, I want … our audiences to see this play as a fun parody of marriage and family relationships, and what, according to Shakespeare, constitutes good ones over rocky one.”