‘Time for the Town to make a real commitment to the Arts,’ said Mike O'Reilly, Chairman of Arts Herndon. 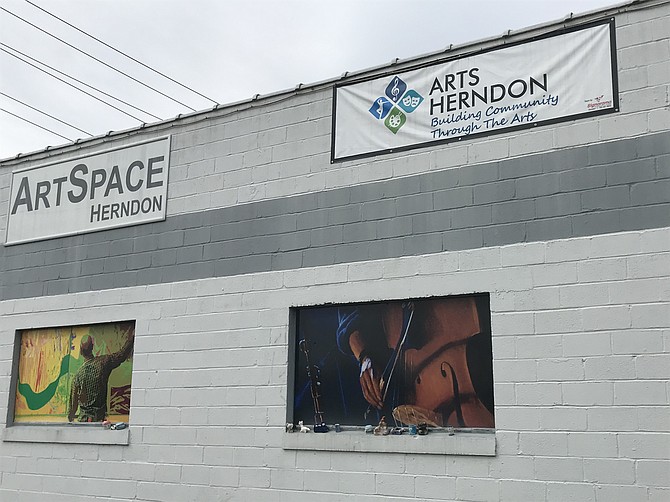 Arts Herndon operates ArtSpace Herndon, its local nonprofit gallery, performance and studio space. The organization requests $150,000 from the town to fund programs and overcome hardships caused by uncertainties it faces due to pending relocation and buildout of the new Herndon Art Center, part of the proposed Downtown Redevelopment Project. Photo by Mercia Hobson.

During the most recent Herndon Town Council work session, held March 5, Town Manager Bill Ashton provided the Council with a request from Arts Herndon for $150,000 submitted by Mike O'Reilly, Chairman of Arts Herndon, to Mayor Lisa C. Merkel and copied to the Town Clerk and him. In the letter, O'Reilly requested funding be added "as a line item" in the proposed FY 2020 Budget, "or wherever would make the most sense from an accounting perspective, but it needs to be included."

Ashton said, "When I read [the letter] I saw two distinct asks, … a functional ask … which caused me a little queasiness, and that's why I sent the question to the Town Attorney about a line item, and then the financial aspect."

In his letter, O'Reilly explained why he requested the line item. "In years past, Arts Herndon (The Council for the Arts and the Foundation for Cultural Arts) requested and received grants under the town's grant program. That program has limited funds that are shared with HCTV, Next Stop Theatre, and various school band and other programs. This year needs to be different."

As for funding purpose and need, O'Reilly stated Arts Herndon would use the $150,000 to expand programs and "help Arts Herndon overcome the hardships visited on our organization by the uncertainties we are facing about relocation and buildout of the new Herndon Art Center."

A REVIEW of the two most recent Town of Herndon approved budgets, FY 2019 and FY 2018, agreed with O'Reilly's statement of limited funds in the grant pool. It also revealed a decline in the number of organizations which received funding in FY 2019, compared to the previous year. Records show a total of five organizations out of fourteen received grant funding in FY 2019 compared to twelve organizations out of fourteen in FY 2018, even though the total "adopted" cash for the two fiscal years increased from $203,000 to $218,000 respectively for the grant program.

Herndon Community Television (HCTV), another nonprofit organization based in the town, received the bulk of the available grant cash, $97,000 in FY 2018 and $113,000 in FY 2019. HCTV provides live broadcasts of Town meetings and special events in the chambers and covers community events.

In a request for clarification, Anne Curtis, Public Information Officer said, "[Ashton] did convey to the council the town attorney’s advice that inclusion of Arts Herndon in the town’s budget as a line item may run afoul of the Virginia Public Procurement Act, and therefore proposed that the council consider it as a grant request."

Town Councilmember Jennifer Baker said, "As for the grants, my suggestion is that we get back to the business of government.” Baker said her suggestion is to fund HCTV as a grant item because there is not another line for funding it in the budget and because the organization provides a government service, filming town meetings and such. "Other than that... eliminate or dramatically scale back the other $118K... potentially to zero ...as we look at things being tighter.” Baker said if the council cut $100K from grants, it could pay for a new risk manager or another police officer in the town. "We can focus on the business of government as opposed to grants."

O’Reilly said, when reached for comment after the work session, "Arts Herndon and its predecessor organizations have a very long history of working in and with the Town to support arts education and programming in the greater Herndon area. As our community moves forward with the downtown development, we are facing tremendous obstacles and opportunities. Recognizing the support we have received in the past from the Town Council, we decided to give the Town the opportunity to increase its support at a critical time for the arts in Herndon," said O’Reilly.

FURTHER council and staff discussion of the proposed budget is scheduled for the March 19 Work Session according to Curtis. Individuals can provide remarks during Comments from the Audience held during the Town Council Public Session or by contacting the town directly. " Curtis stated Ashton would formally present the proposed FY 2020 to Council as per law by April 1.

Town Council Public Hearings are webcast and are cablecast live on Herndon Community Television (HCTV). A video is not available for Town Council Work Sessions, but audio is available. All correspondence should be sent to the Town Clerk's Office at town.clerk@herndon-va.gov.