Facility expands the number of beds available in Region 1. 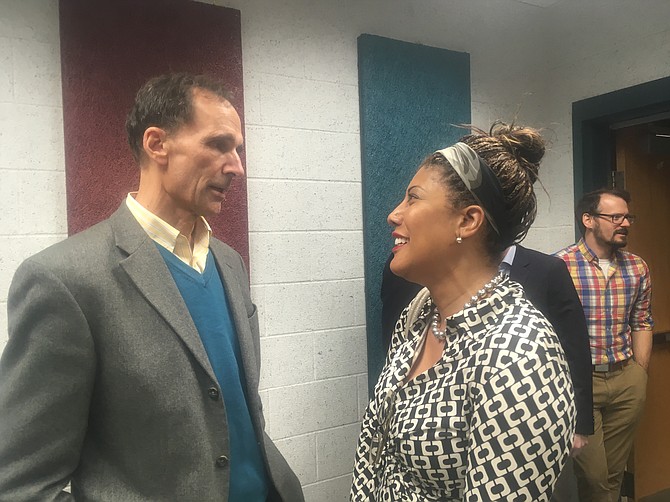 The number of domestic violence shelter beds went from 54 to 90 in the Mount Vernon area this week, as officials cut the ribbon on pictures of the

One of the cakes at the event reflected the upbeat feeling.

new Artemis House facility to keep the location secret and its tenants as safe as possible.

“Today is a start for all of us in Fairfax County to move forward,” said Fairfax County Executive Bryan J. Hill at the ribbon cutting on Monday, March 25 in the Mount Vernon Governmental Center. One in four women are victims of domestic violence and one in seven for men, he said.

“This is one step of many steps we’re going to take,” Hill added.

Stone and Sales were behind this effort early on with the help of Mattie Palmore, and the three earned a nickname in the process. “They were fierce advocates, calling themselves the ‘three musketeers’ and working tirelessly with county staff to get our new area shelter opened,” Storck said.

There are four regions in Fairfax County and Mount Vernon is part of Region 1. There are shelters in Region 2, and none in two of the county’s

other regions. “All four regions would be wonderful,” said Zollicoffer. “Domestic violence touches every socioeconomic sector.”

At the Department of Family Services, there may be facilities like the shelters that aren’t known by some, so getting activities like this ribbon-cutting was one way to spread the word, according to Kendra Lee at the department. She credited Storck and McKay as driving forces behind this new shelter, which actually opened in February. “They’ve been very instrumental in getting this opened,” she said.

There are two domestic violence shelters in Fairfax County: Artemis House and Bethany House. Both shelters are in undisclosed locations, meaning the addresses of the shelters are not given out to the public. Emergency shelter is temporary shelter available to domestic violence victims that offers a safe and secure environment while victims figure out their next steps and make longer-term living arrangements as they recover from trauma.