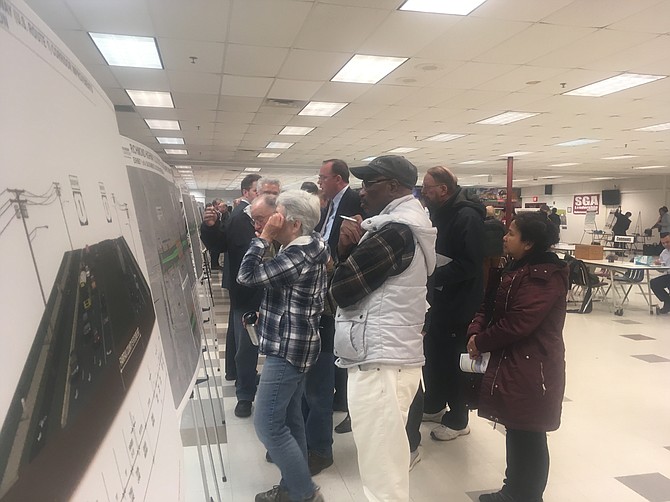 The Route One widening project brought out interested members of the community. Photo by Mike Salmon. 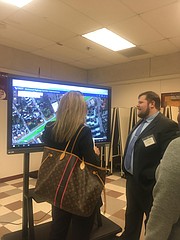 Engineers use maps to explain the project.

Richmond Highway between Jeff Todd Way and Sherwood Hall Lane. The recommended design will widen the road from four to six lanes, provide bike paths and sidewalks on both sides of the road, and reserve the median width necessary to accommodate Fairfax County's future Bus Rapid Transit plans for dedicated bus-only lanes.

“Route 1 in general has needed an uplift, hopefully it will stimulate more business development,” said Bill Roper, a Mount Vernon resident who came to see the details of the project.

“The way they have it designed right now is wonderful,” said Anne Street who lives off Mount Vernon Highway. She was looking at the plan near Buckman Road where there is a pedestrian path planned to go under Richmond Highway. “They’re going to have to deal with human behavior,” she added, noting that people may just run across the highway anyway, as they do now. “It’s dangerous and there have been some accidents, but will they go down the ramp to the path under the road?” It’s one of the situations VDOT is addressing.

The path will be under the new Little Hunting Creek Bridge, which is planned to be bigger and longer than the old one but the idea hasn’t gone over well with the residents. “There’s an expense associated with this,” said project manager Dan Reinhard. Another path under the new bridge planned for Dogue Creek is being looked at too — will people take the ramps and walk under there at night? “Especially women at night,” said one woman during the comment period at the meeting.

The audience for this “design public hearing” filled the auditorium at Mount Vernon High School on March 26, as engineers discussed the 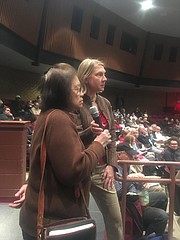 Comments from the audience varied in nature.

particulars of the project. The purpose is “to increase capacity, safety and mobility for all users,” said the project pamphlet that was handed out in both Spanish and English at the meeting.

Keith Kerr, from Mount Vernon Manor, was worried about their trees but was glad something was being done. “We’re anticipating more noise and light,” he said. The sound wall plan is still being finalized as well. There was talk of putting the utility lines underground as well, which would add to the final price tag.

When it came time for questions from the audience, the line went back to the door. Topics included bike paths, access to public transportation, turn lanes, signal patterns, and excess traffic on Telegraph Road which runs parallel to Richmond Highway a few miles to the west.

“We are looking at making some improvements at Telegraph and Hayfield,” said Tom Biesiadny at Fairfax County Department of Transportation.

The schedule for the $372 million project is to complete the design this spring, begin utility relocation in the winter of 2020, begin construction in summer 2023. The new lanes are scheduled to open in 2026.

Comments will be accepted through April 26 by email to RichmondHighway@vdot.virginia.gov or by mail to Dan Reinhard, P.E., Virginia Department of Transportation, 4975 Alliance Drive, Fairfax, VA 22030.