Road projects are spread throughout County. 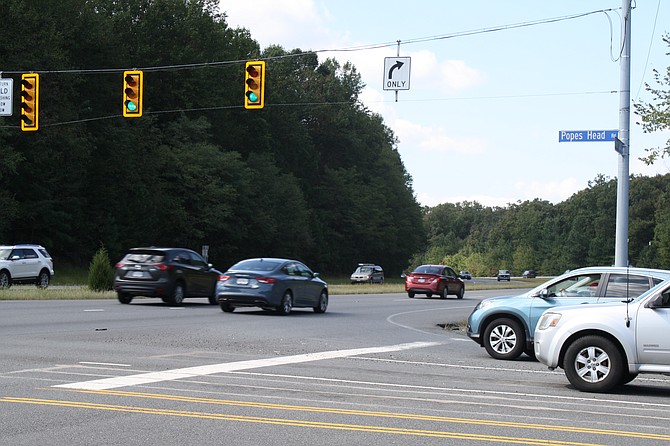 The intersection of the Fairfax County Parkway and Popes Head Road is a focal point of one of the four projects. Photo by Mike Salmon. 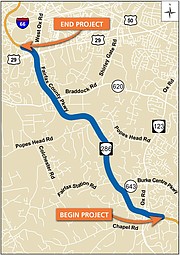 Fairfax County Parkway will get an additional lane in this area where traffic backs up on a daily basis.

Transportation in Fairfax County got a boost lately when the Northern Virginia Transportation Authority moved forward on four projects in the county that are designed to help traffic congestion.

The four projects are the Richmond Highway Widening from Mount Vernon Memorial Highway/Jeff Todd Way to Sherwood Hall Lane in the Alexandria section of the county; the Rolling Road Widening project from Hunter Village Drive to Old Keene Mill Road in Springfield; Fairfax County Parkway Widening from Lee Highway (Route 29) to Nomes Court; the Soapstone Drive Extension from Sunset Hills Road to Sunrise Valley Drive in Reston. The Soapstone Drive Extension is a Fairfax County DOT project, and the other three are state projects and are listed currently on the Virginia Department of Transportation webpage under “In Design.”

According to the NVTA, these projects were picked because they compared the congestion reduction relative to the cost of the project, and these four projects are aimed at reducing congestion which is a quantitative factor referred to as Congestion Reduction Relative to Cost (CRRC) impact of the respective projects, looking out to a 2040 horizon, NVTA said. With the backing from the NVTA, the funding will be in place to the completion of the project, said NVTA’S Monica Backmon.

That doesn’t mean bulldozers will roll out any sooner than originally planned, but funding will be in place and that “definitely helps getting to the ultimate goal which is completion,” Backmon said.

NVTA’s revenues result from legislation enacted by the Virginia General Assembly in 2013 via House Bill 2313, which taps into three existing taxes – Sales Tax, Grantor’s Tax, and Transient Occupancy Tax – which were increased in Northern Virginia to generate the NVTA’s annual revenues of approximately $300 million. In addition, the NVTA can finance projects through the issuance of long-term bonds. NVTA revenues would be used to repay debt service on the bonds.

The Richmond Highway Widening project is a $372 million project that will widen Richmond Highway from four to six lanes, add separate bicycle lanes and sidewalks on both sides of the road, and reserve median width to accommodate Fairfax County's future dedicated bus-only lanes.

The Fairfax County Parkway Widening project includes work on the Popes Head Road interchange which is presently a big chokepoint for traffic on the parkway. Officials are looking at several different options for the interchange but are leaning towards the option with triple roundabouts that will allow traffic to flow freely via two new bridges over Fairfax County Parkway. The rest of the $290 million project will widen about five miles of Fairfax County Parkway from four lanes to six between Route 29 (Lee Highway) and Route 123 (Ox Road). Construction is scheduled to begin in late 2022.