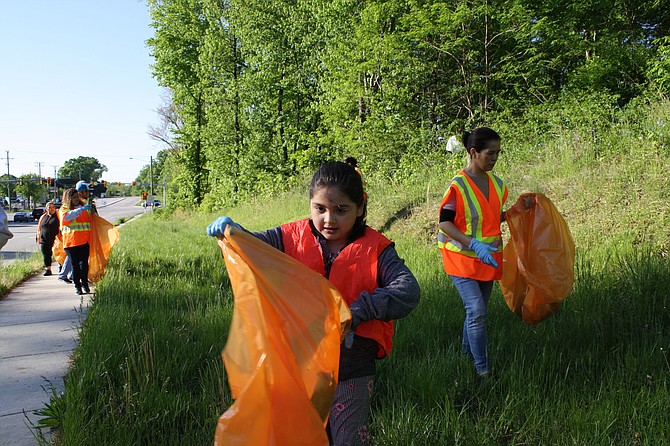 It was an all-age activity cleaning up Jeff Todd Way. Photo by Mike Salmon.

There doesn’t seem to be a shortage of trash on the roadside of Jeff Todd Way in Mount Vernon so the spring clean up on April 27 brought out local volunteers who pulled together, fostering a spirit of community while they scoured the roadside.

The road between Telegraph Road and Richmond Highway was named after Jeff Todd, a Mount Vernon community leader who was killed in a car accident in 2011, and the clean-up event has been held every year since. Organizers included the Mount Vernon-Lee Chamber of Commerce and Fort Belvoir Installation Command. Volunteers and police escorts met at the Candlewood Hotel. Some were transported by van to the Telegraph Road area, and headed east while others walked over and started at Roy Rogers, heading west and they met in the middle. The sun was out, and so was the spirit of community.

Why are you volunteering to join in the clean-up of Jeff Todd Way?

“It’s part of our community, we want to keep it looking nice.” — Robin Highfield and Matt Giehill from Baywood Hotels

“It’s part of the community and you have to keep it clean” — Cristina Nativi, a Walmart employee