‘Potentially a Disaster’ in Alexandria?
Votes

‘Potentially a Disaster’ in Alexandria? 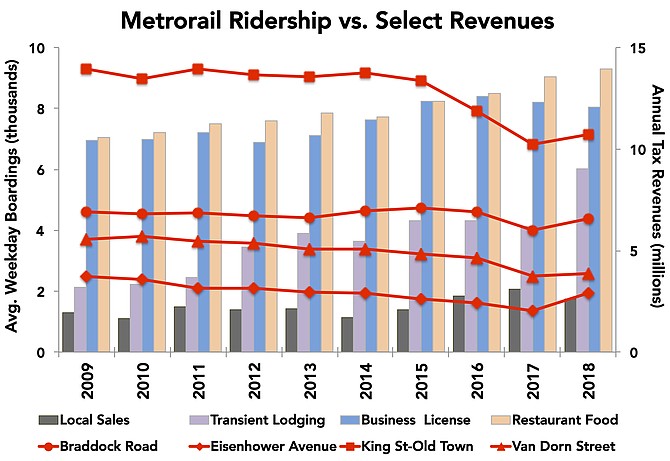 WMATA, the regional transit authority, announced the extension in a press release on Thursday, April 18. Council members expressed indignation that they weren’t consulted, grilling Metro administrators about the extension at council’s legislative meeting on Tuesday, April 23.

“The announcement last week really was dumbfounding for us, especially the way it came out, without any kind of pre-coordination, without any discussion, without any consideration of alternatives,” said Mayor Justin Wilson. “It prompts, quite rightly, very valid questions about whether everything else we’re telling the community about this shutdown is true and will meet reality.”

Despite assurances from Metro staff, Councilman John Chapman lacks confidence the extension will only last the advertised six days. He’ll tell Alexandria constituents to expect an extra month, he said.

“This is going to cost us significant lost revenue and it’s going to threaten the viability of businesses we have in our community,” said Wilson. “My very real concern, given the [lack of planning] diligence that occurred to get to this point, we are very likely to see additional surprises when you get started. … If this last months longer, this is a disaster for this city. This is absolutely potentially a disaster for us.”

According to city spokesperson Craig Fifer: “In late 2018, Visit Alexandria commissioned a study by Smith Travel Research (STR) on the likely impact of the summer closure. STR projected a 13.5 percent loss of revenue per available room for the months of June, July and August. Applying that to hotel revenues and city tax receipts, that comes out to $8.6 million in reduced hotel revenues and $576,000 in reduced lodging tax receipts to the City. At that pace, the six additional days would bring another $510,000 in lost hotel revenues and $34,000 in City tax receipts. Keep in mind this is only looking at the economic impact of lost hotel stays, and not other potential impacts to City tax revenue or to the private sector.”

On the other hand, declining Metrorail ridership over the last decades hasn’t stopped the city’s revenues from rising. In particular, the city’s transient lodging tax revenue has nearly tripled, whereas total ridership between the city’s Metro four stations has decreased by 15 percent on average — by 24 percent at the King Street station, by far the city’s busiest.

Regarding these data, Kaiden said: “Metro is an important asset that affects Alexandria’s appeal to visitors and residents. But it’s just one aspect. There are many factors that impact lodging tax receipts (e.g., promotion, media coverage, overall growth of travel). And there are many factors that impact Metrorail ridership (e.g., gas prices, telecommuting trends, Metro’s performance and safety record). So, while it may be difficult to quantify the exact correlation between transit access and tax receipts, that does not mean it’s absent.”

The extension stems from an increase in the scope of work over what Metro originally anticipated, according to Joseph Leader, the transit authority’s COO.

“It’s a very difficult operation,” he said. Workers will have to jack up the Braddock Road Metro station’s 1.6 million pounds and adjust structural concrete-and-steel, in order to make the platform level with the train.

“Why were you not aware of this?” Wilson asked Metro officials. “I assumed — naively, apparently — that you guys had done the work to determine the scope of that work. What I’m hearing now is that did not happen.”

Asked if council could establish any structural carrots/sticks to incentivize/penalize external entities (like Metro) for decisions those entities’ make that have a ripple effect on the city, Wilson said no.