An inspiring collaboration of music, visual and literary arts. 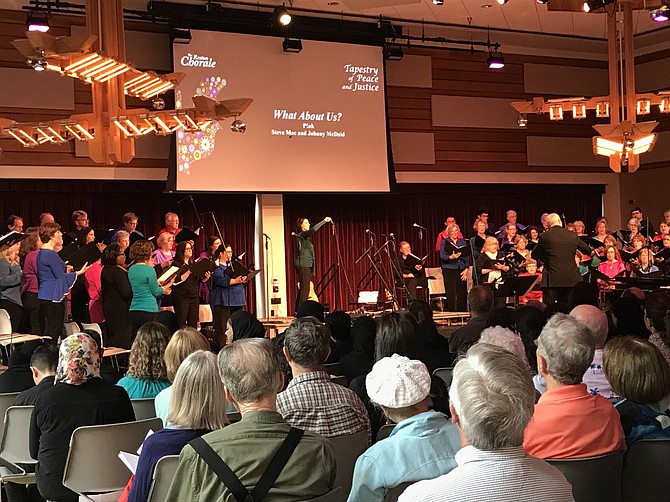 The Reston Chorale, conducted by David B. Lang, sings "What About Us?”, music and lyrics by Pink, Steve Mac and Johnny McDaid with Malika Evans, Soloist. Photo by Mercia Hobson.

Artwork by Alessandra Ricci, "Starving for Peace," oil on double canvas inspired by the theme for The Reston Chorale's Tapestry for Peace and Justice concert.

“What do we mean by that … Perhaps John Lennon said it best when describing his iconic song, ‘Imagine,’” said Maggio. “Imagine a world at peace without the barriers of borders or the divisions of religion and nationality," said Maggio quoting the song by Lennon.

Inspired by the performance theme, four members of The Poetry Society of Virginia read their original poems between songs, among them Susan Notar who presented "Blue Ridge."

Works by nineteen artists from The Reston Art Gallery & Studio and the League of Reston Artists hung on the walls surrounding the performance area. The visual artists, like the poets, created their works inspired by the program's theme.

Artist Alessandra Ricci painted "Starving for Peace," oil on double canvas, that depicted a crying dove held in the teeth of an unidentified person, head wrapped in a lilac cloth of white peace signs.

The second youth choir was ADAMS Beat, possibly the first Mosque Muslim youth choir in America, under the direction of Hurunnessa Fariad.

Before the second half of the concert, Reston Chorale Board President Ruth Ann Pinkman said how each year, Reston Chorale awarded the Robert E. Simon Music Scholarships to local high school and college students. "These talented singers are selected by audition and perform with us throughout the season. They also receive a financial scholarship that can be put toward their education fund," she said. "This season, we've enjoyed having three South Lakes High School students sing with us, Chelsea Camacho, Audrey Webb and David Whomsley. Chelsea couldn't be here today, but David Lang and I are pleased to present scholarships to Audrey and David."

The Reston Chorale's next concert is "A Star Spangled Salute,” Saturday, May 25, 7-9 p.m. at the Reston Town Center Pavilion.