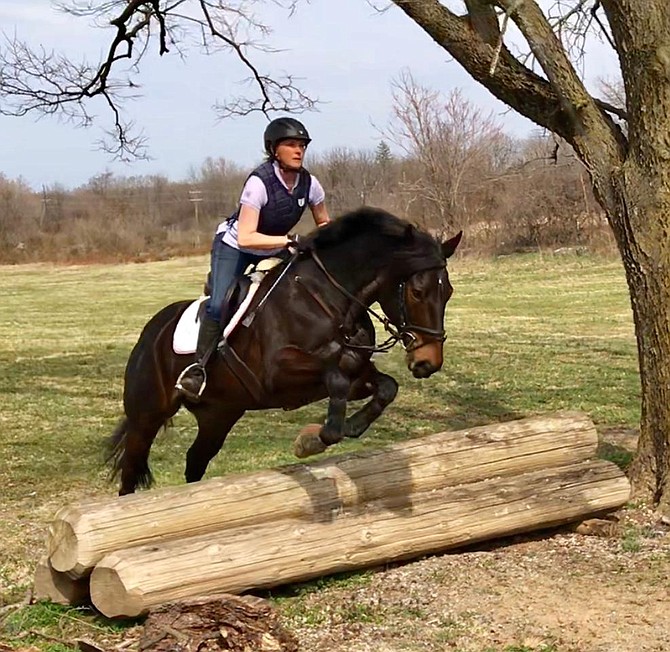 Nicole Doering jumping with her horse in Berryville, Va. Photo by Lisa Reid 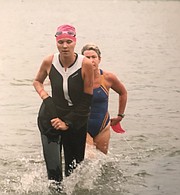 Nicole Doering participating in the swimming portion of the Lum's Pond Triathlon. 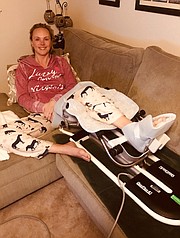 Nicole Doering recovering from hip surgery. She is using a motion machine one day after surgery.

When you’re an athlete, you’re used to overcoming obstacles, such as pushing to a new level to overcome your record for a personal best. But sometimes the obstacle is your own body. And the help you need must come in the form of a surgeon.

Such is the experience of 41-year-old Springfield resident Nicole Doering, who has undergone two hip surgeries at a young age. Despite these health obstacles, the extremely active jock, who graduated from JEB Stuart High School in 1996, continues in an array of fitness pursuits.

In her late twenties, Doering, who was living in New York at the time while working as a model, began to feel a significant amount of pain in the back of her right leg.

“I thought it was high hamstring pain. The shooting pain would go through my whole back side,” she explained.

She found it painful to wear high-heeled shoes when modeling. Initially, she thought she had pulled or torn a muscle. Then, she went to a few doctors until she saw one who diagnosed her hip as the problem and told her she would need surgery.

“When I heard that, I thought it was the craziest thing,” Doering said. “I was only 29 years old!”

THE SERIOUS RUNNER who played soccer throughout her childhood learned she was suffering from hip impingement, a condition in which the ball and socket of the hip joint are affected by contact and friction, leading to pain and joint damage. Known as femoroacetabular impingement, or FAI, the condition is partially genetic, according to Doering, but was exacerbated by her devotion to high-impact sports.

The first surgery had her down for a while but not out. Once healed, she went right back to half-marathons of 13 miles and triathlons that require participants to run, bike and swim.

Fast forward more than five years, she began experiencing pain again. Now living in Northern Virginia and 35 years old, Doering was running and spending a lot of time horseback riding. She managed the pain by cutting out half-marathons and stuck to triathlons to keep running distances under 10 miles

“I started feeling pain in my other hip. Sometimes, it was so bad, I would want to cry,” she noted.

She always suspected that her other hip might need surgery one day due and that began to look like more of a reality. Eventually, the pain became overwhelming and Doering found she could not get comfortable whether she was walking, standing or sitting.

She then met Dr. Andrew Parker, who operated last year on her other hip. But this surgery was a much smoother experience.

“For my first surgery, the post-op pain was excruciating but this time I was able to transition to ibuprofen only three days after the surgery. Dr. Parker was great,” said Doering. “I will never let another doctor operate on my hips.”

Now a senior contract manager for a nonprofit helping people with intellectual disabilities, she had told her surgeon that she wanted to train after the operation for her favorite triathlon, which takes place annually in Pennsylvania.

To recover from the surgery and train for the race, Doering diligently completed her required physical therapy and started limited upper body workouts at the Gold’s Gym in the Bradlick Shopping Center of Annandale, where she’d been a member for years.

“I used Gold’s as my second rehab place. Within one week after surgery, I was at the gym. It gave me a sense of normalcy,” she said.

She explained that the manager suggested exercises and her bootcamp leader modified exercises for her. But, first, they talked with Doering about her recovery plans and her future goals to arrive at an action plan to help her.

“We focused on Nicole’s overall fitness to help with her upcoming triathlon,” said Brent Arnholter, the General Manager of the Gold’s Gym in Annandale. “We included bootcamp workouts which help her strength and agility.”

Gold’s Gym trainers are certified through the National Academy of Sports Medicine and regularly deal with special populations and people of all fitness goals to help them work around surgeries and come up with alternate exercises.

“Nicole is truly one of a kind; she is one of the few people I've seen that has so much heart and persistence. Once she has a goal, she goes after it,” said Arnholter. “Having two hip surgeries and making no excuses, she came into the gym three to five times a week and worked her butt off weightlifting and running.”

“I also was getting a lot of help from other Gold’s members,” noted Doering. “People were so kind when they saw me in the brace I had to wear. I may not have always have known their names but they were like a family to me. It’s a good group of people there.

“I still have a lot of support from other members at Gold’s. There are about five of us ladies who all run together on the treadmill on Sundays. We all get treadmills next to each other and run, talk and laugh. It makes the miles fly by! Running with those ladies was a huge motivator for me to get back after my surgery and something I look forward to every Sunday,” Doering said.

She intends to remain active with fitness and knows her doctor will refrain from advising her to slow down.

“Some surgeons are more athlete-friendly,” she said. “The only other option is not to exercise so much, which would mean gaining weight, possible hypertension and other health problems.”

THESE DAYS, Doering continues with racing. She also remains involved with horseback riding, including competitive dressage.

With her mare, Doering gets a break from impact on her hips. That doesn’t mean, however, that hip action isn’t a significant part of horseback riding.

“The hips must follow the biomechanics of the horse. They swing with the horse’s particular gait. The hips must be open in order to not impede the way the horse moves,” explained Donna Gatchell, an instructor certified by the U.S. Dressage Federation and Doering’s coach.

According to Gatchell, “The rider must be relaxed and free of pain in order to open her hip angle.”

Tight hips not only cause the rider pain but also result in a rider not effectively moving with the horse. The consequence is conflicting signals to the animal, such that the horse’s responsiveness is not as strong as it could be, the coach pointed out.

But, despite the severity of her condition and due to her dedication, Doering’s hip issues did not encumber her efforts with her mare.

“During recovery, the hardest thing with equine events is getting on and off the horse due to the rotation of the hip. I found that out the hard way,” she laughed.