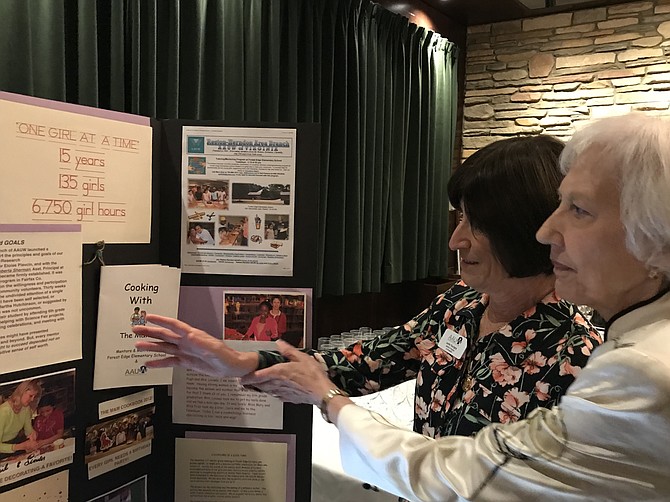 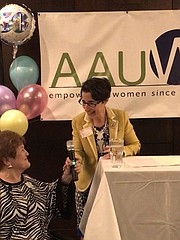 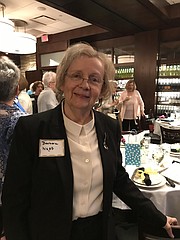 Barbara Naef attends the 50th Anniversary Celebration for AAUW Reston-Herndon Area held Sunday, April 28, 2019. Naef was one of the five women who came together in 1968 to form the local AAUW chapter.

Members past and present of the America Association of University Women (AAUW) Reston-Herndon Area Branch came together at the Wildfire Restaurant in Tysons Sunday, April 28 to recognize the branch's 50th Anniversary Celebration. Founded in 1969, the Reston-Herndon Branch is an Affiliate of the much larger and much older AAUW that has empowered women since 1881 as a national grassroots organization. AAUW works to advance equity for women and girls through advocacy, education, philanthropy and research.

Guests and members mingled before the luncheon and remarks by speaker, Sen. Jennifer Boysko, (D-33). They reminisced over the history and early years, "the beginning," of the Reston-Herndon Area chapter.

"I'm one of five women who met in October of '68 to see about forming a chapter," said Barbara Naef of Reston. "Many initial members were stay-at-home moms looking for an intellectual connection. You have to look at the context of the time. It was the late 60s, a different time for Reston, people were moving in. We were very interested in education and did programs to attract people and book sales to raise funds."

AAUW of Virginia Co-President Leslie Tourigny, member of the Alexandria and Virginia Beach branches spoke about mutual interests between all members of AAUW regardless of a chapter's location. "What brings us together is our common mission and focus, equality for women, that there is a level playing field. We have a focus on diversity and inclusion for all," said Tourigny.

Many women in the room like Marilyn Silvey of Reston said how as chapter members they took activism seriously. "We lobbied for civil rights, education, Title IX which is equal expenditures for female students in secondary schools and universities, and economic equity, closing the pay gap. We have been lobbying 40 years for the same issues," Silvey said referencing AAUW's Public Policies Priorities. Four decades ago, AAUW took a key step, which continues to be a significant vehicle impacting Congressional legislation concerning women rights. AAUW registered as a federal lobbyist, AAUW Capitol Hill Lobby Corps. Virginia AAUW branch members make up the majority of its members, according to AAUW of Virginia.

At present, the Reston-Herndon Area branch's seven Lobby Corp members are the largest contingent from local branches. One of the corps first successes was a bill to provide divorced women with legal access to a portion of their former spouse's pensions; another was the passage of the Violence Against Women Reauthorization Act in 2013 according to AAUW Reston-Herndon branch documents.

Mary Zane of Oak Hill is the AAUW Reston-Herndon Public Policy Co-Chair with a particular interest in Lobby Corps. "We go every Thursday when Congress is in session and advocate for bills which elevate the status of women and will eventually close the pay gap. We also oppose legislation that is in opposition to our goals and mission," Zane said. As a registered federal lobbyist, Lobby Corps is the voice for AAUW members. It is telling Congress to ratify the Equal Right Amendment (ERA) now according to AAUW website.

"We continue to advocate with coalition partners for the passage of the Equal Right Amendment," said AAUW Reston-Herndon member, Stephanie Abbott. According to AAUW: "The ERA was first introduced in Congress in 1923, and was ratified by 35 of the necessary 38 states by 1977. However, Congress imposed a deadline to complete ratification by 1982… Congress must do its part to make women's constitutional equality a reality."

Dianne Mero shared a special recognition on the 50th Anniversary of the AAUW Reston-Herndon Branch by AAUW National, a Certificate of Honor. "We applaud your exceptional service and demonstrated commitment to advancing equity for women and girls," Mero read during the luncheon.

MARION STILLSON introduced speaker, Sen. Boysko. "She works for equal pay for equal work and thanks AAUW in particular for the drafting of legislation, research and testimony as support of the bills during committee hearings," said Stillson.

Boysko said AAUW worked on the issues that were most important to her, economic equality for everyone and empowerment of girls and women so they could be successful in life. "AAUW provides training, so women know how to speak up," she said. "Your voice matters. The things AAUW do matter. Fifty years educating people and letting them know. It's you who shows up… There is too much at stake."

For information on AAUW national visit, aauw.org. For details on the Reston-Herndon Area Branch, visit restonherndon-va.aauw.net.