Cappies Review: Transporting Audience to Chicago of 1920s in Lorton 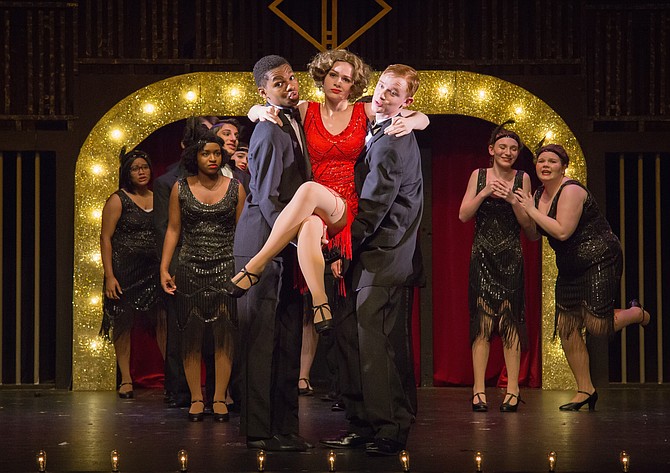 A man cheating with his wife's sister, a jealous boyfriend, an innocent woman, a man who thinks single means having six wives, incessant popping of gum, and a lost soul who found himself in the arms of other women — find out what makes a person snap in South County High School's production of “Chicago” (High School Edition).

“Chicago” is set in the 1920s, telling the tale of two female murderesses, Velma and Roxie, who attempt to use the coverage from the press to persuade the jury that they're not guilty. Maurine Dallas Watkins, a reporter from the 1920s, wrote the play “Chicago” based off of the popular trials of two female murderers. Then, John Kander, Fred Ebb, and Bob Fosse turned it into the “Chicago” that became the longest-running American musical on Broadway.

South County High School's production of “Chicago” was anchored by their striking choreography. Hannah Chester, Shaylen Estrella, Emily Mann, and Michelle Wyss rose to the challenge of coming up with choreography that would still be true to the nature of Chicago while still keeping it appropriate for a high school performance. "Cell Block Tango" emphasized the individuality of each of the Merry Murderesses with eye-catching poses and purposeful movements such as having some of the murderesses pretend to fire a shot in time with the pit's music.

Hannah Chester added many nuances to her portrayal of Velma Kelly, providing her own flair. She was a fantastic dancer, using her flexibility to her strength and even doing the splits. Her vocals were on point and especially captivating in "And All That Jazz." Kevon Thompson gave Billy Flynn a modern twist with his movements and had an excellent stage presence. He shined in his songs including "We Both Reached for the Gun," in which he behaved as a ventriloquist controlling Roxie.

Emily Mann did a wonderful job of portraying the sweet and charismatic Roxie Hart. Her dancing was terrific during "We Both Reached for the Gun," acting as Billy Flynn's dummy by slumping over and gesturing like a puppet. Her husband, Amos Hart, was played by Ian Pathak who captured the audience's hearts and astonished them with his clear and crisp singing during "Mister Cellophane."

The Publicity and Marketing team (Mincy Barbosa, Hannah Swim, Kayla Stephens, and Gus Cobba) came up with an extensive plan to publicize the show including organizing a photo shoot. They used these photos to create posters and fliers for the school's display case. Additionally, they used social media to their advantage, creating various promotional videos and having certain actors do Instagram takeovers of the department's account.

Although they ran into some issues with copyright, since they weren't allowed to use a red and black color scheme in their show posters, they quickly and calmly resolved it by editing it to be gold instead and then replaced all the physical and digital copies.

The set (created by Armin Mahmutovic, Mikayla Park, Mary Ziegler, and Justin Turner) had a special pizzaz, featuring an arch of golden light that they created with duct tape and glitter placed over light bulbs. There were also many intricate aspects including iron detailing on the railings of the staircases leading up to a section above the arch as well as a gold and black pattern painted on the stairs.