Not So Quiet Along the Potomac
Votes

Not So Quiet Along the Potomac 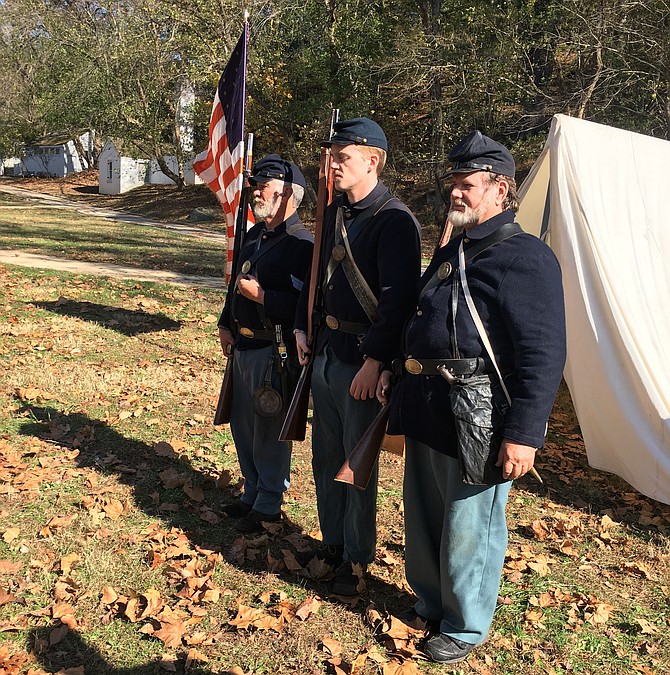 Tom Youhn, left, explains the role of the 20th Maine Regiment along the C&O Canal during the Civil War. He explained the importance of keeping the waterway in the hands of the northern states as it was used to carry supplies to armies stationed along the canal from Washington City to Cumberland, Maryland. Civil War reenactors from the 20th Maine Regiment held a Civil War Encampment at Great Falls Tavern Visitors Center on Nov. 2 and 3. Photo by Peggy McEwan 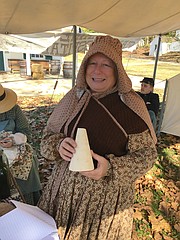 Sue Youhn, part of the Civil War Encampment at Great Falls last weekend, shows visitors a cone of sugar. Women were auxiliary to the 20th Maine Regiment in providing medicines and supplementary food to the troops.

This was the time that saw the growth of the Union army as it first moved to protect the capital city and then began to secure the border, set up camps of instruction, and in other ways protect the Canal (and the railroad) from Confederate regulars and partisan raiders. This is the story of thousands of young citizens marching off to war for the first time in their lives. Boys and young men never outside of Boston or Philadelphia, farm lads never outside their county. Nearly all away from their families for the first time.

Thrown into the field along the Potomac frontier in Montgomery and Frederick counties, Union commanders quickly set up camps of instruction and drill to ready their troops for the bigger conflict that was sure to come. The officers were literally one step ahead of those they led often reviewing the manual of arms in the morning and instructing the same in the afternoon. It was literally, the birth of an army.

Nothing quite equaled the sense of emergency and the sheer numbers of troops as did that first year of the war. After the spring of 1862, the seat of war in the East shifted to the south – to the Peninsula campaign, Seven Days, Cedar Mountain, Second Manassas. Most of the regiments who spent the summer and fall of 1861 along the Potomac would abandon their camps and take to the front lines. By spring of 1862, the war had taken on a new dynamic as armies on both sides turned from inexperienced civilians to battle wearied veterans. The Potomac of their early days a mere memory.

Discover the history of the Civil War coming to the Potomac River and the C&O Canal, presented by VIP Jim Buchanan. This presentation will cover the period from April 1861 through April 1862.