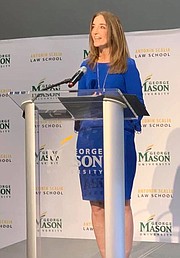 Speaker-designee, Del. Eileen Filler-Corn (D-41) is the first woman to ever serve as Speaker of the House of Delegates in the 400 years of its history.

The Nov. 5 elections in Virginia produced results of historic proportions. The House of Delegates that has had a Republican majority since 2000 was flipped to a blue Democratic majority of 55 Democrats to 45 Republicans. As recently as the election for 2014-2016, Democrats in the House had dropped to 32 members. The turn-around came decisively in amazing political time; there will be a recount in only one seat the Democrats won. The Senate that had a Republican majority before the election flipped to blue with 21 of the 40 Senate seats now being held by Democrats.

There were other historic changes in the oldest continuous legislative body in the western world celebrating its 400th anniversary this year. A Muslim woman will join the Senate as the first ever elected to that body. The number of African Americans in the General Assembly will increase to the highest number since Reconstruction. The first ever Indian American man was elected to the House of Delegates.

The new members of the legislature have already indicated their willingness to make history. The Democratic caucus of the House met this past weekend and chose as its Speaker-designee, Delegate Eileen Filler-Corn, the first woman to ever serve as Speaker of the House of Delegates in the 400 years of its history. She will be elected formally by the entire House when the General Assembly convenes in January. Adding to this historic moment, she will assume the leadership position, considered the most powerful in Virginia government next to the governor, with the least seniority of anyone ever taking the position in the modern day. She will be the first Jewish Speaker serving along with the Senate majority leader who is also Jewish. While I had hoped to become Speaker myself, I fully support Eileen who is amazingly smart and talented and I will do everything I can to ensure her success.

The electorate broke through many hurdles in its votes this election year. Some results called historic today will become commonplace in the future as the General Assembly reflects more the demographics of the state as a whole. I have always felt honored to serve, and with the historic results of this election year I feel even more honored. Thank you, voters!