Change in the Virginia Landscape
Votes

Change in the Virginia Landscape 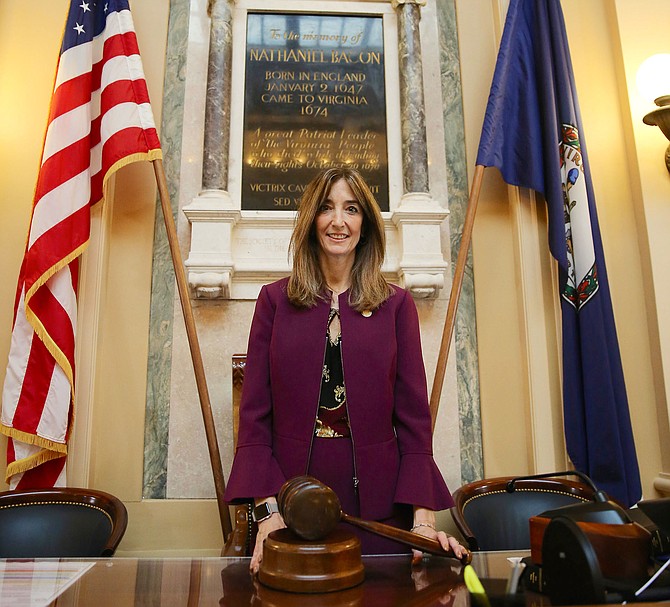 Lawmakers elected Eileen Filler-Corn as the 56th Speaker of the Virginia House of Delegates and the first woman to hold the role in the 401-year history of the body. "We were the country's first legislature, and I strongly believe that Virginia can lead—by showing the country the rewards that collaboration can bring," Speaker Eileen Filler-Corn said in her address. Photo contributed

When the Virginia General Assembly reconvened for the 60-day 2020 Session, the week opened with a series of firsts. The first time since 1993, Democrats took the reins with a trifecta: In the 2019 election, they garnered decisive majorities in the House of Delegates and state Senate, with a Democratic governor..

Women rose to power in numbers and leadership positions. Gov. Ralph Northam announced the new "Virginia 2020 Plan", and with it said, “The landscape has changed.”

For the first time in a long time, Republicans could not stop the Democrats from advancing landmark legislation such as the Equal Rights Amendment, gun policies and climate control measures. Democratic legislators, many from the Fairfax County delegation, filed bills and resolutions, rallying in support of the 2020 Plan.

Incoming Senate Majority Leader Saslaw (D-35) said they were going to be sure that Virginia became a better place to work and do business.

Inside, shortly after 1 p.m., applause welcomed Del. Filler-Corn as she entered the House floor before being sworn in as House Speaker by Virginia Supreme Court Chief Justice Donald W. Lemons. House Speaker Filler-Corn became the first woman and first Jewish person to hold the office.

"This session brings many firsts. We will have the first women of color to lead committees and have a historically diverse group of committee chairs and vice-chairs. And these leaders are Members of the most diverse House of Delegates in Virginia history. This House is not only diverse in terms of race or gender. The Members of this House represent a wide range of experience, thought, orientation, religion and backgrounds… The people demanded we act on many areas where Virginia has lagged behind. This House will pass the Equal Rights Amendment. And we will address discrimination in our laws. We will take common sense measures to prevent gun violence and keep Virginians safe. And, we will address the threat that climate change poses to our entire Commonwealth, especially our coastal communities.”

Del. David Bulova (D-37), later said, " I couldn’t be more proud of my colleague Eileen Filler-Corn, who my wife and I have called friend for more than 20 years."

That evening, Gov. Northam, 73rd Governor of Virginia, delivered the annual State of the Commonwealth address. He highlighted accomplishments and shared his vision to continue building a "stronger, fairer, and more equitable Virginia." he said.

Afterward, Sen. Dick Saslaw (D-35) tweeted, "This evening, @GovernorVA delivered a resounding message that the state of our Commonwealth is strong! VA is a better place to live and work for so many people. I look forward to the progress the Senate can deliver working with Gov. Northam over the coming months."

Friday, Jan. 10: By early morning, the Virginia Legislative Information System posted 2,574 bills and resolutions filed by delegates and senators for the 2020 Session.