Military Life was Highlighted at a School in Mount Vernon
Votes

Military Life was Highlighted at a School in Mount Vernon 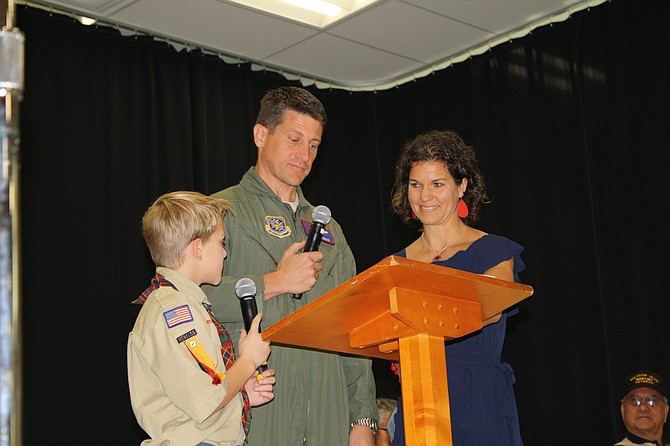 Students made symbols for each branch of the service.

presence in this Mount Vernon community.

They all filed in the school cafeteria for the celebration, created by students, parents and PTA members, featuring videos, interviews and music to honor the veterans on their special day. Being in the military means moving around the country and even the world on a regular basis, presenting the students with a challenge as they enter and exit different schools throughout their childhood. Sometimes a parent is gone for a deployment, military talk for a short-term transfer, and this is another challenge for the students.

“We have such a representation of all branches of service here, this makes the kids appreciate the military more, I certainly appreciate it,” said Jennifer Knapp, an event organizer and also the mother to Ben, 11, and Tyler, 9. Knapp grew up in a military household as well and moved around a few times. There were a few examples of this throughout the event, including one father, Silas Simone, who addressed the audience while holding one young daughter, and two others joined him on stage. Their mother was deployed, so he took care of all three. “My wife is deployed right now, but being deployed is a necessity,” he said.

To kick off the ceremony, scouts from Troop 1504, Den Five presented the colors, which was “a little unnerving,” said color guard member Will Lincoski, 10. They had to learn the ways to handle the flag according to the rules, which included not letting it touch the ground. “So we don’t have to retire it,” added Owen Thomas, 10.

Then came the videos, which were produced by students and teachers. Sixth grader Nicholas Ciovacco helped make it, and went around asking students “what it’s like to be a veteran kid,” he said.

The students listened to each speaker's military family experience.

Then there were a few interviews on stage, including the first one where Ben Knapp interviewed his grandfather Brem Morrison, a retired Air Force pilot that flew in the Vietnam War. Morrison joined the Air Force back in the 1960s to avoid being drafted as a ground troop, but ended up in Vietnam anyway. He valued the experience and had one bit of advice for the students: “Be the best you can be,” he said.

The Thomas family got up next, with Owen Thomas interviewing his father Mark Thomas who was also a pilot. Miss Thomas, Owen’s mother, got up there with them but she was also a teacher at the school, so she was referred to as “Miss Thomas,” the way students do.

Mark Thomas now flies Vice President Pence and other high level military officers out of Washington, D.C. “We take people where they need to go when they need to go, “ he said.

At one point, all the students that had relatives in the military were asked to raise their hands, and a majority of the hands went up. Maria Gustafson, the Military Kid Liaison for the PTA estimated that there were 200 children at Waynewood that were in military families.

Hollin Hall Automotive was thanked for sponsoring the event, and afterwards the parents were invited to a reception and the students posted their smaller flags in the front lawn at the school.