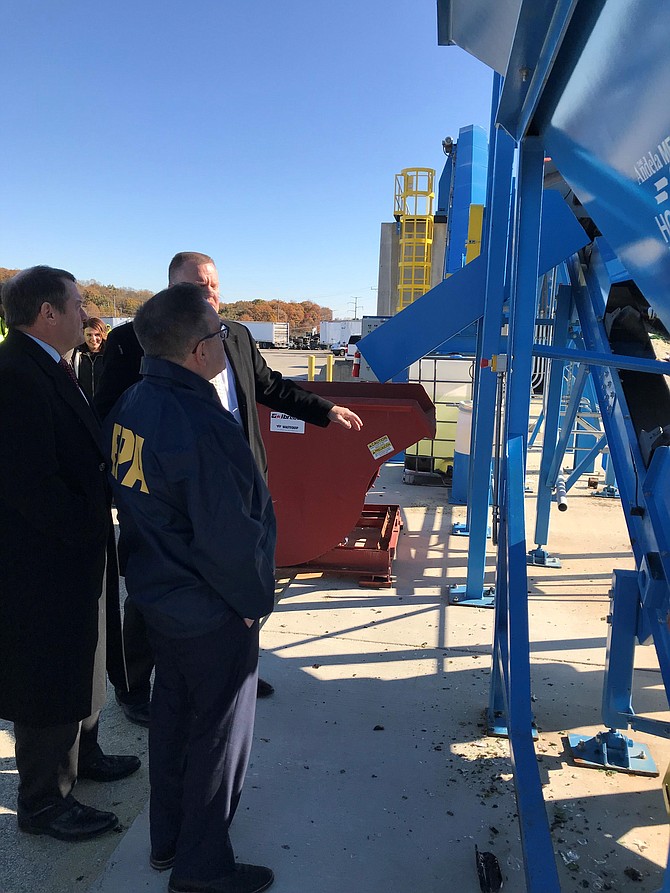 A recycling machine in Lorton.

In an effort to push his recycling agenda further along, Supervisor Pat Herrity accompanied EPA Administrator Andrew Wheeler on Wednesday, 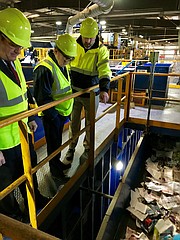 Trash is sorted out at the recycling center.

Nov. 13 to the Lorton Recycling Center as part of “America Recycles Week.”

They started at the American Disposal Services Recycling Center in Manassas, where Administrator Wheeler and Supervisor Herrity viewed the recycling processing plant where glass, aluminum, paper, steel, and cardboard is separated before being broken down and reused. Then they moved on to the Fairfax County Department of Public Works and Environmental Services I-95 Complex in Lorton where they saw a glass processing demonstration, which showed how the facility processes crushed glass for reuse in various county projects, including the road to the I-95 landfill. According to the county, two material blends are being tested: a 40/60 mix of ash and crushed glass, and a 25/75 mix of ash and recycled concrete. Approximately 400-500 tons of recycled material are being used to fill 2,000 square yards of roadway, the county website stated. Crushed glass is also being used in the recent past as pipe bedding at Flatlick Branch in the Sully area near Chantilly.

Herrity saw the visit as a positive for the county recycling effort. “Thank you to the EPA Administrator Andrew Wheeler for visiting Fairfax County to learn and see firsthand what we’re doing in the area of recycling, especially with our new glass recycling program, and to share with us some of the recycling trends both nationally and internationally. I’m proud of the enthusiasm our residents have for recycling and the success of our Department of Public Works recycling initiatives,” he said.

In Fairfax County, glass cannot be recycled through the normal channels, i.e. the recycling bin that is left at the curb during the week. Glass must be taken to the purple trash dumpsters at the county supervisors’ offices, which requires the user to make a special effort.

Over the last few weeks, the purple dumpsters have worked and they’ve collected two million pounds of glass that would have ended up in a landfill, Herrity said. There are now 25 purple dumpsters around the county. “The new glass recycling program has been tremendously successful,” he said.

At October’s Board of Supervisors meeting, Herrity and Supervisor Penny Gross (D-Mason) proposed to the board that Nov. 15 be Fairfax County Recycles Day, and it was adopted by the board. On that day, they will build on the EPA momentum to further highlight the benefits of recycling and improve recycling behaviors of the citizens of Fairfax County.