A Full Glass Recycling Dumpster is a Sign of Success
Votes

A Full Glass Recycling Dumpster is a Sign of Success

Purple dumpsters are pulling in big numbers around the county and a few spots outside. 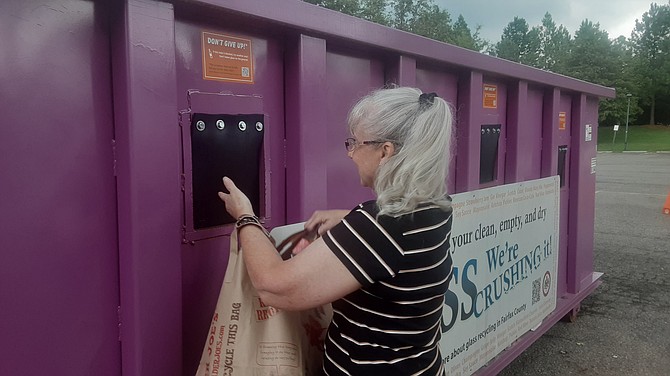 This chart shows the amount of glass taken in at each location,

glass. People were recycling their glass, with a little finesse, they still managed to fit the glass in.

“I love it, glad they do it,” said Enna, a Springfield resident. “It’s definitely working,” she said.

Another woman from Kings Park West managed to throw her bottles in too. “I live in a cul-de-sac and collect for three houses, this is a wonderful service,” she said.

Bottles and glass aren’t accepted with the curbside recycling in Fairfax County anymore, so the purple dumpsters located on county property are the option.

In fact, "the program is doing well, and we’re pleased with the numbers," said Sharon North, at the Fairfax County Department of Public Works and Environmental Services. North had a chart that showed over 13 tons of glass had been recycled since the program started in April 2019. Fairfax County was responsible for over seven tons of that, and the rest was in other area jurisdictions like the City of Alexandria, Arlington County and Fredericksburg to name a few.

It all started on Oct. 1, 2019 when the county stopped accepting bottles and jars in curbside recycling bins, and gave consumers the choice of throwing the used glass in the trash with other trash, or going to the purple dumpsters. There were 21 dumpsters at first, and they are evaluating other sites for more.

Supervisor Pat Herrity (R-Springfield) backed the program since it started a few years ago, and found support from nearby residents. “It’s wildly successful,” he said.

The overflow in Springfield shows the program's popularity. “People really embraced glass recycling,” Herrity said, but did note that it requires a

drive to the dumpster and to physically put the bottles in the chutes. The drive is “the biggest complaint,” he said but some streets have one person that voluntarily makes the drive, like the woman from Kings Park West. The Springfield dumpster is behind the police station on Rolling Road, and the Lee District dumpster is located out front of the Franconia Government Building.