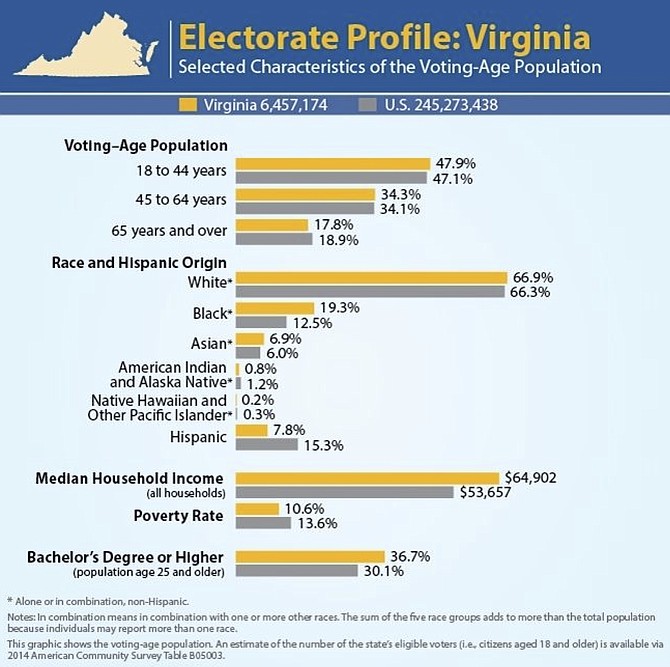 Millennials and Gen Xers now outnumber Baby Boomers and older voters in Virginia, according to data from the Census Bureau. But that doesn’t mean they have as much influence. Census numbers also show another trend: People over the age of 45 vote at much higher rates. That means Baby Boomers are expected to once again exert outsized influence in next week’s election despite the fact that they are now outnumbered by ranks of younger voters.

“We talk about the Baby Boomers so much because they were a phenomenon unto themselves in some ways,” says Quentin Kidd, director of the Wason Center for Public Policy at Christopher Newport University. "As they aged, they participated at high levels, and those participation levels stayed pretty high.”

Voters across Virginia will be heading to the polls next week in a high-stakes election that will determine which party controls the House of Delegates and state Senate. All 140 seats in the House and Senate will be on the ballot this year. Election officials expect turnout to be about 30 percent, much lower than the 60 percent of registered voters that show up to presidential elections. That means voters who show up to the polls will be older, whiter and much more likely to be Republican.

“Virginia has a lot of immigrants. Immigrants tend to be younger and tend to have more kids, and those voters with that profile tend to lean Democratic,” says Jeremy Mayer, associate professor in the Schar School of Policy and Government at George Mason University. "So why are the Baby Boomers still dominating? Because that demographic votes, and tends to vote with extraordinary reliability.”

Mayer says he sees a similarity between the victory of Donald Trump in 2016 with a victory of Brexit that same year, two elections where the interest of older voters overwhelmed the interest of younger voters, a phenomenon he calls a “revolution of the elderly.” This election is also expected to be dominated by Baby Boom voters, although eventually millennials and Gen X voters will catch up and become the dominant force in Virginia politics.

“Of the new registered voters in Virginia for this election, a large element are indeed the 18 to 29 year olds,” says Bob Denton, chairman of the Department of Communications at Virginia Tech. “There is going to be a political sea change, not so much on demographics per se but on political beliefs, attitudes and values of the Millennials and Generation Z.”

Four years ago, when Virginia had no statewide races and every member of the General Assembly was up for election, about 30 percent of registered voters showed up to the polls and cast a ballot. Turnout statistics were pretty much the same for the election four years before that as well as the election four years before that. Democrats are expected to do well if they can push the turnout numbers above 30 percent, even if it’s only a little bit.

“The early voting numbers suggest a significantly higher trajectory,” says Stephen Farnsworth, director of the Center for Leadership and Media Studies at the University of Mary Washington. “Based on the number of candidates running in the Virginia mid-term this year as well as polls, including the Mary Washington statewide survey that shows a high level of voter interest in 2019, all indications are that this Virginia midterm will have much higher turnout than four years ago.”