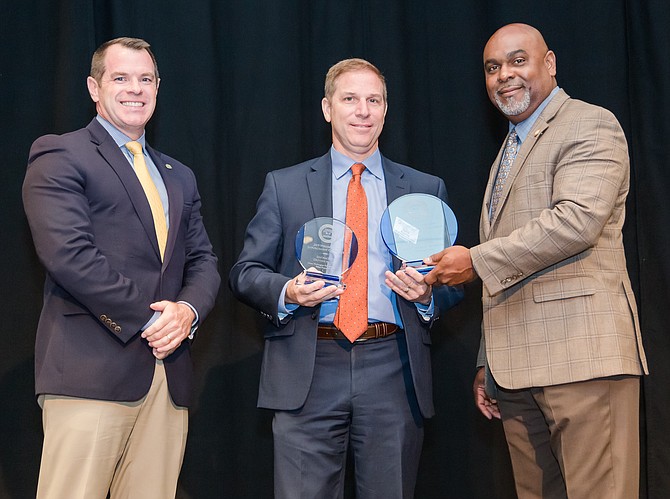 Sgt. Steve Brown, Sgt. Brian Hamilton, Sgt. Sean Merritt and Cpl. Robert Ronk of the Herndon Police Department accept three awards on behalf of the department: the Impaired Driving Award, the 2019 Commonwealth Award for the most outstanding traffic safety program in Virginia in 2018, and 1st Place in the 2019 Virginia Law Enforcement Challenge for municipalities with 26-60 Officers.

AWARDS were based on entries prepared by the participating agencies, which highlighted their traffic safety education and enforcement activities in occupant protection, impaired driving and speed over the past calendar year, according to VACP. Judges gave points to the agencies in six areas — problem identification, policies, planning, training of officers, public information and education, enforcement, and an evaluation of the outcomes of the agency's efforts.

The Herndon Police Department issued the statement: "We were both incredibly honored and surprised this year to receive three awards in the Virginia Chiefs of Police Law Enforcement Challenge for traffic safety enforcement and education. We were notified in advance that we were awarded first place in our agency size category, but we had no idea HPD would receive the Commonwealth Award for the most outstanding traffic division statewide, regardless of size and also be recognized for our efforts in combating impaired driving. We could not be more proud of the efforts put forth by our officers who work very hard each day to keep our roadways and our citizens safe. Traffic and pedestrian safety will continue to be a focus for HPD as development and roadway improvements increase both in the Town of Herndon and around it."

The Virginia Law Enforcement Challenge Awards program is supported by a grant from the Virginia Highway Safety Office. The Virginia Association of Chiefs of Police & Foundation is a statewide organization of federal, state and local police chiefs and law enforcement executives dedicated to improving the professionalism of police agencies in Virginia. The Association was founded in 1926 and has more than 600 members.