Skills of a Clown
Votes

Skills of a Clown

Taking Clown Class at the Workhouse unleashes the inner five-year-old. 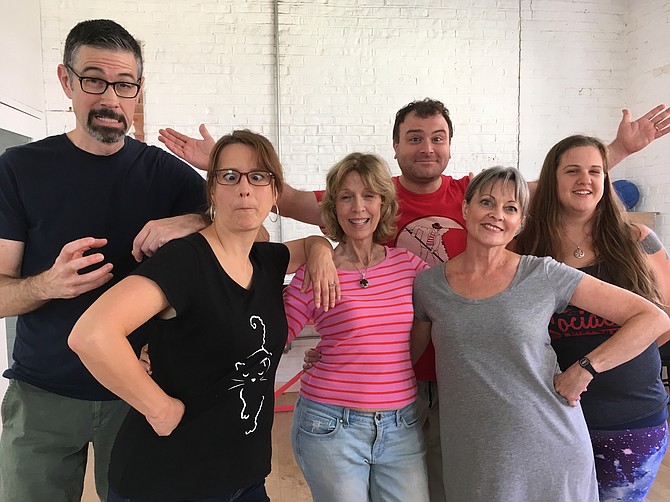 The Mirth and Mayhem class consisted of Watt Hamlett and Julie Price from Reston, Joyce Bradford, Laura Marcell, Rachel Kimbo from Nashville, Tenn. and in back, Mike Funt. Photo by Mike Salmon.

On the first day of Clown School at the Workhouse Arts Center, Mike Funt was teaching the students “pantomime,” a practice where students were

Mike Funt, a clown and instructor at the Workhouse in Lorton.

catching imaginary fleas and training the fleas to do the loop de loop, before accidentally smashing one between the hands in a round of applause. This was right after the class wandered around the room catching specks and putting the good ones in an imaginary pocket. Welcome to the life of a clown.

Imaginary is the key word here because imagination is a big part of being a clown, and keeping the audience involved and laughing is one of the skills that Funt was teaching.

This was a two-day class called “Mirth and Mayhem,” and Funt went down a list of the building blocks of clowning, which included pantomime, the touch drill, imitating birds and focusing on the three emotions that are important to clowns – happy, sad and fear. During the first half of day one at the Workhouse, there was someone practicing the violin in another room, adding a sound track to the event, and Funt appreciated that.

The Clown School debuted at the Workhouse this summer, and even if a future of being a clown is not in the cards, the training is fun, good for 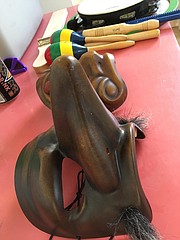 Masks from clowns of long ago.

presentation skills, and is all in an upbeat atmosphere that comes with being a clown. Funt has been a clown for 22 years, and has studied the greats, so he knows the skills, and puts them in his exercises. He does the Charlie Chaplin walk, which is a staple in clowning, and uses the over exaggerated facial expressions that he hopes the students walk away with.

The Mirth and Mayhem class on the weekend of Aug. 24-25 had a handful of students, including one artist from the Workhouse that took it on a whim, and she wasn’t sorry. Everyone has an inner clown, which is really your 5-year-old self, Funt said, and the class lets it come out. Clowns don’t fail when they do routines, you just have to shift it around a bit to get the audience involved. For example, if your whoopy cushion prop won’t blow up that’s a sketch – the clown with an uncooperative whoopy cushion. Over exaggerating is the name of the game.

Day two started out with a ball game to introduce juggling skills, and going between reciting the alphabet and singing “Row, Row, Row Your Boat,” while walking in a circle. This gets out the morning cobwebs so the clown can operate in a heightened emotional state.

Working with a partner was next and the students paired off for a couple of exercises where they played off each other’s movements.

There was no face painting, rubber noses or oversized shoes, but Funt talked about all those elements that could or could not be used, depending on the situation.

In the end, I learned some basic clown skills and a little about what it takes to go before an audience dressed in a clown suit. Who knows, sometime in the future, I might fill in at an event when the hired clown doesn’t show up.