A Burning Barn was Part of Hayfield Farm’s Past
Votes

A Burning Barn was Part of Hayfield Farm’s Past 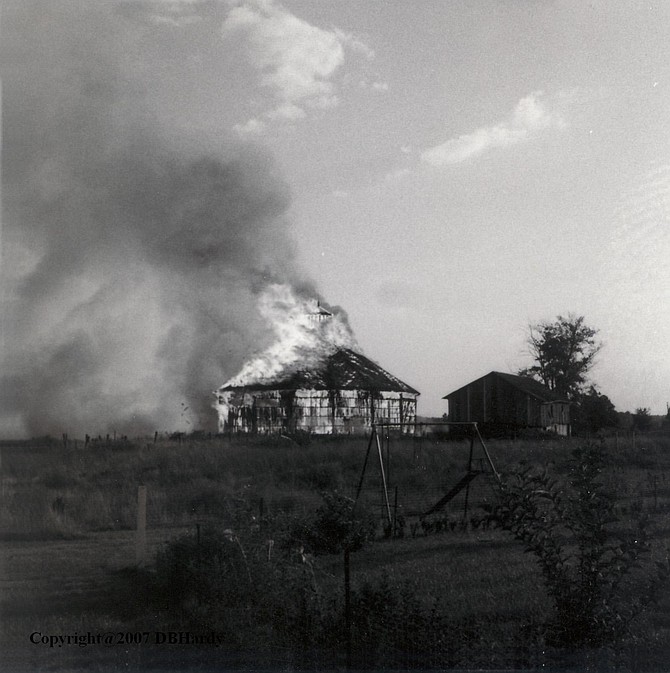 The Hayfield Barn burned in 1967. Photo contributed by the Hardy family.

Heading north from Mount Air, past several gated entrances to Fort Belvoir, is Hayfield Farm, a development that was built in the 1960s in an area 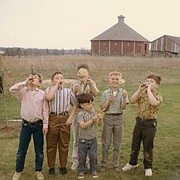 Photo contributed by the Hardy family.

At the birthday party of David Hardy, a former Hayfield resident, the barn can be seen in the background. This picture was taken in the 1966-1967 timeframe before the barn fire in September 1967.

that was considered country at that time. Now there is the community of Hayfield Farm, as well as a shopping center, elementary and high school, and a connecting townhouse community up the hill called Hayfield View.

In 1761, George Washington bought the land to grow hay on for his livestock, which was how it first got the name Hayfield. After the Revolutionary War, Washington sold the land and mansion to his cousin Lund Washington in 1785 for managing the Mount Vernon plantation and mansion at Mount Vernon while he was away in the war.

Lund Washington and Elizabeth Foote lived in the manor until her death in 1812, and was buried in a boxwood garden area, according to an old Hayfield Citizens Association newsletter. Her remains were later transported to the Pohick Cemetery at Pohick Church in Lorton.

Hayfield Manor before it burned down in 1916.

The land was used for raising cattle in the 1950s until it was purchased by Wills and Van Metre in 1963, and the first house was built in 1965. When the community was built, there was a 16-sided barn on the property, and local lore had the barn belonging to George Washington himself. In reality, the barn was built in 1893 by William Clark, who modeled it after another barn that Washington did build on the Mount Vernon plantation a few miles away. There was a manor house on the Hayfield land near the current park, that was built by Washington himself, but it burned down in 1916.

County officials were considering using the barn for a theater, until Sept. 22, 1967, when the barn was destroyed in a fire. One of the children that lived in the newly built community of Hayfield was playing with matches that started the fire. There were legal wranglings in the aftermath, just before the statute of limitations expired.

The 16-sided barn was 100 feet in diameter and 100 feet high. The middle ceiling was supported by a spiral staircase that led to the cupola. There was talk of turning the barn into a theater of sorts by the county, but those plans were dashed after the fire.

At one time, Hayfield Secondary School was one of the largest schools around, and the gym was used for many activities besides basketball games and school graduations. In the 1970s the Baltimore-Washington Cats roller derby team had a match there, the Harlem Globetrotters put on a show, and after the Washington Redskins played in their first Super Bowl in 1972, the players were part of a presentation in the gym.

Hayfield Farm has a flood plain that backed up to the woods of Fort Belvoir, and during the Vietnam War, soldiers trained in those woods and the gun shots and explosions could be heard by the residents of Hayfield.

North of Hayfield on Telegraph Road is a Coast Guard station that’s been at that location since 1941. It was originally a radio transmitting station that moved over from a location in Fort Hunt, where it had been since 1934. Currently the Coast Guard Honor Guard is stationed at this small station.