A Special Win for Michael Wardian

After running 262.5 miles over the course of two and a half days straight, without sleep, Wardian won the first-ever Quarantine Backyard Ultramarathon. 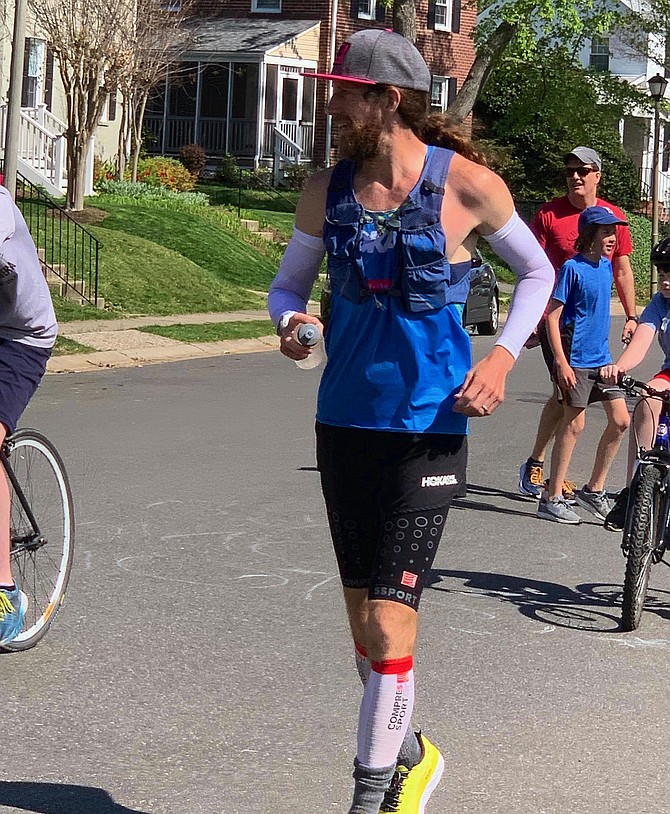 Michael Wardian, 46, running with the kids in his Arlington neighborhood cheering, on his way to winning the first ever Quarantine Backyard Ultramarathon. Photo by Jennifer Wardian 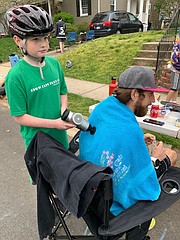 Professional and world record-breaking runner Michael Wardian has run races and stood on podiums all over the globe. In fact, if it weren’t for coronavirus, he would have traveled to Sri Lanka to run a 250 kilometer stage race, and to the Boston Marathon to help a blind athlete, Chaz Davis, qualify for the next Paralympic games in this month alone

Then, in June, he would have been starting his first ever run across the United States.

Instead, this Arlington resident is tackling long-distance challenges in his own neighborhood – literally. On Monday, April 6th, after running 262.5 miles over the course of two and a half days straight and without sleep, Wardian won the first ever Quarantine Backyard Ultramarathon, which officially began the morning of Saturday, April 4.

Announced just two weeks earlier and organized by Personal Peak Endurance, this at-home backyard ultramarathon required all of its participants (connected virtually, of course) to run a 4.16 mile lap every hour, with the last one standing – or running, really – being the winner.

“I’ve gotten to do all these things, I’ve won marathons on all seven continents, and one of the biggest things I’ve ever done and for my career happened 50 feet from my front door,” Wardian said. “While it is great to travel the world and see all these awesome places, it’s also amazing to push yourself and do big things close to home. Sometimes you get caught up and think, ‘I need to be at this place, or that one,’ but, it seems to me like you can accomplish a lot of anywhere you are.”

The Quarantine Backyard Ultramarathon was a byproduct of Coronavirus and calls across the country for quarantine, but it actually turned out to be a significant win for Wardian.

“This was my first time doing the backyard format, and 262.5 miles was the longest distance I’ve ever run,” Wardian said. “I felt great, it was amazing. I felt bad earlier in the race, at about 175 miles [which would have been after more than a day and a half of running], but I started feeling better relatively soon after. I started to think I was going to hit a world record, which would have been 280 miles. But, then I was the last one to complete a lap at 262.5 miles [his 62nd lap]. I would have gotten the record if I’d completed another five laps. Hopefully I can get closer to the 280, 300-mile mark next time.”

By definition, an ultramarathon is a footrace that covers a distance longer than 26.2 miles – the length of a traditional marathon. And with this event, Wardian completed a traditional marathon ten times over. Some of his fellow backyard runners did the 4.167 mile “lap” on treadmills, and some – like Wardian– took to their own neighborhoods for a loop.

No matter how they carved out their courses, all runners were tuned into each other and the race administrators through the teleconferencing application Zoom. It all made for an unprecedented race experience, even for such a seasoned runner as Wardian.

“I’d heard about it two weeks ago after so many race cancellations, and I thought it would be a good challenge and close to home,” Wardian said. “I’ve done a lot of individual projects before, running Fastest Known Times (FKTs) of different routes and trails – for example, I ran the entire [184-mile] C&O Canal by myself in 36 hours, breaking the record for the ‘70s. Still, this was just really different.”

Although Wardian competed alongside nearly 2,300 fellow runners – figuratively speaking – his only connection to them was through the Zoom app on his cell phone that he held for most of the race.

“Tuning in through Zoom was tough,” he said. “Then when it got down to just a few of us left, my wife set up a phone on a tripod so everyone else on Zoom could see what was going on better. We actually even had some traffic cones that became Internet famous.”

Even though he was the ultimate victor, Wardian’s goal going into the Quarantine Backyard Ultramarathon was not actually to win it outright. It was actually to push his own limits and go further than he had ever gone, beyond the 184 miles he ran to achieve the fastest known time on the C&O Canal.

“I wasn’t sure how I’d feel going that far and how my body would hold up,” Wardian said. “I did start to struggle around 175 miles, but the longer the race went on, the stronger I felt. It made me consider my run across the country, which I’ve tentatively rescheduled for October. After the Backyard Ultra, I decided I want to go for the world record when I run across the country, to beat the current time of 42 days and 30 minutes. I have this gift and I have the fitness and desire and I might as well try.”

Even with the world shut down in so many ways, Wardian, who turned 46 earlier this month, has achieved records beyond even most athletically inclined peoples’ wildest imaginations.

“I’m keeping super busy, but just not doing organized events,” he said. “I’ve been trying to set FKTs around the area. I ran all fifty state streets in D.C. in 10 hours and 32 minutes. I tried to set an FKT on the Appalachian Trail, but I am being respectful of all local requirements. I’ve found there’s always a way to readjust and set my own challenges.”

When the world reopens and Wardian is able to look beyond the D.C. metropolitan area, the Quarantine Backyard Ultramarathon will still rank among the victories and records most significant to him.

“It was amazing, because I was with my wife and two boys and friends and the entire neighborhood,” Wardian said. “It was better than being abroad, or on an actual podium, because most of the time, when I get home, it’s done. But when the people I love are actually there when it all happens, it is a different emotion.”

Take it as a quarantine lesson from a world-class athlete: the best moments in life aren’t a result of the world around you functioning, and the conditions of the day, working in your favor.

“We have been lucky in the US, that we are still allowed to go outside,” Wardian said. “This is the perfect opportunity to take on things you’ve always wanted to, an opportunity to start a new chapter.”