Gap Between Relief Funds, Eviction Moratorium Could Cause Mass Evictions in Fairfax County 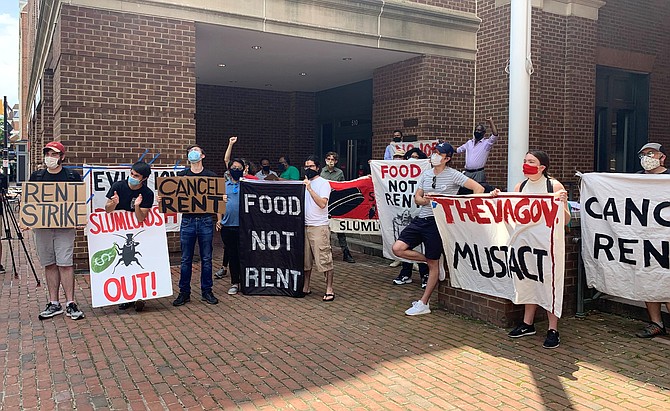 An eviction protest in Alexandria earlier in July. File photo by Janet Barnett

The expiration of the state eviction moratorium and the refusal of the Fairfax District Court to extend it locally past July 10 has sent Fairfax County legal aid attorneys and Health and Human Services Department staff into a flurry of action to try to get federal assistance to the 500 tenants currently on the docket for eviction proceedings. Less than a quarter of households seeking rent assistance from the county have gotten it so far, with most still in processing.

The situation is worse throughout the state. At a press conference July 17, VOICE, a faith-based community action group, said there were 12,000 eviction cases in courts statewide while only 300 tenant households had received federal funds.

Ironically, low-income tenants — those most affected by the pandemic and shutdown — may face eviction while federal Coronavirus Aid, Relief, and Economic Security (CARES) Act funds sit in the bank.

The Fairfax NAACP and the South County Task Force called on Gov. Ralph Northam today to extend the moratorium until CARES rent relief funds can be distributed to tenants. VOICE called for a moratorium through Aug. 31. Other statewide groups have also recommended a new moratorium.

Meanwhile, last week the federal eviction moratorium for landlords with federally backed loans expired (on July 25), as did the extension on unemployment insurance. The federal forbearance program applied to only 30-40 percent of rental properties, according to the National Low Income Housing Coalition. Many housing groups are calling on Congress to provide more rent relief and housing funding as part of the HEROs Act which is before the Senate, because the pandemic and economic slowdown are dragging out much longer than anticipated in the original CARES Act. Virginia Senators Mark Warner and Tim Kaine have co-sponsored some of the housing bills.

A summer eviction tsunami was predicted last April by national housing think tanks and advocates such as the Urban Institute and Enterprise, and the Urban League. The $2 trillion federal CARES Act signed March 27, plus various state eviction moratoria, were designed to shore up out-of-work low and moderate income renters. But funds were slow to get out and eviction moratoria are expiring nationwide before the payments can be distributed.

Fairfax County received CARES funds in early May and designated $20 million for housing stability, utilities, and food support in mid-May. Gov. Northam announced a $50 million CARES rent relief fund on June 25 and asked Circuit Courts to extend eviction moratoria so the state could get the funds out. The state Supreme Court moratorium ended June 28 and circuit courts did not renew it.

The state moratorium did not prevent landlords from sending threatening letters to tenants in the meantime. About 50 percent of renters “self-evict” after receiving such letters from landlords, according to VOICE, because an eviction on their record can prevent them from being able to rent another apartment. Most tenants in eviction court have no legal representation and those without it face nearly 100 percent chance of eviction, whereas those with an attorney face about a 50 percent chance of eviction, according to Northern Virginia legal aid attorneys.

Legislation passed at the 2020 session allows a 60-day postponement of an eviction if the tenant can show proof of being laid off because of the pandemic. But most tenants don’t know about this and don’t have an attorney to tell them. Many very-low-income tenants worked jobs that did not provide documentation of a Covid layoff.

In Fairfax County, Northern Virginia Legal Aid attorney Dipti Pidikiti-Smith and others are going all out to identify clients and connect them with rent relief assistance at the Department of Health and Human Services (HHS). Dean Klein, former head of the Office to Prevent and End Homelessness, heads a task force that includes members from legal aid, HHS, the Department of Housing, the Sheriff’s office and others to alert tenants and landlords to the possibility of paying rent with CARES funds.

To get CARES funds out quickly, the county gave grants to various nonprofits throughout the county with which it has relationships. It designed a system whereby people in need must call the county’s emergency hotline for an intake process after which they are directed to a nonprofit in their area that cuts a check to their landlords or utilities.

However, the hotline was overwhelmed with calls, especially after the number was advertised widely, and callers faced a long wait — over an hour in some cases. As of the end of June, the hotline had received 4,885 calls requesting rent relief alone, up about 300 percent over the previous year, and with over 3,000 first-time callers. Calls spiked the week of July 15, with 5,654 calls (up 600 percent) after the number appeared in the media. But so far, just over 1,000 tenants have received CARES rent relief (of up to 4 months’ rent) according to county staff. It is not clear what is causing the bottleneck, but HHS is bringing in additional intake operators and has promised to give the Board of Supervisors a plan to streamline the hotline system.

Meanwhile, Klein’s task force is trying to help tenants on the brink of eviction. Legal aid is trying to get in touch with landlords to let them know rent relief funds are available through the county and giving them guidance on how to get mortgage forbearance. Earlier the county had sent letters to landlords with information about the moratorium and forthcoming CARES funds, but the follow up was unclear.

“We have a huge battle ahead of us with the moratorium ending,” Klein said. “Some people have not been able to pay rent for three to four months and they usually struggle to pay one month’s rent.”

AT THE END OF MAY, the South County Task Force and 37 other organizations in Northern Virginia — including the Fairfax NAACP, the Equity Agenda Coalition, SIEU, and two teachers unions — plus 14 Fairfax County legislators, sent a letter to Northam asking for an extension of the moratorium through Aug. 31. The Southern Poverty Law Center in Richmond asked for the same.

The South County Task Force letter noted that “In an analysis of eviction moratoria in 50 states, Princeton’s Eviction Lab’s interactive Policy Scorecard rated Virginia’s Supreme Court ordered moratorium only a half-star out of five stars, because it lacked most of the provisions that would alleviate a rent crisis when the moratorium lifts” and that “Governors in 30 states have issued executive orders to halt evictions.”

Northam has insisted that he doesn’t have the authority to order an eviction moratorium, but a July 15 letter from Attorney General Mark Herring in response to a query from several legislators says, “The Governor has both the executive and statutory authority to issue emergency orders…. Whether any particular executive order is an appropriate exercise of emergency power depends on the scope of the executive order and the facts and circumstances.”

The General Assembly starts a special session Aug. 18 that is restricted to dealing with the budget and police reform, but an eviction moratorium might be appropriate if the Governor does not act by then.