Virginia has new protections for renters, but temporary measures expire next year. 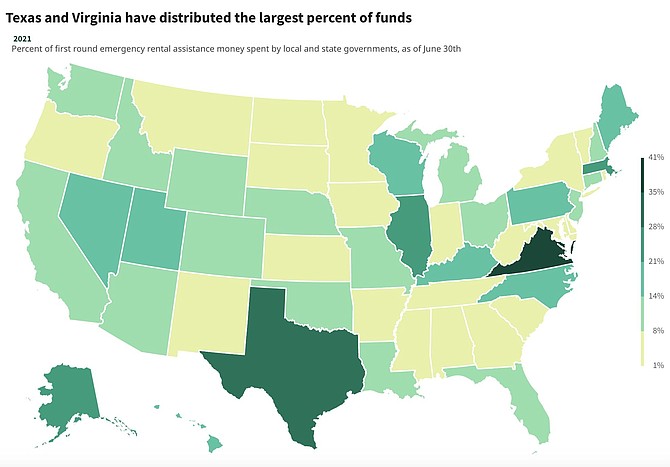 Virginia has spent more than a third of its federal rental assistance funds, a much higher percentage than most states in the race to get the funds to renters who are facing eviction. USAFacts

People of color and low-income people in Virginia are disproportionately more likely to have experienced job and income losses during the pandemic.

The clock is ticking for renters across Virginia who are in danger of being evicted. Now that the federal moratorium on evictions is over, landlords are finally able to start filing paperwork at the courthouse. That means a wave of evictions could be on the horizon for people of color and low-income Virginians who have been disproportionately hit by job and income loss during the pandemic, according to data compiled by the U.S. Census Bureau.

"People are worried," said Jon Liss, executive director at Virginia New Majority. "There's a huge concern about a massive wave of evictions, both nationwide and in Virginia."

Last month, members of the General Assembly approved a new protection for renters who are struggling to make ends meet. Landlords who want to evict tenants for non-payment of rent are now required to apply for federal relief before evicting anyone. That's just one of the many new requirements on landlords, who must wait 45 days to move forward with an eviction if a rent relief application is under consideration. Ultimately, though, those temporary protections will run out June 30, 2022.

"We're concerned that the lifting of the CDC moratorium will embolden landlords to increase their mass eviction filings," said Larisa Zehr, a legal fellow at the Legal Aid Justice Center. "Mass eviction filings are always a problem in Virginia, but that will be an increased problem right now because so many people are still struggling to pay rent because of the pandemic."

THE FEDERAL MORATORIUM on evictions was issued by the Centers for Disease Control and Prevention in September 2020. The United States Supreme Court struck down that moratorium last month, opening the door to landlords across the country evicting people who have not been able to pay the rent. Here in Northern Virginia, low-income people are likely to spend 50 percent of their income on rent. The Department of Housing and Urban Development suggests households spend no more than 30 percent of their income on housing costs, which means many people in Northern Virginia were caught in a trap.

"You took a very vulnerable population that was walking a financial tightrope every month to get the rent paid, and you just pulled out tightrope," said Christie Marra, director of housing advocacy for the Virginia Poverty Law Center. "If these tenants get evicted for not paying their rent, that becomes what I call the Scarlet E."

Marra says don't expect a sudden rush to evict tenants based on violations of leases that have nothing to do with non-payment of rent. Landlords who wanted to get rid of a tenant for damage or drugs have been able to evict those problem tenants all along, which is why Marra bristles at the word "moratorium." The CDCs order applied to people who were unable to pay their rent, not for other reasons. That means the people who are now at-risk of being kicked out of their homes are low-income people struggling to make ends meet during a pandemic.

"There has never been 100 percent protection for tenants," said Marra, noting that Virginia ranks poorly in terms of protections for renters.

LANDLORDS AND TENANTS have been in a state of suspended animation since the pandemic struck. Normal rules of economics no longer applied, and evictions were put on the back burner to help prevent the spread of COVID-19. Many landlords are eager to get rid of renters they view as deadbeats, holding down a property without paying the bill. During the Virginia Senate debate on the new requirement for landlords to seek federal assistance before evicting anyone, state Sen. Chap Petersen (D-34) argued that he didn't want to require too much of property owners.

"If these tenants get evicted for not paying their rent, that becomes what I call the Scarlet E."

"We're changing the terms of the contracts. These people already have written leases," said Petersen, who is often an outlier in the Senate Democratic Caucus. "They have residential leases, and to try to add these additional obstacles, it's not correct."

Here in Alexandria, city officials are planning to invest in a workforce of people known as "navigators" who can work with landlords and tenants to help apply for federal rental relief. Eventually, though, all that federal assistance will dry up. Tenants who have not been able to pay the rent since the pandemic struck will be facing eviction, and then the challenge of finding a new place to live with a paper trail that includes nonpayment of rent.

"I think there's a big backlog of cases, and the first period will probably be a bit rugged," said Stephen Haner, senior fellow at the Thomas Jefferson Institute. "In the long run, I think the changes Virginia has made will make eviction harder two years from now, five years from now, six years from now. And you will see fewer evictions."