Alexander Mather wins the contest to name Mars rover and witnesses the lift off. 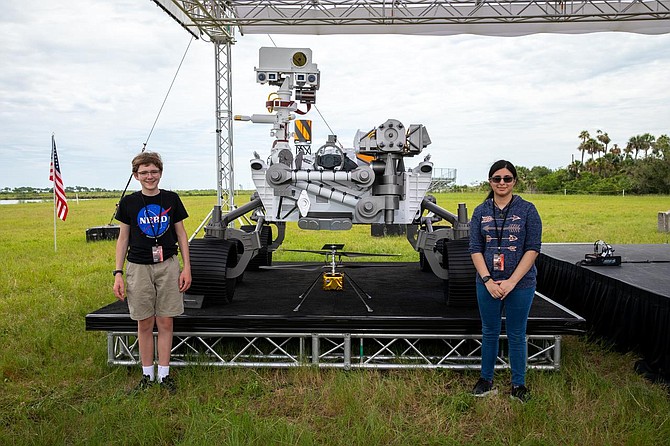 Students Alex Mather, at left, and Vaneeza Rupani, stand near the countdown clock at the News Center at NASA’s Kennedy Space Center in Florida on July 28, 2020. Mather named the Perseverance rover, and Rupani named the Ingenuity helicopter. 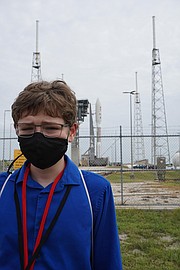 Alex Mather with the rocket to Mars behind him.

seventh grader Alexander Mather was in his element. He recently named the Mars rover “Perseverance,” and won a NASA contest to earn his place on the deck at Cape Canaveral.

It took perseverance for the NASA team to send a rocket to Mars, and more perseverance for Alexander to win a competition to name the Mars rover that’s packed onto the NASA rocket, so it was an all-around fantastic experience that he will never forget.

“These were American heroes,” he was out there with. “Perseverance just kind of came to me, it was best for the mission, that’s why I chose it,” Alexander said. Perseverance has a human quality, and that played heavily on his choice.

The name contest began last August. Nearly 4,700 volunteer judges consisting of educators, professionals and space enthusiasts from around the country, reviewed submissions to help narrow the pool down to 155 semifinalists. Once that group was whittled down to nine finalists, the public had five days to weigh in on their favorites, logging more than 770,000 votes online, with the results submitted to NASA for consideration. The nine finalists also talked with a panel of experts, including Dr. Glaze; NASA astronaut Jessica Watkins; rover driver Nick Wiltsie at NASA's Jet Propulsion Laboratory in Pasadena, California; and Clara Ma, who, as a sixth-grade student in 2009, named Curiosity.

The experience has had a huge impact on Alex, said his mother Erin Mather, who was on the trip to the launch pad in Florida. “Our favorite part was definitely the launch, the NASA folks seemed calm and confident but we couldn’t help but feel nervous,” she said.

Perseverance through the same contest. Her name for the helicopter was “Ingenuity,” and she was also on the balcony watching the launching.

According to NASA, perseverance is expected to land on Mars on Feb. 18, 2021. The rover will search for habitable conditions in the ancient past and signs of past microbial life on Mars. It will be the first mission to get samples of the planet and bring them back to Earth. The launch date was originally planned for July 17, but they pushed it back a few days, so the landing date could change by a few days.

As with others his age, Alexander has many other interests in addition to space travels. He’s into robotics also, and explained the link to the term “Arduino,” which is an “open-source electronic prototyping platform enabling users to create interactive electronic objects,” their company information stated. Alex credits his parents for sending him to space camp for his eleventh birthday., and his father David said that the camp was a big influence. “He wants to go to Mars. He’s always been interested in science and space,” David Mather said.

In early March when the votes had been tallied up, the officials at Lake Braddock got word of Alex’s winning entry and gathered everyone in the auditorium for the announcement. The surprise announcement was aired live from NASA in California. Thomas Zurbuchen, associate administrator for the science mission directorate at NASA headquarters in Washington, D.C., says, “Curiosity is always a part of exploration, but the flip side of curiosity is perseverance. Perseverance and curiosity are what exploration is all about.” So it was Alex’s entry along with his essay, which he read aloud, that won the main prize.

He's even got a NASA mask to show for it.

In the essay, Alex talked about the achievements of the human race. “The human race will always persevere into the future,” the essay said. Fairfax County Public Schools Superintendent Scott S. Brabrand addressed Alex and the students at Lake Braddock. “This school is planting the seed in you. This school will have a lasting presence in space,” Brabrand said.

Alex’s mother originally saw the contest come across the NASA.gov feed and asked Alex if he’d be interested. “Once I saw the article announcing the contest, I was so excited that not doing it was not an option,” Alex said. Sister Kyra, a Sangster Elementary School student, looked up to him. “I’m really proud of my brother. He did an amazing thing,” she said. Alex went to Sangster also.

Alex’s goals are to get his high school diploma, go to college and major in engineering or space engineering, and then work at NASA. He’s shown interest over the summer with model rockets and programming. “We hope this has a lasting impact,” Erin Mather said.

The naming contest partnership is part of a Space Act Agreement in educational and public outreach efforts between NASA; Battelle of Columbus, Ohio; and Future Engineers. Amazon Web Services is a prize provider for the Mars 2020 naming contest.