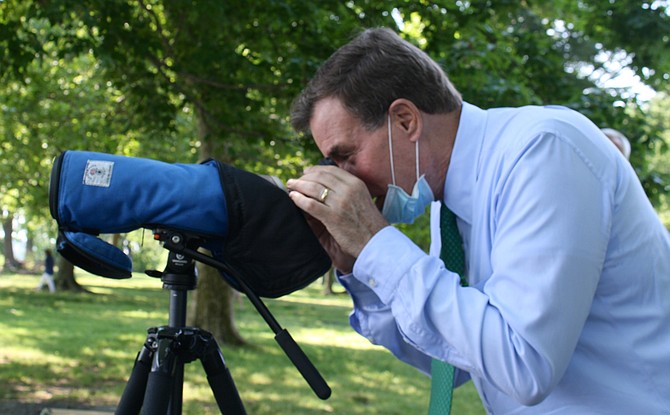 Sen. Mark Warner checks out an osprey off the shores of Belle Haven Park, visiting to talk about bipartisan support for the Great American Outdoors Act. Photo by Mike Salmon.

The president signed the Great American Outdoors Act into law this week, a bill championed by U.S. Sen. Mark R. Warner (D-VA). The bipartisan legislation includes Warner’s Restore Our Parks Act, which would help tackle the $1.1 billion in deferred maintenance at Virginia’s parks and could create up to 10,340 jobs in the Commonwealth alone. The legislation overwhelmingly passed in the House of Representatives earlier this week and was approved by the Senate in June.

“As the economic toll of the COVID-19 pandemic continues to financially strain communities across the country, this new law will help create tens of thousands of jobs and make a positive economic impact for gateway communities that depend on our national parks,” said Warner. “Now that this bill is the law of the land, Virginia’s historical sites will finally start receiving crucial repairs that have been postponed for years. I want to thank my colleagues for joining me in my years-long effort to create jobs and make sure our nation’s historical treasures are around for years to come.”

In June, the National Park Service released a report that estimated that an average of 40,300 direct jobs and 100,100 direct and indirect jobs would be supported nationally by the Restore Our Parks Act if passed as part of the Great American Outdoors Act. In Virginia, it is estimated that 10,340 jobs would be created or supported as a result of Sen. Warner’s push to address the national parks backlog.

Sen. Warner’s effort to address the maintenance backlog began in March 2017, when he worked with Sen. Rob Portman (R-OH) to introduce the National Park Legacy Act.

In March 2018, after extensive negotiations among Sens. Warner, Portman, Alexander, and King, the bipartisan group introduced the Restore Our Parks Act, a bipartisan consensus proposal endorsed by the Trump Administration, to invest in overdue maintenance needs at NPS sites. The bill would reduce the maintenance backlog by establishing the “National Park Service Legacy Restoration Fund.” In February 2019, Sen. Warner reintroduced the Restore Our Parks Act, and the bill was overwhelmingly approved by the Senate Energy and Natural Resources Committee in November.

In March 2020, following the president’s announcement that he would back the bipartisan Restore Our Parks Act as well as full and permanent funding for the Land and Water Conservation Fund, Sen. Warner, along with Sens. Cory Gardner (R-CO), Joe Manchin (D-WV), Steve Daines (R-MT), Portman, King, Alexander, and Richard Burr (R-NC) introduced the Great American Outdoors Act, which would provide $9.5 billion over five years to the National Park Service, Forest Service, Fish and Wildlife Service, Bureau of Land Management, and Bureau of Indian Education to address the deferred maintenance backlog at these agencies. The legislation would also provide permanent, mandatory funding for the Land and Water Conservation Fund, which provides states and local communities with technical assistance, recognition, and funding to help preserve and protect public lands. Virginia has received approximately $368.5 million in LWCF funding over the past four decades to help protect dozens of national parks, wildlife refuges, forests, trails and more.