Award for his efforts to pass the Great American Outdoors Act 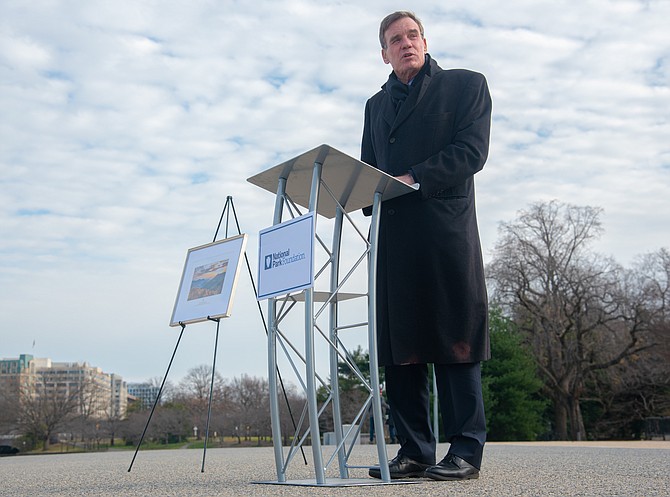 Monday, Dec. 7, at an outdoor and socially-distanced ceremony at the Thomas Jefferson Memorial, U.S. Sen. Mark R. Warner (D-VA) was awarded the National Park Foundation’s Hero Award by Foundation President, Will Shafroth. The award commemorates Sen. Warner’s work in getting The Great American Outdoors Act, a bill he championed, signed into law.

“As a lifelong advocate of our national parks and public lands, I am honored to be an inaugural recipient of the National Park Foundation’s Hero Award. I am incredibly proud that Congress was able to come together and pass The Great American Outdoors Act this year, which included my bill – the Restore Our Parks Act – that will allocate up to $6.65 billion to the National Park Service to address critical maintenance needs at our beloved national parks,” said Sen. Warner. “This bipartisan legislation represents a truly once-in-a-generation investment in our national parks and other public lands that will protect these cherished sites for decades to come. It’s only fitting that we were able to celebrate at the Jefferson Memorial, which will in fact be one of the first projects to receive funding from the new law. Ushering the bill’s passage and eventual bill signing wouldn’t have been possible without the tireless advocacy of the National Park Foundation.”

“As we reflect on Senator Warner’s leadership in passing the Great American Outdoors Act, the National Park Foundation is proud to recognize his commitment to national parks across our nation,” said Will Shafroth, President & CEO, National Park Foundation. “A true park hero, Senator Warner has been a champion for Virginia’s treasured places such as Shenandoah National Park, Great Falls Park, Petersburg National Battlefield, and Fort Monroe National Monument, among others. He has also been a great proponent for the Foundation’s work to enhance national parks through philanthropy, and we are grateful for his ongoing support.”

The Great American Outdoors Act is a product of Sen. Warner’s nearly three year initial effort to provide relief to national parks in Virginia, where the maintenance backlog currently sits at $1.1 billion dollars.

In June, the National Park Service released a report that estimated that an average of 40,300 direct jobs and 100,100 direct and indirect jobs would be supported nationally by the Restore Our Parks Act if passed as part of the Great American Outdoors Act. In Virginia, it is estimated that 10,340 jobs would be created or supported as a result of Sen. Warner’s push to address the national parks backlog.

Sen. Warner’s effort to address the maintenance backlog began in March 2017, when he worked with Sen. Rob Portman (R-OH) to introduce the National Park Legacy Act, which would have eliminated the NPS maintenance backlog by creating a thirty-year designated fund to take care of maintenance needs at visitor centers, rest stops, trails and campgrounds, as well as transportation infrastructure operated by NPS such as the George Washington Memorial Parkway and Arlington Memorial Bridge. That same year, the U.S. Department of the Interior announced its own proposal, drawing heavily on the initial proposal from Sens. Warner and Portman. However, the Administration proposal – which was introduced in the Senate as the National Park Restoration Act by Sens. Lamar Alexander (R-TN) and Angus King (I-ME) – would not have established a dedicated funding stream for NPS maintenance.

In March 2018, after extensive negotiations among Sens. Warner, Portman, Alexander, and King, the bipartisan group introduced the Restore Our Parks Act, a bipartisan consensus proposal endorsed by the Trump Administration, to invest in overdue maintenance needs at NPS sites. The bill would reduce the maintenance backlog by establishing the “National Park Service Legacy Restoration Fund” and allocating existing revenues from onshore and offshore energy development. This funding would come from 50 percent of all revenues that are not otherwise allocated and deposited into the General Treasury, not exceeding $1.3 billion each year for the next five years. In February 2019, Sen. Warner reintroduced the Restore Our Parks Act and, the bill was overwhelmingly approved by the Senate Energy and Natural Resources Committee in November.

In March 2020, following the President’s announcement that he would back the bipartisan Restore Our Parks Act as well as full and permanent funding for LWCF (Land and Water Conservation Fund), Sen. Warner, along with Sens. Cory Gardner (R-CO), Joe Manchin (D-WV), Steve Daines (R-MT), Portman, King, Alexander, and Richard Burr (R-NC) introduced the Great American Outdoors Act, which would provide $9.5 billion over five years to the National Park Service, Forest Service, Fish and Wildlife Service, Bureau of Land Management, and Bureau of Indian Education to address the deferred maintenance backlog at these agencies. The new law would also provide permanent, mandatory funding for the LWCF, which provides states and local communities with technical assistance, recognition, and funding to help preserve and protect public lands. Virginia has received approximately $368.5 million in LWCF funding over the past four decades to help protect dozens of national parks, wildlife refuges, forests, trails and more.