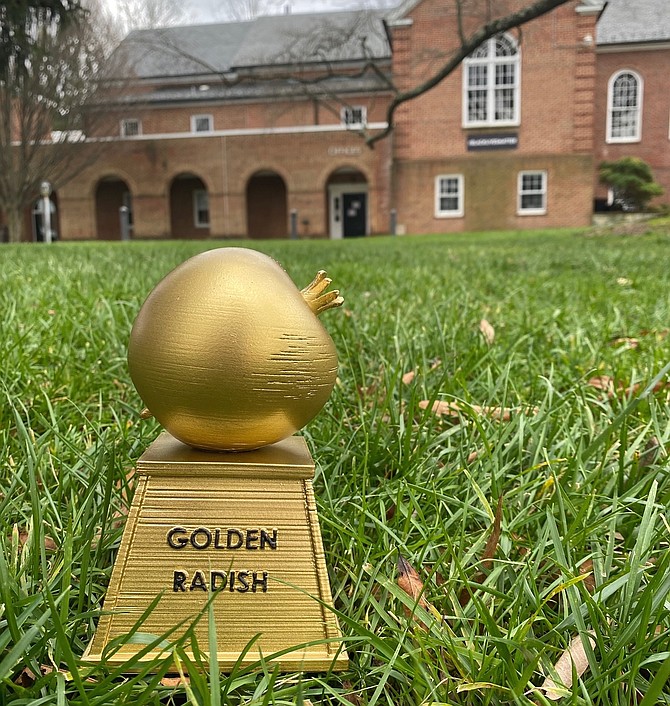 The Golden Radish Award is displayed in the yard outside of Rock Spring United Church of Christ on Little Falls Road in Arlington, where church space was donated through the spring and summer for volunteers to bag vegetables to be distributed to food insecure neighbors. Photo contributed 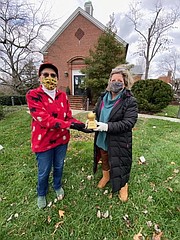 Rev. Kathy Dwyer, Senior Pastor of Rock Spring United Church of Christ, and Becky Halbe, Program Coordinator, show off the award at Rock Spring. This award will be officially presented at the virtual Friends of Urban Agriculture meeting on Dec. 8.

Each year, Arlington Friends of Urban Agriculture gives out the Golden Radish Award to a person, group or business that has made a significant contribution to advancing urban agriculture issues, policies, programs and enterprises in Arlington. The mission of the Friends of Urban Agriculture: To build a resilient, community-driven urban agriculture sector that provides a fair, healthy, sustainable food system for all Arlingtonians.

Volunteers in the food bagging program met for several hours twice a week at Rock Spring United Church of Christ during the spring and summer to package donated collards, beans, potatoes, squash and other vegetables grown at area gardens around Arlington.

Becky Halbe, Program Coordinator, said the donated produce that was packaged and delivered by Rock Spring totaled 6,826.5 pounds and the gleaned produce that came to Rock Spring totaled 2,668.5 pounds. The bagging program started June 1 and ended Oct. 29. Halbe said the produce went to many area food pantries and distribution sites based on their need, distribution dates, timeframes to accept produce and their ability to refrigerate if necessary.

Halbe says many of the volunteers were seniors, some in their 80s, that had been rejected by other volunteer organizations due to their age, but they reported feeling safe.

Halbe said one of her favorite gleaning memories is harvesting collards on Good Friday and learning that DC Central Kitchen cooked and served those same collards on Easter Sunday.