Warns residents to lock their cars to prevent thefts 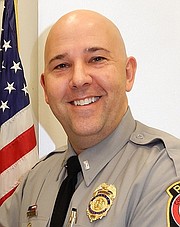 At the Dec. 2 meeting of the Sully District Police Station’s Citizens Advisory Committee (CAC), Lt. Josh Laitinen, the assistant station commander, gave local residents an update on crimes in the community. And as always, larcenies from vehicles are a continuing problem.

“We have about 40 per month in the Sully District,” said Laitinen. “Typically, items are taken from unlocked vehicles – so lock your cars and don’t leave any valuables inside. Airbags are being stolen, as well.”

In addition, he said the police have received calls regarding bill-payment checks being stolen from mailboxes. Then, said Laitinen, the thieves altered these checks and cashed them for a higher amount than the sender intended.

Another recent problem has been some tire slashings in Centreville’s Crofton Commons and Compton Village neighborhoods. “Our officers are working hard to identify the individual responsible for these crimes,” said Laitinen.

“But the community is the Police Department’s eyes and ears,” he continued. “So if you see anything suspicious – even on your home-security cameras – please let us know. Check that footage. Every little bit of information you can give us helps.”

He said police are also following up on a spate of robberies along Route 50. “People purchase something, like a cellphone, for example, over the Internet,” explained Laitinen. “And then, they arrange online to meet up with the seller, who robs them, instead. Whenever you’re doing such a transaction, you should do it in a public or well-lit area. There are two spaces, right here, in the police-station parking lot designated specifically for Internet exchanges.”