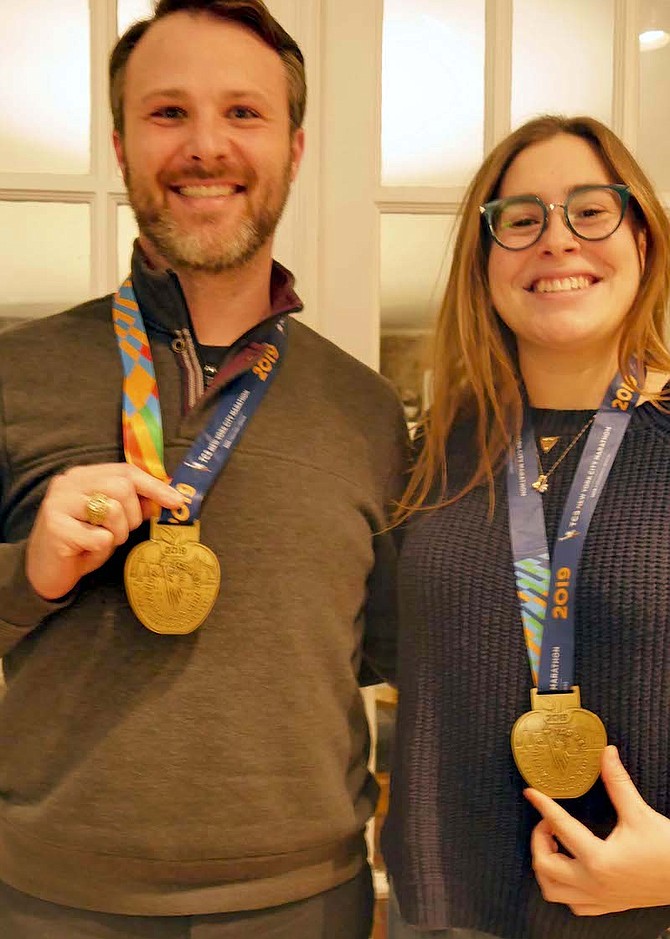 It’s been almost a year since Desirè (Desy) Tumbarello came to America as an au pair and ran the New York City (NYC) Marathon with her host father, Josh Babb.

Tumbarello says, “I decided to go with the best family. I see the family picture and Josh text me and we talk a lot. There was something familiar with my traditions.”

Tumbarello remembers getting off the bus from New York City with the other au pairs at Tysons Corner. It was a cold day and she was wearing a big furry hood. “I wondered can you survive.” Then she saw her family with a large welcome sign and balloons. “I felt something special, familiar to my family. I started to cry.”

Babb says, “When we saw Desy, it hit home for us. It was no longer a piece of paper. It was a person. I’m a big cryer, too, so we were both crying.”

Tumbarello says, “Maybe the first two weeks were hard for me.”

Tumbarello says, “I told them I respect you, and you respect me.” She says, “seven-year-old Abby helped me a lot with the younger boys. She would say ‘we do that this way.’”

Babb says this program is about welcoming someone into your house who has put themselves out there. You are a part of the family and see the good, the bad, the ugly. There is no perfect family.” He continues, “This is not just a work relationship. She is sharing your house, your life.” Babb says he fell in love with Italian culture.

In addition, the kids got an honest look at another culture. “They learned some conversational Italian, another cuisine like pesto pasta and pumpkin risotto that she cooks at home in Sicily.” On the other side she learned “the wild, wacky side of our family.” Babb explains he and his wife are both from Texas. “We are big barbecue, country music as well as Christian and pop and have a lake house in Texas where we visited several times.”

Tumbarello adds, “I travel a lot with them. I am so lucky with that.” In addition to traveling in a number of southern states and a camping trip to the Outer Banks, local travel included a trip to Costco and Home Depot. “Everything is so big here. I never saw a big place like that.” And a walk to the Italian Store down the street where she could talk to the staff.

Babb says, “She helped pick out olive oil. She looked at the back of the cans and said, ‘this is 10 kilometers from my house.’”

Tumbarello says, “I love Arlington. It’s so peaceful. If you want to meet people, you just take a metro and it’s 5 minutes to D.C. “And there’s a lot for kids—libraries, playgrounds, good for an au pair, can do a lot of stuff.”

Early in her stay Cultural Care Au Pair asked her if she would like to run the NYC Marathon to help sponsor the nonprofit Cultural Care Kids First Foundation, which supports economically disadvantaged children worldwide. She had never been a runner but she said, “I run, yes I do that.”

Tumbarello says, “It was crazy. This year I wanted to improve myself in a different way, get out of my comfort zone.”

Babb was already a runner and had run the New York City marathon in the past. He had a personal coach that he thought could work for Tumbarello.

Tumbarello says, “The first week it was small. I ran two miles the first day.” She remembers when she thought, “I have to run eight miles.”

Babb told her there will come a time when you say 8 miles was nothing.” Week by week for 18 weeks, she added more miles “and then I did the long run with my friend from Italy.”

The Friday before the Nov. 3 race Babb says Desy and the whole family (Abby-7; Charlie-5; Andrew-3; Josh and his wife, Alison) “trained" up from Union Station to New York City.

Babb says, “It was neat. The whole city really goes out for it. You see the big Expo with the T-shirts, the vendors, all the pictures and the 55,000 other runners. It hits that you are going to run the biggest marathon in the world. It sets in.”

Babb says the weather was in the 50s, perfect running weather.

At 5:30 a.m. Babb and Tumbarello boarded the bus where they watched the sun come up as they traveled from Midtown to Staten Island. We went through 5 boroughs,” Babb says, “to Central Park. We could see that once we got on the bus there was no way back except to run.” He said smiling, “We thought maybe we got on the wrong bus.”

Tumbarello came to America as part of the Cultural Care Au Pair program regulated by the State Department. They sponsor exchanges with American host families and au pairs from more than 20 different countries. The program provides families with flexible, reliable childcare while giving young people an opportunity to experience the U.S.

When Tumbarello leaves in February she will take a quick trip to California and then return to Sicily to study for the medical school exam. “It is a big test and I will have to study hard.”

Babb reminds her, “you ran the New York City Marathon; I know you can pass this big test.”

For further information on the Cultural Care Au Pair program, see the website at culturalcare.com or 1-800-333-6056.