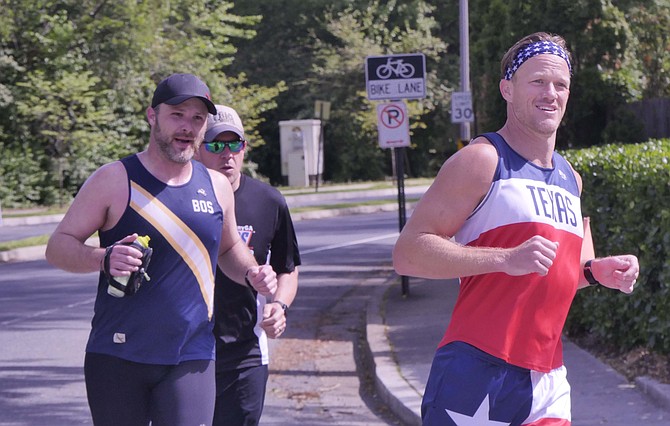 Babb (left) is joined by his friends, Jered, originally from Texas, and Peter, who lives locally, to keep him company on his marathon run. Photo by Shirley Ruhe.

It is 10:08 a.m. on Saturday, May 2 and Josh Babb has finished almost half of his marathon circling up and down his block on the cul-de-sac off Kirkland Street in Arlington. Babb is joined off and on by several of his friends who rotate in and out of the run to keep him company, but he is the only one who will run the entire distance. Jered, drove up from S. Carolina last night to surprise him. “He ended up running 20 miles of the race with me and was crucial in helping me finish the race, especially in the later miles,” Babb said.

Babb is an experienced marathon runner, but unfortunately developed a blister that is slowing him down a little today. This is the first blister he’s ever experienced in an attempt to quickly build up enough weekly mileage to have the endurance to run the marathon.

“This was the hardest marathon of the eight marathons I’ve run to date,” Babb said. “The combination of the turns, the really short course that didn’t allow you to get into a rhythm and the blister that had formed earlier in the week and that got progressively worse during the ‘Cul-de-sac Marathon.’”

Babb is running the marathon to raise funds for his church’s food pantry. Columbia Baptist Church runs a food pantry every Saturday in Bailey’s Crossroads. It generally serves 200-300 families. But according to Rev. Kris Clifford, one of the church pastors, the Capital Food Bank where they get their food is depleted.

Babb set a goal of $2,620 (26.2 miles in a marathon) but says he has raised over $5,500 from 95 contributions through a Go Fund Me page and social media. Clifford says there have been church members, family friends and just plain strangers supporting Babb’s marathon run. This week, the church has been able to purchase a lot of fresh eggs for the food pantry.

A car drives past the barricade on Kirkland Street, and a voice yells “go Josh.” Another friend joins the group rounding the curve for another lap, and his 6-year-old daughter skips along.

Babb explains several good friends joined in to make this truly a team effort. In addition to Jered, it included his friend Peter, who ran the first 20 miles; Kevin who ran the last 15 miles; Erin who was going to run 3-5 miles and jumped in for the last 10 miles; and Guilia who planned to just cheer and instead ran 12 miles.

Babb’s wife sits at a table in front of their house with their three children, a few friends and church members (with proper social distancing) to offer Gatorade, fruit and energy drinks as the runners round another curve.

Since Babb loves to run and also to create avenues for people to help others, this seemed the perfect way to combine his passions. “My wife and I kicked around a number of different ideas, ways to get involved and settled on this crazy idea.”

Five hours and 437 laps later, Josh completes his final figure eight. “It was truly one of the hardest, most mundane ways to cover this kind of distance that you could imagine. …The physical challenge was hard, but it was also a mental struggle.”

But he says, “in this time of uncertainty we decided when hundreds upon thousands of our neighbors have lost their job and are fighting to keep food on the tables—there are good people standing in the gap and we need to help them.” He concludes, “the church is about more than a building—it’s about showing the love of God through tangible actions.”