Upgraded facility will address the safety and efficiency of this county asset. 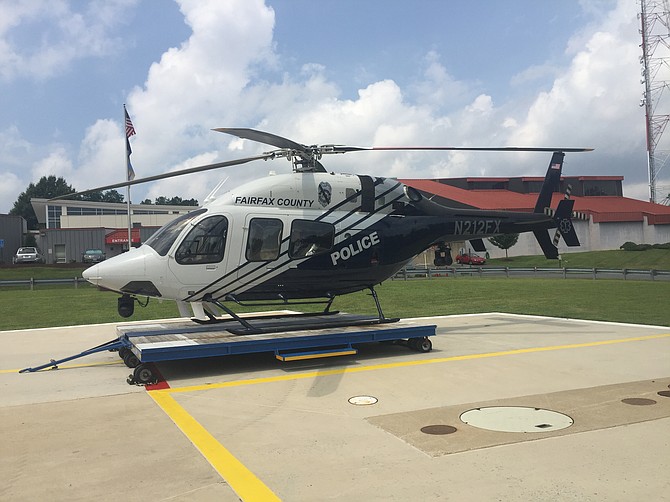 In the first week of the new year, the Fairfax County Police Helicopter Division flew off to 10 missions ranging from missing persons calls to an overturned boat and river rescue in Prince William County. There are situations coming up all year that require more than just a squad car, so when the division showed the need for an updated helipad out at their base in Chantilly, the county came through with $13 million and is now making it a reality.

The Police Department has identified the Police Heliport at the West Ox Road Complex as a critical facility in need of renovation/expansion or replacement. The facility has exceeded its intended life cycle and no longer meets the needs of the Police Department. The facility is deficient in office space, classroom space, parts storage space, paramedic training requirements as well as staff locker areas. In addition, the current helicopter bay size is inadequate to perform efficient and safe maintenance procedures, police officials said.

When the new heliport was looked at by the Fairfax County Board of Supervisors in early January, Supervisor Pat Herrity (R-Springfield) supported the move. “I am delighted that the police heliport, including the helicopter pad, will finally receive the much-needed upgrades and repairs,” he said. “These improvements will create a more secure area for the police helicopter, safer conditions for the officers, and enable first responders to better serve the residents of Fairfax County.”

As part of the 2015 Public Safety Bond Referendum, $13 million dedicated for the new Police heliport was approved as part of the FY 2020–FY 2024 Adopted Capital Improvement Program.

Currently,the existing heliport is enclosed only by a guard rail that extends along the western side of the property along Academy Drive, and partially along the northern side between the wet pond and the helicopter facility, and partially along the south side along the access road to the vehicle services building. This rail is two and a half feet high and provides no security for the police staff, operations and equipment. The helicopter building itself as well as the parking area are openly accessible to the public. An eight-foot, non-climbable, security fence is proposed to surround the heliport area.

The heliport is part of a larger county operations area to include the Fairfax County Fire Academy in the west of the building, and the Department of Vehicle Services building in the south. There are no residences in the immediate surroundings that could be impacted. The view from West Ox Road is shielded by existing vegetation.

This item has been coordinated with the Department of Planning and Development.

“Currently, there are roughly 150 helicopter missions a month and over 80 medical evacuations a year throughout Fairfax County,” Herrity added. “We must continue to equip our law enforcement members with the necessary tools to keep our communities safe,” Herrity said.

There has been complaints about helicopter noise in Northern Virginia, and while many of the helicopters flying around are military, the Fairfax County Police Department adopted a policy they call “Fly Neighborly,” with these steps to reduce noise.