Fairfax One: ‘Ambulance in the Air’
Votes

Fairfax One: ‘Ambulance in the Air’ 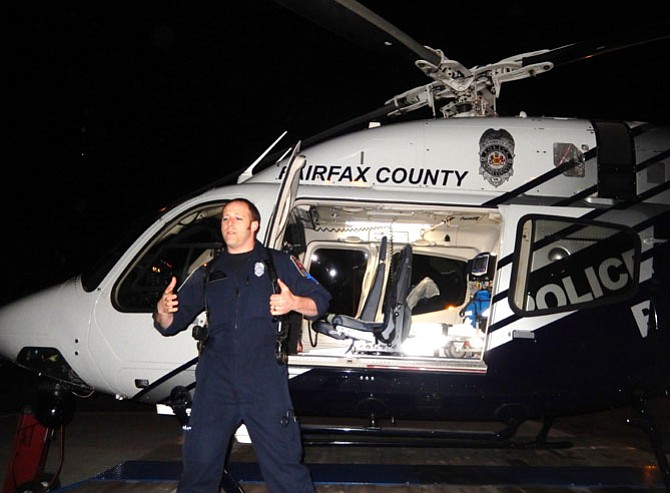 PFC Nick Taormina, a paramedic and police officer, talks about the Fairfax One helicopter. Photo by Bonnie Hobbs.

Members of the Sully District Police Station’s Citizens Advisory Committee (CAC) recently toured Fairfax County’s heliport, got to speak with a pilot and saw the Fairfax One helicopter up close.

It’s a twin-engine, Bell 429 and does both police and medivac missions for the county. And one of its pilots, PFC Nick Taormina, is a paramedic as well as a police officer.

“We go on several thousand police missions a year,” he said. “We try to find criminals, such as burglars, and search for missing children and adults. The aircraft has a camera, a spotlight and an advanced navigation system.”

It’s also equipped inside with a cot and medical equipment, including a defibrillator and a medical monitor that displays the patient’s vital signs. Said Taormina, “It’s like an ambulance in the air.”

Each time the helicopter flies, it’s staffed with a crew of three — the pilot and two flight officers — and all the flight officers are paramedics. “Paramedics take a year of classes to be certified,” said Taormina. “Then they undergo training with the aircraft for three months before they can go up in the air.”

Also inside the helicopter are various radios to communicate with fire and police personnel, air traffic control and hospitals. “We’ll alert a hospital about the condition of a patient we’re bringing in,” said Taormina. “Working together as a crew is key.”

Two mechanics are on duty to keep Fairfax One in tip-top shape. “And we have a second aircraft because we work 24/7,” said Taormina. “So one gets maintained while the other flies. We can get into the air two minutes after getting a call. We use road maps to find houses and exact addresses.”

He said they fly pretty low, at an altitude of about 1,000 feet, so they can see well with their camera. Certain factors determine when the helicopter is used to whisk people to hospitals, rather than an ambulance.

“It depends on the time of day — for example, if there’s an accident on I-66 in rush hour — and the severity of the injuries,” explained Taormina. “If there’s a burn injury, for instance, it’ll take us just 10 minutes to get to the Washington Hospital Burn Center in D.C.”

When having to land in a spot with heavy traffic, he said, “The Fire Department will close off the roads and establish a landing zone for us, although sometimes the police do it, too.”

The aircraft averages 160 mph and can fly in 35-knot ground winds. Two crews a day are assigned to it, each working a 12-hour shift. There are five or six pilots, plus 10 police flight officers.

“We’re involved in mutual aid with jurisdictions including Spotsylvania, Winchester, Prince William, Loudoun and even West Virginia,” said Taormina. “We’re the only police medivac helicopter from the Potomac to Richmond.”

Each crew receives two to three hours of flying time a day, going on four to five missions. The average call lasts an hour or two. “But we could be flying as much as 10 hours on a particularly busy day,” said Taormina. “We usually burn a gallon of gas a minute and, at any given time, we normally have 100 gallons [in the tank].”

He’s been with the Fairfax County Police Department’s helicopter division since 2008. The toughest part of his job, he said, is any accident involving really young children. Best, said Taormina, is “being able to fly around the area, loving aviation and doing both police and medivac work.”