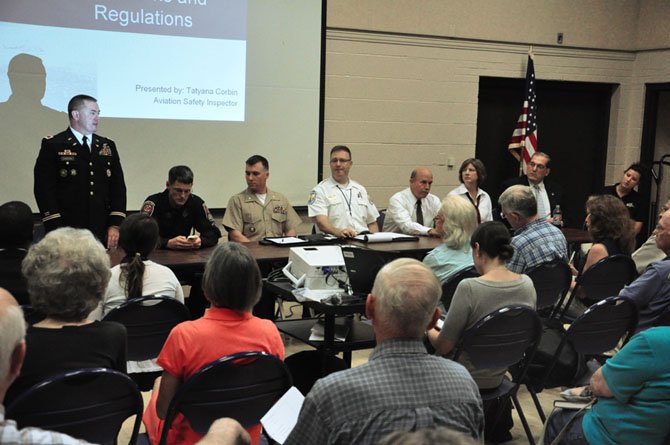 McLean — As a resident of McLean Hamlet, located just west of the Beltway and Tysons Corner, Behram Shroff is used to the sounds of traffic on the streets. But the traffic above the neighborhood’s head, specifically helicopter flights, is another issue. He estimates eight to ten flights over the neighborhood per day, each one quite noticeable to the point of rattling windows and even lost internet connections.

"What we are looking for is a much more restrictive time period for flights and to have them come in at a higher altitude," he said. "Our observation has been that the flyovers of McLean Hamlet and Tysons Corner have been a steady, everyday pattern."

McLean residents met with local officials and aviation professionals Thursday, July 26 at the McLean Community Center, to get information and work toward solutions for the helicopter noise problem.

Three helicopter routes affect McLean, one that goes along the Potomac River, one over the Beltway and one over Leesburg Pike. Routes are segregated from fixed wing altitudes, and Bob Laser of Washington National Airport says that the zones for local routes call for an altitude of about 1,300 feet.

"There has not been an increase in the tempo of operations for helicopters in the National Capital Area," said Bob Laser of Washington National Airport, despite claims from many residents that the flights have increased over the last few years.

Many residents complained of flights they heard at 2 or 3 a.m. Laser said those would only be specific flights (such as transporting the president) or Medevac choppers. He said there are no flights that do not have a specific objective, maintenance and operation costs prohibit any additional use. He also said that any pilots flying within seven miles of the city’s airspace are credentialed by multiple local and federal agencies.

"We encourage all of our pilots to use the maximum altitude that’s available to them," he said. "And I guarantee you, myself and the others in this room will bring this up to our operators, to make sure they’re aware."

Laser admitted that most flights would not be able to be changed, especially those that are defense-related missions around local facilities.

"Our operations are restricted by [standard operating procedure] to 800 feet above ground level and we’re very particular about that," he said. "At night, 500 feet is our absolute, bottom, never-go-below-that altitude. The only time I believe anything goes down to a couple hundred feet is when they spray for gypsy moths."

State Sen. Barbara Favola (D-31), Del. Barbara Comstock (R-34) and Supervisor John Foust (D-Dranesville) said they would be in contact with the Federal Aviation Administration and other aviation agencies about setting up a "noise portal." The portals have served other communities in close proximity to airports or aircraft routes, and provide a phone number and other information for residents to report what they feel are flights that are flying too low or at wrong hours.