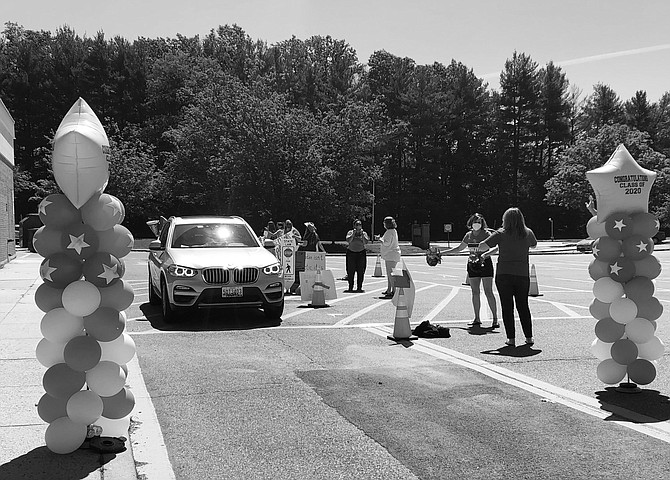 Wootton High School seniors were greeted with balloons and applause when they arrived at the school to pick up caps and gowns last week. Photo by Stephanie Labbe 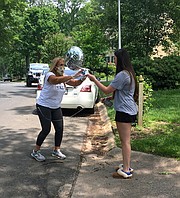 Though they cannot be together in person, graduates from Wootton High School are all listed on a sign in front of the school.

The Thomas S. Wootton High School Class of 2020 had two graduation ceremonies this week. Twice the usual number, doing double duty for the graduates who might be wishing for just one “normal” graduation.

Because of the Coronavirus Pandemic, Montgomery County Public Schools held a Universal Virtual Graduation Celebration Sunday, June 7. It was planned to honor students from all the 25 county public high schools plus graduates from Blair Ewing, Longview, RICA and Rock Terrace.

The event was televised on the Montgomery County Public TV channel and the MCPS website. It was hosted by Leon Harris, News4 Washington anchor, and the students took the spotlight with musical performances throughout the show.

MCPS officials, school board members and county politicians all recorded notes of congratulations and encouragement. Student Member of the Board, Nate Tinbite, told the students not to dwell on “what should have been. We are a generation of resilience, …the path will grow brighter ahead.”

Keynote speaker was Chef Jose Andres, founder of World Central Kitchen, an organization that has fed millions of people in crises around the world, and looking to “create smart solutions to hunger and poverty.”

Andres used a number of cooking expressions in his talk to the students telling them, “You need to find your own recipe for life.”

“Find your passion and dream…empathy and compassion,” he said. “Just do it now, don’t wait for the perfect ingredients.”

Andres confessed that he never graduated from high school, or middle school, but, he said, “If a cook like me began to try to change the world one plate at a time, [you can too].”

After the conferring of diplomas to all the school system’s over 10,500 graduating seniors by the Board of Education, Harris led the students through the traditions of moving their tassels from right to left and throwing their caps in the air.

The ceremony ended with the names of all the graduates scrolling down the screen accompanied by remarks from a senior of each high school.

Both ceremonies opened with the traditional “Pomp and Circumstance.” That was followed by the singing of the National Anthem by the Wootton Chamber Singers.

Mason Miller, senior class president, addressed the graduates as did each of the other class officers: Hoala Ahmed, vice-president; Macy Fewell, secretary, and Nimisha Rangachar, treasurer.

“We are learning how to adapt in an ever changing [world],” Ahmed said. “The Class of 2020 is a force to be reckoned with.”

Seniors from the school’s choral groups sang “The Best is Yet to Come,” each recording their part from home.

Ms. Boldon was with the students through their four years at Wootton and recalled some of the highlights of the class. She spoke of academic honors, service hours and charitable work, music awards and sports highlights.

“Present circumstances in no way diminishes [your accomplishments],” she said. “We are counting on you; we are rooting for you.”

Nate Tinbite, Student Member of the Board of Education conferred diplomas on the students – virtually.

His declaration was followed by a list of the almost 546 graduates, most accompanied by an official senior photo and then by a second show of many of the seniors in their caps and gowns in casual home settings.

“It's not what I really wanted,” senior Farah Reyal said Saturday about the upcoming virtual ceremony. “But it’s the best we can do.”