Plans weren’t disclosed at the time of purchase, he said. 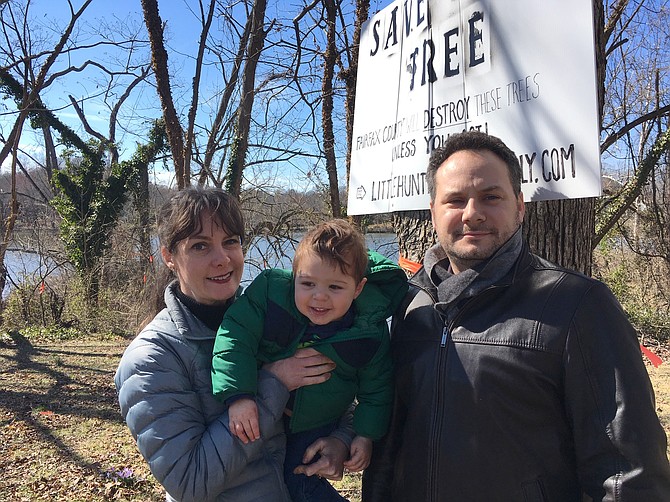 The Morgan family wants to save their trees. Photo by Mike Salmon. 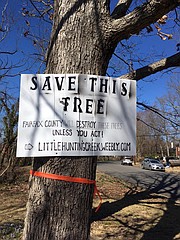 When Christopher Morgan moved into new his house on Little Hunting Creek, he says he knew nothing about the sewer replacement project that Fairfax County was planning that would require the removal of up to 20 trees right out front, and the use of a parcel of his land to store the construction equipment for about eight months.

The previous homeowner had made a deal with the county, as did his neighbor, but “I found out about this in October through the community newsletter,” Morgan said.

Now Morgan and his wife Sumrall are part of a campaign to get the county to change their plans, and have a petition signed by over 300 people that want to save the trees as well. Morgan is looking for the county engineers to be a little flexible, and alter their plans so the trees can be saved. Three “giant, old trees” in particular, that have been there for years. “Bald eagles literally perch in these,” he said. They moved to Mount Vernon from California so their son would have a good place to grow up and go to school.

They’ve gone to the project officials, and the office of Supervisor Dan Storck (D-Mount Vernon), trying to come up with another plan for the project, which has been on the books for some time, but was not mentioned when the Morgan’s bought the property last summer.

“We feel like we’re being a little bullied,” said Sumrall.

According to county documents, the sewer replacement project dates back to 2015, when the county ran a camera into the sewer that runs under Little Hunting Creek and “large amounts of debris and three major sags were discovered,” as county project information stated. “The footage also revealed a buildup of fats, oils, and grease (FOG) throughout the pipe, which required the sewer line to be placed on a 90-day pressure cleaning schedule.” Storck noted the importance of a new sewer.

According to Fairfax County, replacing the Little Hunting Creek sanitary sewer pipe will reduce the maintenance frequency and eliminate the need for the high level of maintenance currently required to keep the pipe operating; prevent costly emergency repairs; and reduce risks to public health and the environment. The new pipe is expected to serve the community for the next 50 years.

The sewer dates back to 1961 and needs to be replaced. Supervisor Storck is aware of both sides of the tree issue, and spent much time trying to see if there is an alternative for the construction plan, but none could be found. “There’s been a huge amount of effort to save these trees,” Storck said. He also noted that if the sewer pipes break, there would be a whole different set of problems for homeowners around the creek. Storck’s office arranged a meeting on Jan. 24 with county engineers and the Morgans.

The previous homeowner had worked with the county on this plan, and Morgan’s neighbor Glenn Ferri discussed it with the county engineers too, and saw the surveyors at work in the area over a year ago, he said. The question is, why weren’t the Morgans notified of this when they bought the house?

“No such easements were disclosed and we were also forced to look into that through other channels,” Morgan said in a document he wrote about the situation. “Easements didn’t come up in a title search,” Morgan said.

According to the National Association of Realtors, they have the following under hazards and disclosures on their website: “Home sellers face a variety of state and local environmental-disclosure requirements for radon, asbestos, lead-based paint, mold, and other potential dangers. When it comes to these matters, real estate professionals must disclose all known material physical defects on the property. In California, practitioners also have a duty to visually inspect the property.”

According to Virginia code | § 55-519 entitled “Required Disclosures For Buyer To Beware; Buyer To Exercise Necessary Due Diligence,” the owner of the residential real property shall furnish to a purchaser a residential property disclosure statement for the buyer to beware of certain matters that may affect the buyer's decision to purchase such real property. Such statement shall be on a form provided by the Real Estate Board on its website.

Morgan has consulted an attorney. “We’re trying to be good neighbors,” he said. There are hand written signs taped to the trees, and area children made drawings but the plans are in place for now.