Great Falls: Going Down to the River: Enjoy Its Beauty, Respect Its Power
Votes

Great Falls: Going Down to the River: Enjoy Its Beauty, Respect Its Power 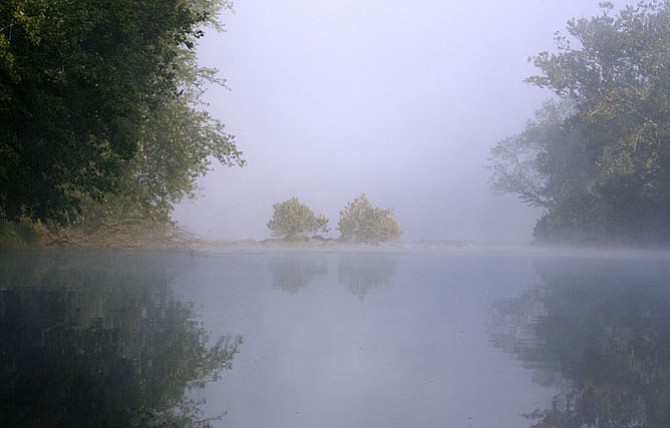 This image was taken from a boat off of Riverbend Park just as the sun was beginning to burn through the fog. The symmetry of the large trees on the edges of the islands with the two small trees in the center coupled with a complete reflection in the still morning water drew me in with my camera. Photo by Walt Lawrence

This image was taken in the month of January and illustrates what the falls can look like after a heavy rainstorm. I realize the water can go much higher especially after a hurricane when the overlooks can be flooded. This image has practically covered the falls and gives some sense of the power of the water as it has deposited an entire tree trunk on top of the rocks. I believe that tree remained in this position for a few years until a larger storm came through and floated the trunk away. 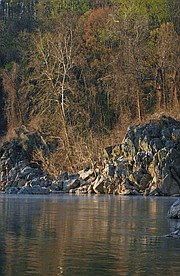 One of my favorite locations to shoot, as the sun rises the rocks, the river and the trees come alive.

Since I have been photographing the Great Falls area for several years I feel the most significant feature of our area is the incredible Potomac River that flows by us each and every moment of the day. I would urge everyone to go down to the river to get acquainted with its ever changing beauty and its deceptive power. Don’t just go to the overlooks at Riverbend and Great Falls Parks and then return to your car and leave. Spend some time hiking along the many trails that follow the river and get acquainted with the plants, the trees and wildlife that are found along the shoreline and in the parks. If the water is raging, then you can certainly appreciate the powerful force it exerts; however, if the water has a smooth surface, don’t think that the current is gone. It is always present. Just watch a leaf on the water as it floats by or put a paddle in the water and feel the current begin to take it from your hands. The river demands respect. While you’re at it, notice how the river also needs our help. Man-made debris can be found everywhere along the shorelines and on the islands. The scourge of plastic barrels, bags and bottles, rubber tires and other debris is all too visible. We all need to work at keeping the river clean. Recently I was preparing to print an image of rock formations near the falls and discovered graffiti had been scrawled across the rock face. I could not believe that someone would risk their life to climb down into this area just to tag a national landmark.

Go out Seneca Road to where the road ends and hike down to the river and follow the trails along the river. One evening in late winter, I was on the shoreline in this area and observed a full moon coming up as it was reflected in a section of the river called the Seneca Breaks. It was a magical moment as I had the whole place to myself. With this bright orange moon rising against a deep blue sky, I thought, I’ll bet George Washington passed by here and might have observed the same scene when he was surveying and working on the Patowmack Canal.

Go to Riverbend Park and hike along the trail that takes you west towards the Seneca Breaks or east into Great Falls Park. Better yet, rent a kayak, a canoe or a jon boat or launch your own and go out on the river and float around the many islands just west of the park. It is so peaceful on the water I almost feel like I could be floating on any river in America while in fact I’m just 15 miles from Washington, D.C. There are all kinds of wildlife and birds in this area. I’ve seen deer and raccoon drinking from the river, even a muskrat swimming along with a bunch of bluebells in its mouth. Perhaps the greatest thrill for me is to photograph birds such as eagles, osprey, egrets and herons as they perch, search for food and especially as they take flight. I have gone out in winter where the combination of cold temperatures and biting winds can make for a less than comfortable trip on the water but the opportunity to see migrating ducks, geese and swans seems to lessen the sting and warm the soul.

Go to Great Falls Park and after you have seen the falls from the overlooks. Start hiking eastwards along the trail that follows the Mather Gorge and observe the rocky cliffs that channel the river down to a place called Cow Hoof Rock. I like to set up my camera in this area and wait for the scene to unfold as the sun comes up and birds begin to fly up and down the gorge.

There is a lot to see and experience both along and on the river in this area called Great Falls. I would urge everyone to try to see it in all seasons of the year and at different times of the day. After an extreme storm it can be pretty spectacular. Sometimes the water is so high the falls are completely under water. After each storm, piles of uprooted trees, logs and other debris pile up against the western edges of the many islands. In one instance, the power of the river was very evident as it had wrapped a derelict aluminum canoe around a tree, as one would bend a piece of wire around a fence post. In the middle of a winter cold period, the snow and ice formations around the falls can take on strange and weirdly wonderful shapes. In the spring when the water is high and flowing hard, it takes on a beautiful bluish green color which means that the fishing for herons and humans will soon be good. In the summer after an extremely dry period when there is very little water going over the face of the falls, you might have to look a little harder around the edges to find the beauty which can still be found as water trickles around the crevasses to continue its journey to the Chesapeake.

But you don’t have to take just my word about the beauty of the river, even George Washington had a great appreciation for the Potomac. On a recent visit to his home at Mount Vernon, I saw several paintings of the Potomac that he had purchased and I counted at least two of Great Falls. So I invite you to just go down to river and enjoy its beauty, but be sure to respect its power.