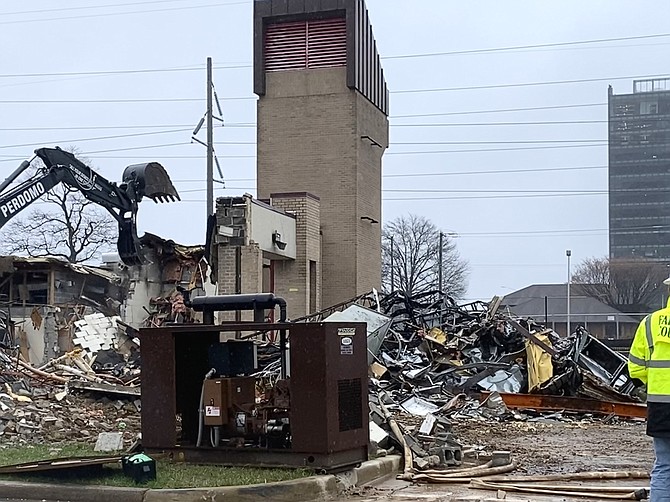 An excavator takes down the old Reston Station 25, a Fairfax County Fire and Rescue building, making room for a new station on the same site. Photo by Mercia Hobson.

The old 2 1/2-bay station is located in the Hunter Mill District of the County at 1820 Wiehle Ave in Reston. It lacked sufficient space for existing equipment, operational support functions, adequate female living space and a workout facility to maintain physical fitness according to Fairfax County's FY 2021 – FY 2025 Advertised Capital Improvement Plan. "Towed my share of fire apparatus out of Station 25," posted Lee Temple on the County's Fire and Rescue's Facebook. "Tight bays and aprons to maneuver out of," he said.

The larger replacement fire station is to be built on the same site and addresses anticipated increased demand for emergency medical, fire suppression, and all hazards services, according to Fairfax County's FY 2021 – FY 2025 Advertised Capital Improvement Plan. It is scheduled to be operational in early 2021.