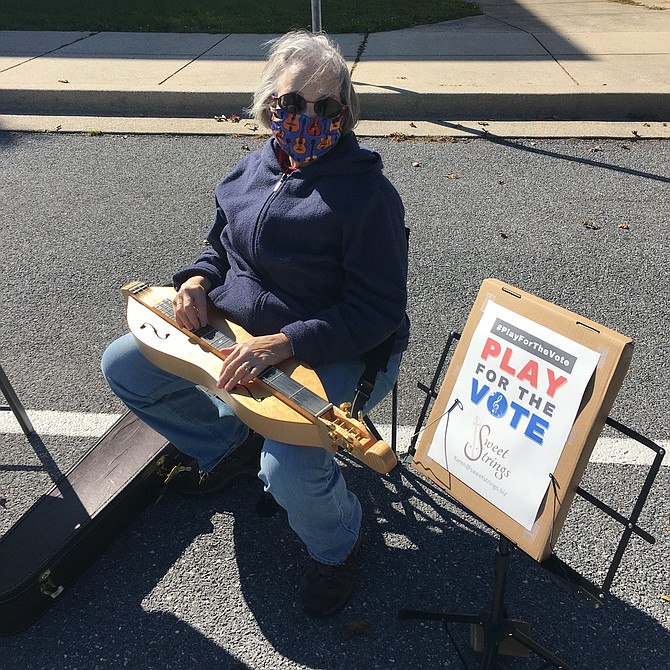 Potomac resident Karen Buglass plays her mountain dulcimer in front of the polls at Winston Churchill High School Tuesday as part of the national Play for the Vote program. Photo by Peggy McEwan

The night before Election Day at Potomac Community Center. 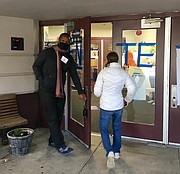 Darius A. Stanton greets voters outside the polling place at Potomac Community Center on Election Day. 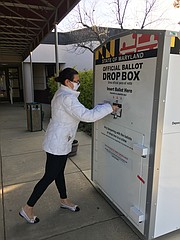 Nina Molkara, of Potomac, places her ballot in the drop box at Potomac Community Center on Tuesday morning.

Election Day 2020 arrived preordained as “an election like no other.”

That could mean changes required by the pandemic such as required face masks and social distancing, or it could mean early voting, mail-in ballots, early and late returns or, perhaps, the candidates themselves.

Whatever the reason, Election Day in Potomac was different this year. Most polling places did not have long lines, most also had discreet police protection – at Potomac Community Center there were two police cars parked across Falls Road. At Winston Churchill High School, two police cars were not as noticeable, but they were there, parked up a side street facing the school.

The Recreation Center even had a greeter, hired by the State of Maryland, to assist with crowd control. There was no need for that, but the greeter, Darius A. Stanton, was a friendly addition to the day.

“Welcome, thank you for coming,” he said to arriving voters and then walked them to the entrance and opened the door.

Most people responded with the same openness:

“It’s a privilege,” or “We’re happy to be here,” some responded.

There was no wait inside, with the gymnasium set up for 106 voters according to Shala Shamim, site manager.

The biggest rush they had was 42 people waiting when the doors opened at 7 a.m.

Though he did not arrive at the opening, one Potomac resident said he waited to vote today because he always votes on Election Day.

“I like to [vote on Election Day] because at my age this is the way it is,” he said. “The other aspect of it is if you do the early voting and something comes up, you can’t change your mind.”

Sima Andallibi, also of Potomac, said she had come to the Recreation Center two times in the last week but did not vote because it looked too busy.

Today though, it was perfect, she said. No wait.

Over at Churchill, the number of voters appeared even more sparse.

When the polls opened there this morning, there were “36, [voters] I think,” said Elizabeth Simon, a Co-chief Election Judge at the school.

“It's been a little bit slow,” another judge, Hank Greeves, said. “The consensus is that most people voted early.”

Churchill voters were serenaded by Potomac resident Karen Buglass playing her mountain dulcimer. The music was part of a nationwide program: Play for the Vote.

The program is new this year, started by Mike Block, a cellist from Boston, who began the nonpartisan initiative with the idea to increase voter turnout and making it a more positive experience.

Buglass, who also teaches the mountain dulcimer, said she gets a lot of political emails and saw the invitation to Play for the Vote among them.

“I am not involved with organizing; just a volunteer musician,” Buglass said. “I understand there are over 600 volunteers in 48 states. And this effort began only within the last four weeks.”

She said she volunteered because, ”I wanted to thank voters for showing up at the polls and offer something I hope will make any wait they experience more enjoyable.”