‘Eagles Can Soar Beyond These Skies’
Votes

‘Eagles Can Soar Beyond These Skies’ 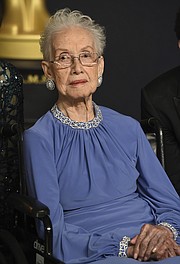 The City of Fairfax School Board voted unanimously Monday night to change the name of Lanier Middle School to Katherine Johnson Middle School. The change will take effect in July 2021, before the start of the 2021-22 school year.

Johnson helped send astronaut John Glenn into orbit around the earth and, later, was an integral part of Neil Armstrong’s moon landing. She was also one of the brilliant, Black, female mathematicians featured in the book and movie, “Hidden Figures.”

BY RENAMING the school after her, said City School Board member Toby Sorensen, “The message to our middle-school students is ‘Eagles can soar beyond these earthly skies at Katherine Johnson Middle School.’”

“Her contributions continued to serve the nation and helped ensure that the ‘Eagle had landed…and landed safely,’” added Board member Jon Buttram. “So I think it appropriate that the name Katherine Johnson for our middle school will inspire new generations of ‘Eagles’ for our community, and I look forward to watching them fly.”

The school’s former namesake, poet Sidney Lanier, was also a Confederate soldier. So, in light of this summer’s Black Lives Matter movement – and a deeper understanding of why the school’s name is an affront to Black Americans – the School Board voted in September to rename Fairfax City’s middle school.

It did so after a three-month, public-comment period to collect feedback from the community. And more than 85 percent of those responding said the name should be changed. Nearly 300 suggestions for the new name were submitted, and an advisory team to Superintendent Phyllis Pajardo whittled them down to six.

The finalists were: Maya Angelou, Katherine Johnson, Legacy, Fairfax Woods, Independence and City. On Oct. 5, Pajardo presented these names to the Board; then during their Nov. 2 meeting, the members selected Johnson as the new name.

Born in West Virginia in 1918, Johnson always loved and excelled at math. She started high school at age 10 and graduated from college at 18. She was also one of three Black students to integrate West Virginia’s graduate school in mathematics.

In 1952, she joined the all-Black computing section at the National Advisory Committee for Aeronautics (NACA). Five years later, the launch of the Soviet satellite Sputnik refocused Johnson and the U.S. on the race for space, and she became part of NACA’s Space Task Group which later became NASA.

She was a team member who worked on various space projects. And according to NASA, in 1962, Johnson “was called upon to do the work she would become most known for” – preparing for Glenn’s orbital mission and controlling the trajectory of his Friendship 7 capsule mission from liftoff to splashdown.

With the introduction of IBM’s calculating machines and the glitches accompanying them, Glenn famously asked engineers for Johnson to run the numbers before his takeoff. “If she says they’re good, then I’m ready to go,” he said. The flight was a success and marked a turning point in the space race between America and the Soviet Union.

JOHNSON retired in 1986, after 33 years at NASA. And in 2015, she was awarded the Presidential Medal of Freedom, America’s highest civilian honor, by President Barack Obama. After her death this February, at age 101, NASA Administrator James Bridenstine said, “She was an American hero, and her pioneering legacy will never be forgotten.”

Pleased to have Fairfax’s middle school named after such a special and accomplished woman, Pajardo said, “Katherine Johnson has been an inspiration to me for many years, and I know she will be an inspiration to our students. I look forward to working with the Board and the school community to dedicate the building to this extraordinary person in the spring.”