‘A Signature Place Where People Want to Be’ in Fairfax City 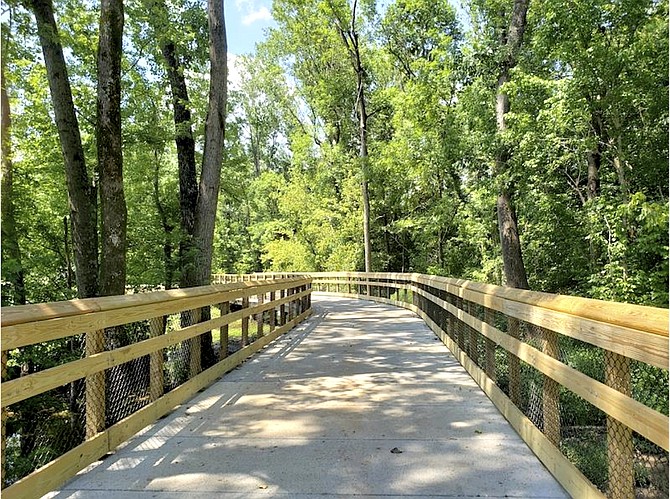 Example of a trail section with a boardwalk and railings.

This is what the retaining wall would look like.

Work is progressing on the George T. Snyder Trail project; and on Oct. 13, residents got to comment on it during a Fairfax City Council public hearing. First, though, Parks and Recreation Director Cathy Salgado presented an update.

It’s a shared-use trail connecting Chain Bridge Road (Route 123) to the Wilcoxson Trail at Draper Drive, south of Fairfax Boulevard (Route 50). It’ll be an ADA-compliant, asphalt trail with some sections of porous asphalt and others, concrete boardwalk.

Five bridges will span small tributaries and Accotink Creek, and part of the project will be constructed within Fairfax City parks. The trail will be 8-10 feet wide, and there’ll be no blind spots at bridge approaches. It’ll also improve regional trail connectivity within the City, with a design aimed at limiting impacts to environmental resources, right-of-way and utilities.

“We want this to be an experience for our residents,” said Salgado. “We want them to be able to enjoy the environment and being outdoors.”

The $14 million project is being built with more than $13.6 million in Outside the Beltway I-66 Concessionaire funding, plus $360,000 in federal, Congestion Mitigation and Air Quality money. It’s nearing the 65-percent design stage, which includes plans for not only the trail and bridges, but retaining walls, drainage improvements, stormwater management, lighting, landscaping and erosion/sediment control.

THE NEW TRAIL will connect to existing trail segments at Marketplace Boulevard, Stafford Park, Ranger Road Park and Draper Drive Park, connecting to neighborhoods, as well as to the City’s commercial corridor. And Salgado said disturbances to the Resource Protection Area and floodplain will be minimized.

Besides the trail realignment, raised crosswalks and new signage would be added to neighborhood intersections. Dark-sky-friendly lighting is planned for just the intersections and trail junctions. Boardwalk sections will have retaining walls and railings, and the bicycle/pedestrian bridges will be 14 feet wide, with concrete decks.

Retaining walls of varied heights, ranging from 3-17 feet high, will be built between the trail and private properties and will also reduce grading impact to the forest. Viewing areas, educational markers and rain gardens are also included in the project. Construction bids are proposed for advertisement in winter 2022 to be awarded that spring.

The most controversial part of the trail project is the plan to uproot hundreds of trees. “More than 1,200 trees were surveyed, and 500 trees will be removed within 1.4 miles of trail,” said Salgado. Some 40 percent of them are tulip poplars and red maples. But they’d be replaced – in a minimum, 1:1 ratio – with a wide variety of native trees and plantings.

“I’m concerned we’ll lose 500 trees – about 42 percent of those surveyed – even with the one-for-one replanting,” said Councilmember Sang Yi. “We’ll lose 7 percent of the tree canopy, because the new trees will be smaller than the ones there now. I hate to see good trees getting removed, and I’m glad an independent arborist will assess the plan.”

CALLERS during the public-comment portion of the meeting had mixed reactions to the overall proposal. Sarah Ross, with the Parks and Recreation Advisory Board, said building this trail and its connections to other parts of the City carries out Fairfax’s motto of “Live Life Connected.”

“We strongly support this,” said Douglas Stewart of Fairfax City Citizens for Smarter Growth. “It’s a great, multiuse trail for people and has the potential to be a signature place where people want to be. It’ll connect to Northfax and to regional trails, too, without people having to drive.”

However, he added, “We’re concerned about the eastern transition to Fairfax Boulevard. The sidewalk at Draper Drive should be widened and the intersection improved to make it safer for pedestrians.”

Judy Frasier, though, was opposed to the project. “Fourteen million dollars and 7 acres of forest will be lost for a 6-minute bike ride,” she said. Frasier also didn’t like the asphalt that would be added and said dead trees should be left alone because they “provide incredible habitat for animals and birds.”

Agreeing, Katie Johnson urged the Council to “Reconsider the trail’s alignment to diminish the tree loss.”

But Sonya Breehey, president of the Fairfax Alliance for Better Bicycling, supported the trail. “We must do all we can to get people out of their cars,” she said. “And a connected trail system does just that.”