Residents from the 1960s and on share their favorite things about living in Springfield and Burke. To some, it seemed the perfect place to raise a family and become active in the community. To others, it was their childhood home, or where they met the love of their life. To all, the area is a special place.

Judi Foster, retired federal government worker, 56 years in Springfield: “We looked around at a lot of different places before we moved to Springfield; we looked in Maryland, we looked around in Burke. This was so close to I-95. They built the little developments and then each little development had their own school, so we had Keene Mill School and Washington Irving, then West Springfield was built. We’ve kind of watched it grow up. It was a convenient place to live and there were lots of churches around. Springfield United Methodist Church was the center of our life. It was the big church at that time for the Methodists. We’ve been active there for 60-some years. We decided to stay here when we retired. Our family was here—why would we go anyplace else? The church was here, [Springfield Golf and Country Club] was here, we’re 20 minutes from the airport. The people were nice… we just kind of settled in and got active in the community.” 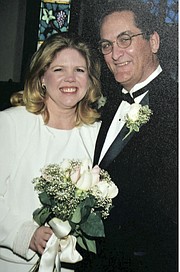 Don Worthington and Parris at their wedding

Don Worthington, editor of the Pageland Progressive Journal, 22 years in Springfield: “Growing up in North Springfield in the 1960s-70s offered many of the All-American opportunities. I played baseball for the North Springfield Little League… and basketball and football for the Braddock Road Boys Club. The first time I ever saw my name in print was in the Springfield Independent for scoring eight points in a basketball game. As Cub Scout, I marched in the annual parade of scouts past George Washington’s tomb on his birthday at Mount Vernon. Growing up near Washington, D.C. also nurtured a life-long interest in politics. I fell in love with the girl with the long blonde hair. We played in the sixth-grade band, learned to tumble in the afterschool program, and by high school seldom did an afternoon go by without one calling the other. About 22 years ago, I found her name in a Charlotte phone book while waiting for an interview at the library in Winchester, Va. She had no clue who I was. Thankfully, my mother-in-law did. That October, at North Springfield Elementary School, I proposed to her. Three months later we were married after a snowstorm in Charlotte, N.C. Our best wedding pictures are of the snow ball fight we had. On June 21, 2019, Candace Grace Parris died from diabetic complications. I miss her every day.” 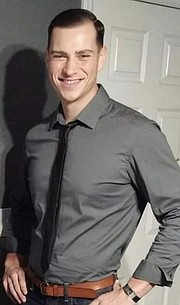 John Brody, scout sniper team leader in third battalion, fourth Marine regiment, 18 years in Springfield: “I grew up in Springfield and graduated from LHS [Lee High School] in 2013. My mother’s side of the family can trace their lineage in the Anacostia area deep into the 1600s, and my father moved to Springfield in the 70s from Lancaster, Pa. I enjoyed the growing diversity from the influx of post 9/11 jobs to what used to be a smaller town, the highly competitive sports (West End Rugby, state champions many times, national champions right after I left), and growing up within walking distance of the Saratoga Pool. I grew up playing baseball for Central Springfield Little League and then Lorton Little League until I got to high school where seasons conflicted and I dropped baseball for rugby. My first real job was a delivery driver for the Zpizza that used to be right across from the Springfield Mall in the Home Depot shopping center. I’m thankful and blessed for my time there.” 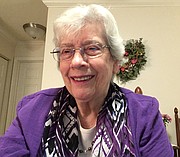 Jean Mosteller, retired Fairfax County teacher, 54 years in Springfield: “We moved from California to North Springfield in 1966 and though we haven’t lived there since 1985, [we] still own and rent out our house there. A friend of my mother’s… told mother that we ‘had to look for a house in North Springfield’ where her Army son lived. ‘Great schools.’ We had four kids: 2nd, 3rd, 4th, and 7th grades. However, we had great Army friends, the Cauthens, who had moved from Livermore to DC about six months ahead of us and lived in, guess where. Springfield. She [Shirley Cauthen] had a friend who was living in a rental house in North Springfield and needed to get out of her lease. So we sublet that house for six months. Were so in love with North Springfield by then that we bought a house there at the end of the lease. In addition to those great schools, there was a super Little League, great scout troops and the community pool with lessons and swim and dive teams. And LOADS of kids everywhere! We lived in that house for 20 years. The Cauthens also introduced us to Springfield United Methodist Church where I’m still an active member. We sat on the SUMC front lawn each Fourth of July and watched spectacular fireworks in the field across Old Keene Mill Road (where the parking lot for Springfield Plaza is now)!...” 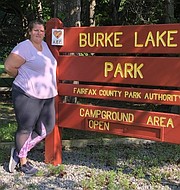 Cindy Agner, teacher, 41 years in Burke: “My husband and I are both Burke natives. I have actually lived in the same neighborhood for almost 41 years, and my dad has lived in Burke pretty much since he was 18. He remembers it when it was all farmland! I would say my favorite thing about Burke is that it is close enough to everything, yet you can go on walks along all the various paths and think you are miles from civilization. My mom and I used to go play bingo at the firehouse before she passed away. I am a member of Burke Presbyterian Church—have been my entire life. My dad was a volunteer firefighter at the Burke Fire Station. My husband teaches at Lake Braddock, and my daughter is going to be a junior there. She is on the varsity field hockey and lacrosse teams, so we are involved in athletics in Burke!”

Dan Tompkins, writer and editor for the federal government, 30 years in Burke: “I grew up in the area, in Willow Woods subdivision off of Guinea Road in Annandale. As a kid I could bike to Burke Village, which back then was little more than the post office and a general store. [Kathy and I] have lived in Burke since the 1990s, when we bought a townhouse in Burke Burke Center. In 1993 we bought the home we live in now, in the Homewood section of Burke, where we raised our three sons. Burke has been a fine place to live, work and raise a family. Our neighborhood is wooded, quiet and friendly. Sometimes it feels like a refuge from the hustle and bustle, yet it is close enough to the city to be convenient. The boys benefited from good schooling all the way back to… Kings Glen Elementary and then at Lake Braddock. We jokingly call Spartan’s Restaurant our second kitchen. You can get an honest meal for a decent price with friendly service. We also love Hunan West in the King’s Park Shopping Center. It’s been our go-to for Chinese for many years. For Thai food we like Panisa… and Yindee Thai. We are also fans of Village Chicken. But yes, we do cook at home also! Each spring we stock up on impatiens from the Burke Garden Center. We love the parks in and around Burke.”