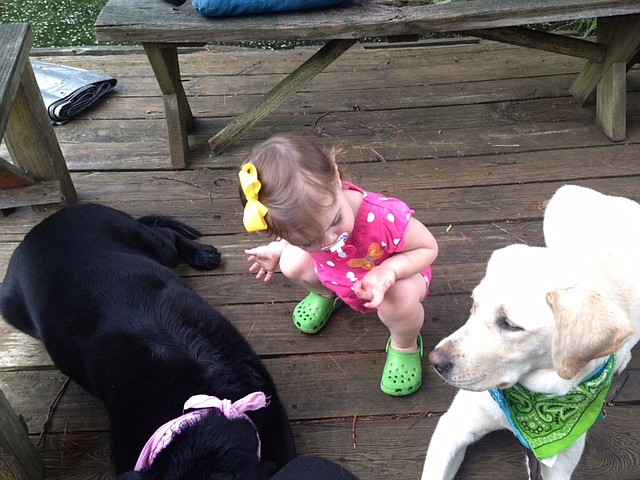 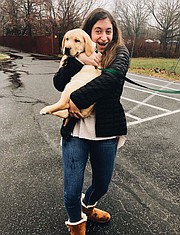 Felicity Brock and Beekman: An avid participant in her community and long-time dog lover, Felicity Brock strives to give back any way she can. So, when she found the Guide Dog Foundation, a company committed to providing guide dogs and training — free of charge — to individuals who are blind or visually impaired, she was beyond ready. From “gotcha day” to when they both go off to college in a year, Felicity and Beekman are unstoppable. For Beekman, this means further training with the Guide Dog Foundation. Beekman is now 5 months old and loving his old town neighborhood. Felicity is a junior and varsity rower at T.C. Williams High School. Check out https://www.guidedog.org for more information on how to get involved. — Deidre Brock 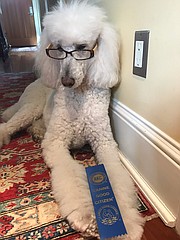 Raya with glasses and her AKC CGC Ribbon. 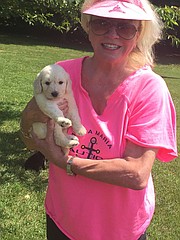 Bailey: My wife, Judie Jolly and our (then, two years ago) new puppy, Bailey (named after the Irish Cream) when she (ha ha — the puppy!) first came home! — Thomas R. Jolly 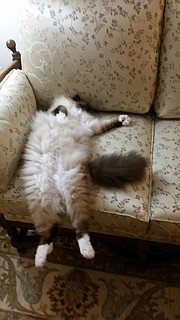 Cowboy: This is Cowboy after having a rough day of eating and eating and more eating. He is 5 years old and rules our home. — Lee Gutwald 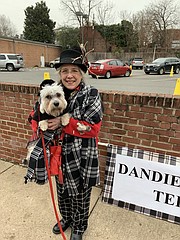 Molly: My beloved dog Molly enjoying her 15th birthday a few weeks before she went “over the rainbow bridge.” She is held by her dear friend Rosie Walters. Molly is missed by all her many dog and human friends, especially me, Carol Siegel. 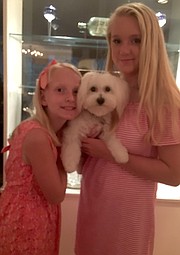 Gizmo: Serena and Claire Sharman with their Maltichon, Gizmo. Gizmo loves walking Serena to Lyles Crouch school every morning and receiving a treat and big smile from principal Dr. Zissios.

Raya ‘Being of Service’: The story begins 12 years ago in Chicago with Kaden (meaning companion) our first standard poodle. What a companion he was! Three years later along came his puppy Raya (meaning friend). When Kaden passed in November 2017, we were brokenhearted. Raya was lost without her daddy so we decided to get into service in our community. Raya took her AKC CGC (Canine Good Citizen) test with Brad at Olde Towne School for Dogs and she sprung into action. Her journey began with the kids “Reading to Raya” at Hooray for Books. She regularly visits her friends at Silverado Memory Care Community. Thanks to everyone there her fun, loving spirit is back! We now have the next generation of standard poodles in Jax (meaning God has been gracious). He is 9 months old and being well trained by Raya to be of service. – “People before Poodles” – Your Poodle Pals, Raya & Jax – Kaden will never be forgotten

When Karen Met Rosie: In January of 2017, I took a test at the American Kennel Club website called ‘What Kind of Puppy is Right For Me?’ and was informed my next pet should be a Dandie Dinmont Terrier. I googled the breed and saw this intriguing-looking creature that resembled a Yorkie Terrier and Dachshund. Having grown up with Dachshunds, I was smitten and immediately decided I had to have a Dandie!

Bred on the border lands between England and Scotland to hunt badgers and foxes, Dandie Dinmont Terriers are named for a character in the 19th century Scottish novel, “Guy Mannering,” by Sir Walter Scott. The breed itself is more than 300 years old and is considered a ‘desperately endangered’ with less than 87 puppies born in the UK in 2017. I learned quickly how rare this breed truly was as I searched for puppies here in the USA. I was deep in planning my first trip to Scotland that May and realized a major Dandie event was taking place during my visit there, Hainings 2017 the celebrated birthplace of the breed. Thinking I might be able to find a pup during my visit, I began searched high and low for local breeders, to no avail. Returning empty handed, I abandoned my Dandie search in June and concentrated on other breeds, Corgi's, Frenchie's and King Charles spaniels.

In late October, I was planning a drive to Pennsylvania to inspect a litter of Corgi's and did one final google search 'Dandie Dinmont Puppies.’ To my shock and delight, a single facebook page pops up in Iowa where one puppy remained from a litter born the last week of June, precisely the time I abandoned my Dandie search. Her name was Rosie. Less than one week later, I was picking up my scared little girl from Dulles Airport. Having a love of all things Scottish and moreover, Outlander, I finally landed on a name that honored my little girl and things I love, as well; ‘Claire's Rose My Yankee Doodle Dandie.’ Claire for the main character in my favorite Outlander novels by Diana Gabaldon; Rose for ‘Rosie;’ and My Yankee Doodle Dandie.

Rosie is a graduate of the Old Town School for Dogs, and she even convinced the Dandie Dinmont Terrier Club of America to join in Alexandria's famous Scottish Walk Parade! I can’t walk her down King Street without people stopping to ask about this intriguing little pup. Rosie is helping to bring much needed attention to this rare breed of terrier and more than a few smiles to Old Town. 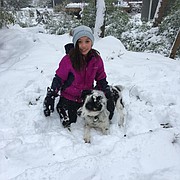 In Hollin Hills: Emi Martin, age 8, and Bobby Martin, age 16. Bobby came to be with us after he was rescued from a high kill shelter in central California. He was 7 years old when we brought our daughter home as a baby, and he initially barked and lunged at her. Gradually, they became best pals, and now at 16 years old he loves her with all his heart. He has lived in California, Nevada and Arizona, and has hiked all over the country, but these days he lives a quiet retirement, taking daily walks in Hollin Hills, snuggling with his sister Emi, and napping. — Nicole Whiting 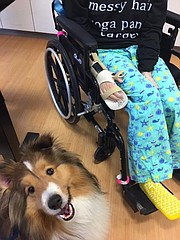 Brio, a Sheltie, enjoys his visits to the Rehabilitation Unit at Mount Vernon Hospital where he has been a certified therapy dog for almost five years. He likes to entertain patients and staff with his tricks. — Angelita Kabler 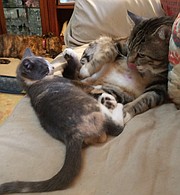 A long time ago in a galaxy far, far away...

A long time ago in a galaxy far, far away…Ella Noelle was a tiny abandoned kitten rescued at the local garden center Hollywood and Vine. She quickly found her new family, as well as the warm and welcoming lap of Nickolai, a previously adopted street stray. Although she thoroughly adores her older brother, I could not help noticing the uncanny resemblance to the Star Wars characters Jabba the Hutt and Princess Leia! (Buster Bob rests in the background on a cushion). — Leah Dymek 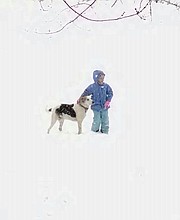 Shiloh: Shiloh and his best friend and neighbor, Ainsley Estenson, during a February 2015 snowstorm. They look so isolated and lost in a vast and desolate winter snowscape, but they seem to know they can always depend upon each other. The glacial setting is my Stratford Landing front yard. — Leah Dymek