Lawmakers negotiate behind closed doors on how to curb police use of chokeholds. 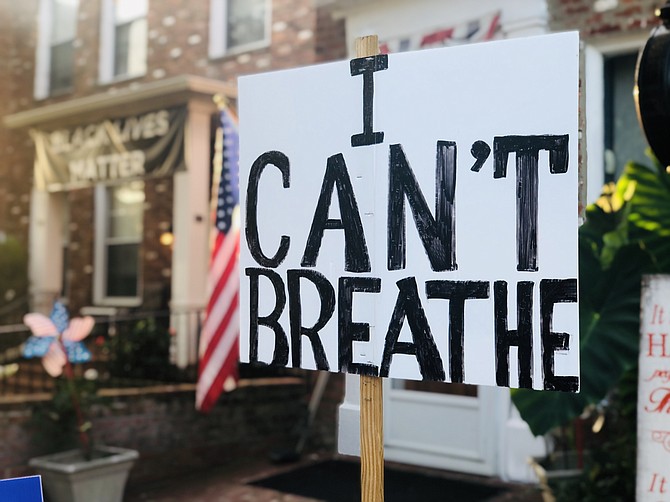 The Black Lives Matter movement began using ‘I can’t breathe’ in 2014 to honor Eric Garner, an unarmed Black man who was killed in a chokehold by police in New York City. Photo by Michael Lee Pope.

When lawmakers began their special session on criminal justice reform in August, hopes were high that the General Assembly would send the governor a bill that banned police from using chokeholds. At the time, protesters across the country were demanding change in the wake of the death of Geroge Floyd, an unarmed Black man who died when a Minneapolis police officer kept his knee on his neck for 8 minutes and 15 seconds.

But now that the protesters have gone home and the lawmakers have moved behind closed doors to negotiate in a secret closed-door conference committee, advocates for criminal-justice reform are worried about what will emerge in the conference report that will be presented to the House and Senate.

At issue is how chokeholds will be limited, and lawmakers are divided over what approach to take. The House approach is to outlaw the use of chokeholds by law enforcement officials, sending a policy statement that police officers and sheriff’s deputies are not allowed to use neck restraints. The Senate approach would prohibit the use of chokeholds by removing the lawful force defense, allowing officers to be prosecuted for strangulation while also avoiding adding a new felony offense that would apply specifically to law enforcement officials.

“We like the House version better,” said Claire Gastanaga, executive director of the ACLU of Virginia. "It’s very clean. It just says you can’t use a neck restraint in carrying out your official duties. Period. End of sentence. It’s a felony.”

“The Senate bill says law enforcement officials get treated like everybody else when it comes to felony strangulation,” said Sen. Scott Surovell (D-36), who is overseeing policing reform in the Senate. “Not only does it institute a chokehold ban, where an officer could be decertified or fired or demoted, but it also creates the possibility they could be charged with a Class 6 felony.”

House members are pushing for a separate criminal penalty for police officers and sheriff’s deputies who use chokeholds. They disagree with the Senate approach, which they worry would be limited to decertification or termination of officers who use neck restraints. But they’re also entering the conference committee negotiations with a group of senators who have already drawn a red line that they will not allow the creation of a separate felony offense for chokeholds. Some House members see that approach as inconsistent with other actions taken during the special session.

THE DEBATE OVER CHOKEHOLDS comes at a time when lawmakers are sending a flurry of bills to the governor, everything from the civilian oversight of police officers to sensitivity training. For some Republicans, it’s too much too soon. During a debate about policing reform last week, several senators vented their frustration with the pace of reform happening in the General Assembly.

“I’m quite convinced that perhaps the Senate needs some sensitivity training,” said Sen. Siobhan Dunnavant (R-12). “There’s an inherent bias that I’m hearing, using some of the language we’ve heard, toward our police force.”

“I don’t think that police reform needs to be signed off on by the police.”

Here in Alexandria, Black people are 23 percent of the population and yet most arrests in the city are of African Americans. Most cases when police use force are against Black people. Most drug arrests are of Black people. And almost half of the inmates at the Alexandria jail are Black people. Democrats say the death of George Floyd and the protest movement that emerged in its aftermath have created a moment to take action against systemic racism and police brutality.

On the issue of chokeholds, organizations that advocate on behalf of police agencies stand in opposition to the House approach of creating a separate felony offense that would apply specifically to law-enforcement officials. They warn that limiting the way police officers and sheriff’s deputies go about their work would be a dangerous move. During hearings on Carroll Foy’s bill, they testified her approach would create confusion and cause hesitation.

“We don’t use neck restraints, and we don’t advocate for them,” said Wayne Huggins, executive director of the Virginia State Police Association. "But there needs to be an exemption for those life-and-death situations where no other alternative is reasonably available.”

Although interest groups representing law-enforcement agencies stand in opposition to the House approach, they worked with senators in crafting an omnibus approach to policing reform that has their support. That support gives senators more leverage in their closed-door conference committee negotiations with House members, but it also creates suspicion among advocates who are concerned that law-enforcement interest groups are calling the shots on reforming law enforcement.

“I don’t think that police reform needs to be signed off on by the police,” said Andy Elders, deputy public defender in Fairfax County. “During this special session, I’ve heard people say you don’t want to second guess police officers and you don’t want to tie their hands. But if we’re going to preserve the rights of the people who come into contact with the police every day, you have to second guess the police sometimes and you have to tie their hands.”