Lawmakers to consider putting pretextual stops in the rearview mirror. 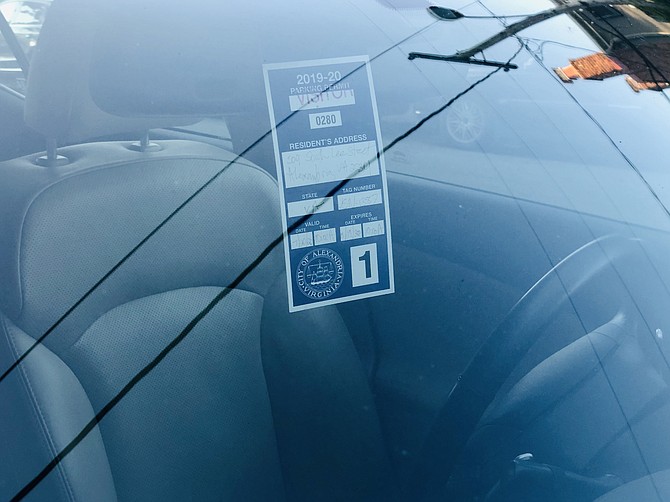 Do you have a parking pass dangling from your rearview mirror? What about rosary beads or a graduation tassel? Police officers can use that as a pretext to pull you over and ask to search your car. Photo by Michael Lee Pope.

It was shortly after 2 p.m. on a clear chilly spring day several years ago in Southside Virginia when an officer with the Waverly Police Department noticed something dangling from the rearview mirror of a green sedan on Route 460. The white officer decided the dangling object, a 3” by 5” parking pass for nearby Fort Lee, was a pretext to pull over the vehicle carrying two African American men. The officer ended up searching the vehicle, finding drugs and arresting both the men — all because a parking pass for Fort Lee was dangling from the rearview mirror.

Roskin tried to suppress the evidence obtained in the traffic stop, arguing that it was an unconstitutional infringement of his client’s Fourth Amendment rights. If the police officer was legitimately concerned about the parking pass obstructing the view of the driver, Rokin argued, he would have checked to see if it was blocking the line of sight. But the officer’s own testimony proved that he did not do that. The case made it all the way to the Supreme Court of Virginia, where justices ruled in favor of the police.

“Why did they stop this vehicle as opposed to the others?” asks Roskin. “They don’t have to say honestly that they thought there was something special about this particular hanging object that made them want to stop it as opposed to the hundred others that you might see everyday on the road.”

PRETEXTUAL STOPS have raised concerns about racial profiling for years, and advocates have called on lawmakers to crack down on police officers pulling over vehicles for tinted windows or loud exhaust. Now that members of the General Assembly are returning to Richmond, they’ll be considering several measures aimed at cracking down on pretextual stops like the one in Waverly. Del. Mark Levine (D-45) is considering a bill that would prohibit officers from stopping vehicles for anything other than a moving violation.

“There’s a long history of police stopping someone for driving while Black or driving while Black in the wrong neighborhood or driving a car that doesn’t look like it belongs there,” said Levine, who is chairman of the Public Safety Subcommittee. "They use these pretexts to ask for a search, and sometimes these things can lead to very deadly outcomes.”

House members are still taking testimony in advance of the session, although senators are taking a different approach. They’re already knee-deep in drafting legislation. Sen. Scott Surovell (D-36) says two bills are in the works on pretextual stops. One would prohibit officers from searching someone based on the odor of marijuana, the pretextual stop that has attracted the most attention in recent years.

The bill would also prevent officers from pulling over vehicles based on things like tinted windows, loud exhaust or objects dangling from the rearview mirror. A separate bill would allow the attorney general to force consent decrees for localities that engage in racially biased policing.

“If you have a department that’s engaging in lots of pretextual stops, it’ll play out in the data. That’s racially biased policing,” said Surovell, who is spearheading the Senate’s effort on criminal justice reform for the special session. "If they seem to be stopping black people a lot for not using their turn signal but not any white people for it, that’s what you need a consent decree for.”

REPUBLICANS ACCUSE Democrats of hypocrisy, pointing to several new pretextual stops they’ve added in recent years. For example, police officers can now pull over vehicles if the driver is talking on a cell phone or if a passenger in the car is not wearing a seat belt. They can also pull over a vehicle if a child is not in a car seat. These are some examples of recent additions to the code Democrats supported for so-called primary offenses, actions that can now serve as a primary reason for an officer to pull over a vehicle.

“When I got to the General Assembly in 2003, there were people on the Democratic side of the aisle who were concerned about giving police pretexts to stop people,” said Sen. Mark Obenshain (R-26). "Sometime along the way, those concerns evaporated and were consumed by a desire to change people’s behavior.”

During the discussion about cell phone use, for example, Obenshain said making it a primary offense would lead to police officers being able to pull over any driver on the suspicion that they might have been touching a cell phone. He lost that argument. And now that the criminal-justice reform effort is shining a new spotlight on the issue, he says lawmakers should take a look at all the other pretextual stops and be consistent about the issue.

“All of a sudden these defund-the-police activists in the General Assembly have decided that we need to crack down on pretextual stops by police,” said Obenshain, who is a member of the Senate committee that will be considering criminal-justice reforms during the special session. “If you’re concerned about pretextual stops, you ought to be concerned about it across the board, not just in limited circumstances.”

CRIMINAL JUSTICE REFORM has emerged as a political flashpoint after the death of George Floyd, a Black man who was murdered in Minneapolis by white police officers. That event touched off nationwide protests calling for reforms like better training for police officers and use-of-force standards. But Justice Forward Virginia points out that police officers in Minneapolis had escalation training, implicit bias training, use-of-force standards and three civilian review boards. Minnesota requires more than twice as many training hours as Virginia, an indication that training might not be an easy solution to the problem.

“The reason they’re pulling cars over at 11 o’clock at night is not because they’re worried about signaling. It’s because it’s part of their drug-enforcement strategy.”

“If we’re really going to solve this problem, we need to get at it at its root,” said Haywood, executive director of Justice Forward Virginia. “You don’t solve racism in policing by asking police officers to be less racist, and you don’t solve excessive force by asking them to be gentler when they take somebody into custody.”

Instead of focusing on new training requirements or new use-of-force standards, Haywood says, lawmakers need to focus on laws that enable police officers to focus on the laws that enable racist policing. The best way to do that is to reduce pretextual policing, which he says often serves as a cover story for officers to act on their implicit bias. That way police officers can stop Black people simply for having rosary beads dangling from their rearview mirror or a license plate tag light that’s not working.

POLICE OFFICERS have hundreds of reasons they can use as a pretext for pulling over Black people, everything from a high-mount brake light that’s not working to a Washington football team license plate frame that partially obscures a license plate. The way Virginia law works right now, officers don’t need to be certain that a violation of the law is happening. All they need is essentially a hunch that a parking tag from Fort Lee might be obstructing a driver’s view of the road.

“The reason they’re pulling cars over at 11 o’clock at night is not because they’re worried about signaling,” said Andrew Elders, a deputy public defender for Fairfax County. "It’s because it’s part of their drug-enforcement strategy.”

Elders remembers a case back in 2006, when he represented a man who was pulled over because he had an object dangling from his rearview mirror. The officer found drugs in the car, and the man was charged with possession of marijuana. When the case got to court, the police officer could not remember anything about the dangling object that served as the pretext to the traffic stop — nothing about what it was or how big it was or where it was. Elders tried to suppress the evidence gathered in the stop, but the judge allowed the case to move forward anyway.

“Nobody in my neighborhood gets pulled over for that stuff, and that’s what this is all about,” said Elders. "It’s not about the thing. It’s about stopping the person in the car and wanting to ask them some questions because you think they are the kind of person who might be committing a crime.”