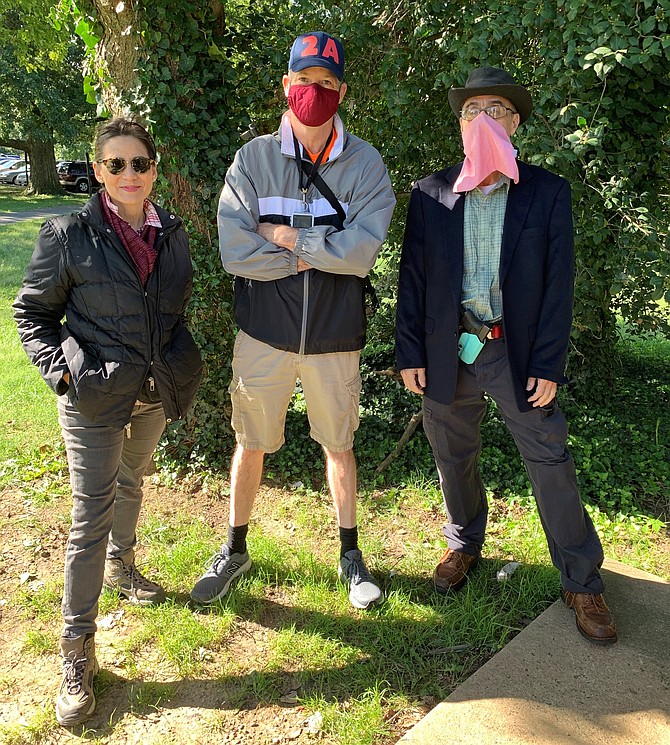 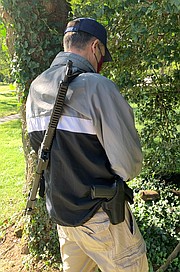 A group of Fairfax County residents gathered Sept. 19 at the Dyke Marsh Wildlife Preserve for what was billed as an open carry hike along the Mount Vernon Trail in protest of the recent Board of Supervisors vote to ban guns on public property.

“We are here to support the Second Amendment and to protest the gun restrictions passed by Fairfax County,” said organizer Michael Parker, a retired Army officer and 22-year county resident. “We are expressing our Constitutional rights and the right to protect ourselves in public spaces.”

The Fairfax County Board of Supervisors voted Sept. 15 to ban guns on public property. Under the new regulations, guns will not be allowed in county buildings, community centers, or at parks and recreation facilities.

Exemptions to the ban include sworn law enforcement officers, ROTC and collegiate sports participants, educational county programs and events, and the Bull Run Public Shooting Center. Violators would face a misdemeanor that carries a penalty of up to one year in jail, a fine of up to $2,500 or both.

“This ban is taking away the ability of ordinary citizens to protect themselves in public spaces.”

Fairfax County is among several jurisdictions, including Alexandria, Falls Church and Arlington County, to enact gun bans following the passage of a law by the Virginia General Assembly earlier this year to allow local governments to regulate firearms in certain public areas.

“The Virginia law was motivated by what happened in Virginia Beach,” said Parker, in reference to May 31, 2019, when a disgruntled city employee fatally shot 12 people and wounded four others in a mass shooting at a municipal building there. “But I believe this motivation is misplaced. Virginia Beach had already banned employees from having firearms in city buildings. An employee ignored that ban and killed the employees who dutifully obeyed that ban. Now Fairfax County is giving criminals the upper hand over its law-abiding citizens.”

Parker was among more than 80 speakers at the Sept. 15 Board of Supervisors meeting, which lasted nearly 10 hours. The ordinance passed 9-1 and went into effect immediately. Supervisor Pat Herrity (R-Springfield) was the dissenting vote.

“For 24 years, the Board has asked the General Assembly for the authority to make this decision,” McKay said. “I have long supported this action. Gun violence is a complex issue with no simple solution, but we must approve common-sense measures to protect our residents.”

“Criminals intent on committing violent crimes are not going to give a damn about this ordinance,” Parker said. “This ban is taking away the ability of ordinary citizens to protect themselves in public spaces.”