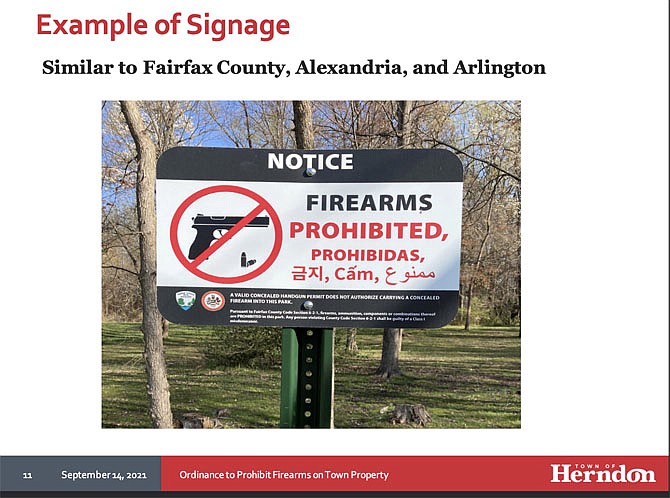 Herndon — The Town of Herndon's top elected officials are divided on proposed gun control measures. Cesar del Aguila, vice mayor of the Town of Herndon, favors an ordinance banning guns on town property and at town events, while Mayor Sheila Olem does not.

During the Sept.14 public hearing, supporters and opponents spoke out on Ordinance 21-0-10 to amend Chapter 46, Article II and create a new Section, 46-60, Possession of Firearms on Town Property.

If the Town Council approves the ordinance, it would be similar to one the Fairfax County Board of Supervisors approved nearly one year to the day, on Sept. 15, 2020. At that time, the county board approved the ordinance amending the county code "to prohibit the possession, carrying or transportation of firearms, components, and ammunition in county buildings, parks, recreation, and community centers, and at or adjacent to permitted events."

Exceptions to the Town's proposed ban include sworn or retired law enforcement officers, private security hired by the Town present and on duty, military personnel within the scope of their duties, and possession of a concealed handgun under a valid concealed handgun permit.

However, to be enforceable, clear signage must be "prominently posted at all town buildings, parks, events, and other locations where Ordinance 21-O-10 will be enforced to notify the public of the restrictions," according to Town Attorney Lesa Yeatts during her Sept. 14 presentation. If the gun ordinance is approved, year one fiscal impact is reported at nearly $3 million with an annual personnel cost of $744,600, according to the legal review provided during the meeting.

Vice Mayor Cesar del Aguila agrees with the County ordinance and the one proposed for the Town of Herndon. In an interview, del Aguila said it was one of the strategic initiatives he and others brought forward during council sessions after being sworn in on Jan. 1, 2021.

According to del Aguila, the proposed ordinance would "prohibit the possession, carrying or transportation of any firearms and munitions or components or combination thereof on town property in town buildings or uncertain other areas owned by the town."

"There seems to be a culture of gun violence in this country," del Aguila said. "For me…my personal belief and those from constituents… it makes clear people are not allowed to bring guns to Council Chambers. You can't bring them to Town Hall. And it's probably best not to bring them onto town parks."

"It's important to have consistency…If the county has their ordinance, we should not deviate from that to cause confusion," del Aguila added.

Mayor Sheila Olem opposes the town ordinance. In an interview, Olem said that her concern with the ordinance is that it addresses a problem that does not present in the Town of Herndon.

"According to our professional law enforcement staff, we do not have a problem with guns in our public town buildings or parks," Olem said. “Simply placing signs on town public buildings and at parks will not deter a crime from happening at that location and could encourage individuals to open carry to test our ability to remove them from the location."

Olem said the next public hearing on the matter is Sept. 28.

Town Council has received over 300 correspondences concerning the ordinance, however, many appear not to be from town residents.