Gun Sign in Springfield Seems Out of Place
Votes

The county-wide gun ban has been in place since last fall. 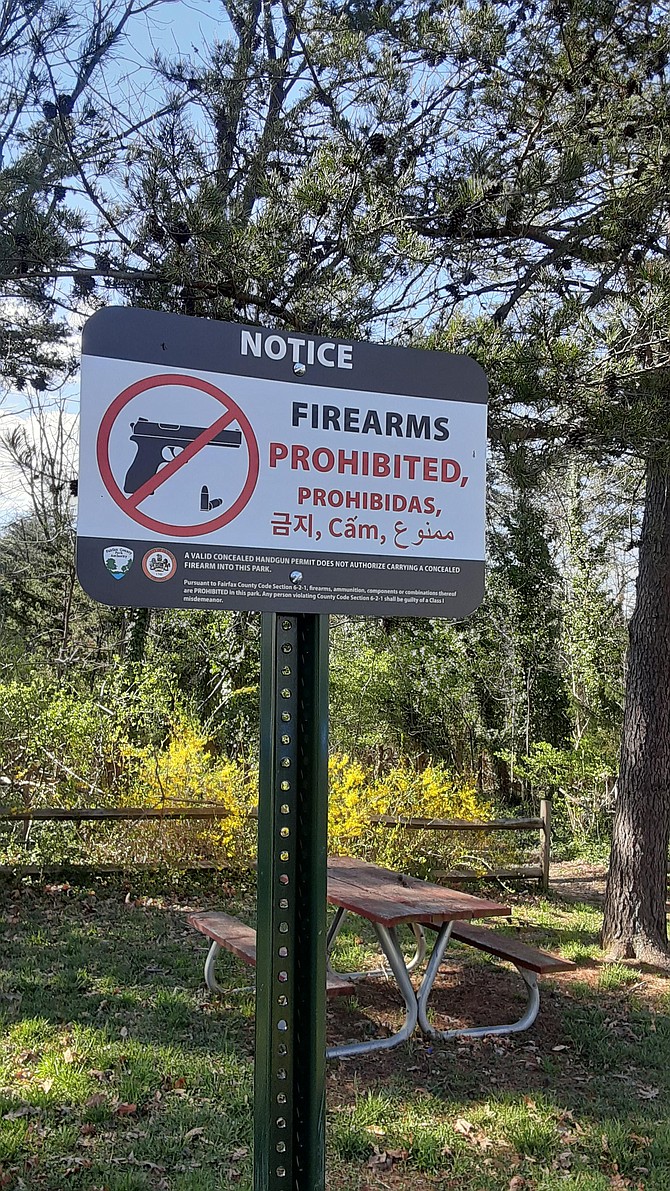 With the uptick in gun violence across the country, there’s no doubt that the presence of guns in a public place is drawing attention. Last fall, the Fairfax County Board of Supervisors approved an ordinance amending the county code, to prohibit the possession, carrying or transportation of firearms, components and ammunition in county buildings, parks, recreation and community centers, and at or adjacent to permitted events.

At Monticello Woods Park in Springfield, there is a sign reminding park goers that guns aren’t allowed in parks, but it seems out of place in such a tranquil setting.

According to Judy Pedersen, Public Information Officer at the Fairfax County Park Authority, guns are banned in all FCPA parks but the site must be posted and have signage. This sign is more common than it seems. "There are many parks that are already signed but with 429 parks it takes time to get the signs, and place them," Pedersen said. "It is an ongoing process," she said.

Changes to the ordinance last fall came after legislation passed during the Virginia General Assembly session and signed by Gov. Ralph Northam, allowing local governments to regulate weapons and ammunition in public buildings, parks and other areas, along with entities controlled by the locality. The Board of Supervisors has advocated for expanded local authority on guns in public facilities for decades, first including an initiative in the 1996 Legislative Program, county information said.

"The prohibition takes effect immediately. As required by law, the county will post signage at the entrances to all areas where firearms, components and ammunition are prohibited. Violations of the prohibition constitute a Class 1 Misdemeanor," the county website states.

There are 429 parks in the county and a sign prohibiting guns to be carried in the park is not posted in every park, but Monticello Park is isolated to some extent at the end of a road in a neighborhood that backs up to the Springfield Interchange. The park is in Lee District.

“Ending gun violence is not a simple problem with simple solutions. We must attack this issue from many angles including widely supported restrictions. Our Board’s decision to ban guns from government property takes us one more step in the right direction. For years, our Board has fought for this authority from the General Assembly and last year we finally won. I was proud to be able to finally cast my vote in support of this ordinance,” said Board of Supervisors Chairman Jeffrey McKay (D).